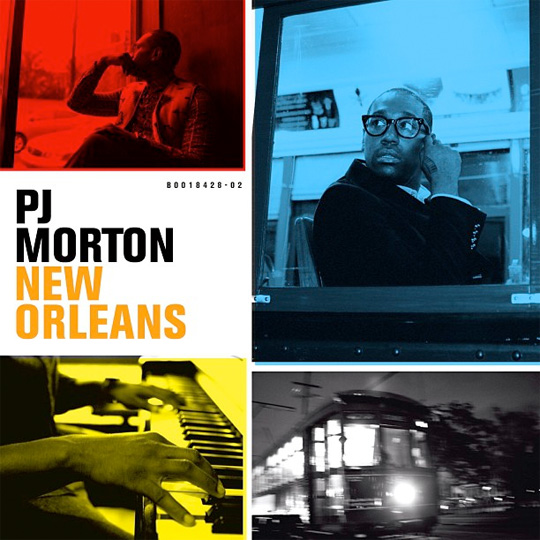 PJ Morton has won Grammy Awards and played some of the biggest venues in the country, but only recently has he started to gain the recognition he’s sought as a solo artist. After years of grinding independently, Morton caught the eyes of many and seized the opportunities, from songwriting for India.Arie to playing keyboard for Maroon 5 to signing with Mack Maine and Cash Money. The last encounter is what helped get his solo debut album New Orleans out.

The response thus far has been incredible, he says. “I’ve heard nothing but great things about the record from people so far, which is crazy, I’ve been working on this music for a while so now that everybody can finally listen, it’s kind of surreal. It’s been nothing but love.”

Life+Times: How gratifying is it for you to finally have your solo major label debut album out?
PJ Morton: It’s incredible man. I have been working toward this, I appreciate my journey, it taught me a lot about the game. But I think me having a machine right now is just perfect timing. It feel like the hard work didn’t go unnoticed, it led to this. In my mind, it’s still a marathon. Major label or not, I’ve still gotta work real hard to make sure that as many people in the world can see and hear what I’m doing. It actually humbles me even more to keep grinding.

L+T: What makes New Orleans music unique and how does that come out in your record?
PM: Well I think what makes New Orleans music unique is the only original form of American music was started there, you know. There’s a level of integrity that comes with New Orleans music. It makes you respect the music and the process. The reason I named the album New Orleans was less about the actual music and more about my mentality growing up in New Orleans; the innocence I had before I broke into the music business, before I understood radio spins, before I understood PR and all the other things that go along with it, the politics. At that point when I was growing up in New Orleans, I was just making music because I loved it and for no other reason, and I kind of took all the pressure off myself for this record and just made some stuff that I wanted to hear. That was the only qualification process for anything I put on this record. Just something that I enjoy.

L+T: New Orleans is out on Cash Money. How was it working with Lil’ Wayne and how is the opportunity to be on that label?
PM: Well at the time when we started having conversations, it was at the point where I had kind of exhausted all of my resources as an independent. I worked really hard, built a very cool underground following that I was able to tour own and still can forever on that. Those fans have been loyal to me. But at that point, I did want more, so when Young Money came to me, although it was outside of what they do, I was drawn to the situation number one because they’re a winning team, but also because they don’t touch the creative process. They’re very hands-off when it comes to the music you create, and that was a big sell for me. Also, the familiarity: Mack Maine and I went to high school together, so there was a relationship already there. I felt comfortable once we had conversations that they wanted me to be who I was and didn’t want me to change anything, and also be kind of the champion to help the label diversify. It’s pressure because I gotta win to show them that they should continue to do other things outside of what they’ve done, but it’s an honor and I’m down for the challenge.

L+T: How was it having the chance to work with Stevie Wonder. How did you feel about him coming into doing a song with him?
PM: Well it’s no secret, if you know me, you know that Stevie is my number one influence and has been for a long time. My father used to give me an allowance when I was about 12 and when I discovered Stevie, I used to go and buy his records every week. I started on Music Of My Mind probably and went in chronological order, bought all the music I could find. So having him on my record [“Only One“], it was full circle number one, and really, the biggest accomplishment I feel like I’ve had thus far. I couldn’t ask for more. I knew I wanted him on it, I think he fit the song, and it kind of had a Stevie-feel, but it was also a current thing; I wanted to bring him in my world. At this point, he doesn’t need a career co-sign or to do any features, so I reached out to a friend of mine that used to play drums for him and he got me to a person who worked for him, and he [Stevie] liked the song. He has to like it to do it at this point because there’s no other advantage for him to do it. He liked the song, did it – we didn’t record it together, I emailed it to him, he did it at Wonderland and emailed it back to me – and I still to this day can’t believe it. I just performed at his birthday party a few days ago and he came onstage and performed it with me. This is all still life-changing for me, it’s crazy.

L+T: How has your experience been working with Maroon 5? What have you learned from being part of the group?
PM: Yeah, I’m still in the band and we’re one of the biggest bands in the world right now. More than anything, it’s given me foresight on what’s to come. At this point, since I’ve been in the band, I’ve played the Grammy Awards twice, I’ve played SNL twice, all the night show, the Today show multiple times. So I think it’s really helped to prepare me for growth in my own career. It’s been amazing, those guys have opened their arms to me. I’m doing double-duty on tours this coming year – opening with my music and then closing with the band. It’s been an amazing ride.

L+T: With Maroon 5, Cash Money and other things you’ve come across, how have you been prepared and what makes you ready to capitalize on the opportunities when they present themselves.
PM: I think that’s the most important thing. People complain that they don’t get a shot, but then they haven’t done their due diligence for if that shot even comes across. Since the very beginning of my career – my first major placement was on an India.Arie record, that was the first Grammy I won; I was playing the piano in the lobby of an apartment complex and she came down and started singing and that how we connect, but since I was already in motion, we were able to connect and work, not just me miss that opportunity. Even with Young Money, they caught me in motion. I was already moving, I wasn’t sitting around waiting for a record label to come to me. I was doing as much as I could do with my own resources until something else happened. I think any company at this point, whether you’re an artist or anything, wants someone who is already in motion and trying to get as much done as they can on their own before they’re willing to team up with it and invest in it.

L+T: With you album out now and all of your other accolades and achievements, how do you stay hungry? What would you still like to conquer?
PM: Being able to play the 20,000 or 100,000 people with Maroon 5 is great as being part of the band, but I still haven’t reached that as a solo artist. I still haven’t touched that many people. I’m a Grammy Award-winning songwriter, but it still wasn’t for my song. So I still have aspirations to get those Grammy’s. I’ve played Saturday Night Live twice with Maroon, but I still want to play SNL solo. God has given me a glimpse of all of these amazing things, but I have so much work to do. I’ve gotten far in some people’s eyes and I’m appreciative – if I didn’t do anything else, I’d be appreciative – but there’s so much work that I gotta do and wanna do. I’m still hungry man, I’m still on that indie grind.