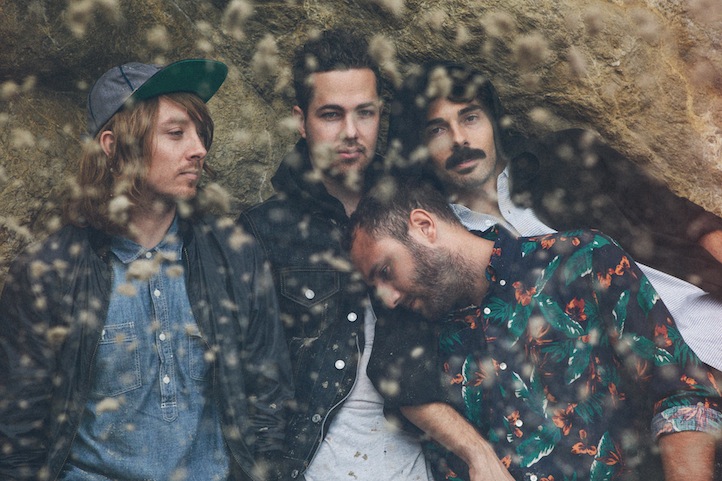 It is said that a person’s life experiences aid in shaping their character. This has certainly proved to be the case with the California-based indie psych-folk band, Local Natives. Matt Frazier (drummer), Kelcey Ayer (singer/keyboardist), Taylor Rice (singer/guitarist), and Ryan Hahn (singer/guitarist) have ridden on quite the emotional rollercoaster since their 2010 release of their debut album, Gorilla Manor. In 2011, Ayer’s mother passed away and former bassist Andy Hamm decided to part ways with the band. The two aforementioned life changes served as key inspiration for their newest album, Hummingbird. The innocence of Gorilla Manor is replaced by a more somber, mature, and retrospective motif on the latest sophomore album. Refreshingly, the quartet did not lose their signature multi-layer vocal harmonies and robust drum notes that merited their initial listeners. Light at the end of the tunnel has come by way of Hummingbird’s debut at #12 on the Billboard 100 Chart and landing a set at this year’s Coachella Music and Art Festival – not to mention growth in character and musicianship. Who better to explain Local Natives’ future than guitarist Taylor Rice who has been a part of the band’s journey since the beginning?

Life + Times: How is the tour? Excited for Coachella?
Taylor Rice: We’ve been on this U.S. tour for a while now. It’s our first tour with Hummingbird out. It feels like we’ve had all these songs caged up for so long and we finally get to let them out. It feels good. We’ve been looking forward to Coachella for months and months and months. We have the most incredible spot. We’re playing right at sunset. We’ve been talking about it every day for weeks. I’d say we’re excited.

L+T: On the new album (Hummingbird), you guys worked with Aaron Dessner (The National). What was it like going from self-produced to working with a producer?
TR: It was scary at first. We were apprehensive about it. We were talking to a producer and nothing was feeling right. We had just done a tour with The National and that’s where we met. We hit it off immediately. We were chatting about our record and Aaron was a fan of the band. We talked about songs and things. The reason why it worked for us is because it didn’t feel like signing up with a producer. It felt like signing up with a friend of ours that we just met. So, it was a lot more natural transition. He was great at becoming a fifth band member for that time period and stepping in when we were comfortable having him step in.

L+T: Hummingbird was recorded in New York. In light of everything that took place – from Andy’s departure to Ayer’s mother passing away, do you feel that recording in New York versus California was a breath of fresh air?
TR: Yeah, exactly. I actually haven’t thought about it like that. That was definitely part of the psychology behind that decision. We really wanted to be in a place that was different. We wanted to be somewhere new. We wrote the record in LA, in our home. So, most of it does stem from there. When we went to actually go record, we wanted to be in this new place and have this new surrounding. With a changed environment like that, it can enable you to open up as different persons and not be stuck in your comforts. That’s why we wanted to leave and go somewhere new.

L+T: You’ve been with the band since the start. In way do you personally feel you have developed even more as an artist?
TR: One thing that was helpful in me growing, well, all of us growing was…we’re so lucky to go on tour for so long for Gorilla Manor. That enabled us to go all over to world and play festivals everywhere and see dozens of amazing bands. I think you pick up little things when you’re on the road. For me, it feels more like evolution. Growth is not this straight path for us. It’s more of an evolutionary thing where you open up to more possibilities that’s more of this broader palette that you can draw from – that makes it a richer experience. I really felt that with Hummingbird. Hummingbird draws from such a deeper, more complex range for me as a songwriter.