Multitalented artist, Melissa “Lizzo” Jefferson, is weird. She’s not the kind of weird that draws you away from her, but it’s the right amount of quirk that is both alluring and enigmatic. Although her rhymes and singing voice are what makes her shine as an artist, the apex of Lizzo’s talent is her high measure of gratitude and self-awareness. Lizzo says about breaking stereotypes, “They (Critics) try making being a Black woman hard. It’s not and I’m not gonna be one of those people that succumb to that. Being a big girl too, I had to learn to not give a shit about any of that stuff a long time ago or I was gonna be struggling. I’m just being me.” The Houston-bred artist’s definition of “being me” is comparable to Kelis in her 1999 release of Kaleidoscope – unashamed, concise chaos. Through her debut album, LIZZOBANGERS (out now via Totally Gross National Product), Lizzo unapologetically addresses gender roles, the significance of inner beauty, and female empowerment. Her dynamic artistry even caught the eye of world-renowned artist, Prince. Lizzo along with her bandmates from The Chalice, Claire de Lune and Sophia Eris, are featured on “BOYTROUBLE” off of Prince/3RDEYEGIRL’s new album, PLECTRUMELECTRUM.

Here, Life + Times premieres Lizzo’s “Paris” music video taken from her LIZZOBANGERS album. “That video is off the chain. (Writer’s note: Spoken like a true Houstonian.) I wrote the song before I’d ever been,” Lizzo says about the “Paris” video. “When I was in school studying the flute, I was supposed to continue and go to the Paris Conservatory and study flute there. I abandoned my flute dreams.” Amused by her own mention of “flute dreams,” Lizzo bursts into laughter and repeats the statement to herself. She continues, “I started pursuing music actually. I was like, ‘I’m gonna be a singer.’ I decided when I was like 19 I’m just gonna become a singer. I always had this fantasy about Paris. So, I wrote this song before I ever been. Maybe a year later, Har Mar Superstar brought us out to Europe for, like, my first tour ever for LIZZOBANGERS. We stopped in Paris and shot the video. You’re experiencing my first time in Paris in the video.” Along with the exclusive video premiere for “Paris,” this is a snapshot of the conversation we had with Lizzo post studio session.

Life + Times: You were featured on Prince’s album. I also just saw your picture with Grimes on Instagram. So, can you actually talk about that yet or no?
Lizzo: Definitely. Claire (Grimes) is a really, really, really cool chick. She and I been kind of talking back-and-forth on the Internet for a while about collaborating. Finally I just happened to be in LA. I was like, ‘I’m in LA. You in LA?’ She was like “yeah” and we met up and talked. She’s really, really cool. She’s inspired me to take a lot of initiative in production and recording and we enjoyed making things together. So, hopefully everyone will hear what we got. (Laughs)

L+T: Oh man! I am so excited. I’m a fan of both you and her, so the thought of you both collaborating is insane.
Lizzo: (Laughs) Yeah, she’s extraordinarily talented and super cool. She’s doing all of her own stuff like engineering, producing, [and] writing. It’s really cool to see.

L+T: It’s not too many of her types left that self-produce and solely create all of their content. She doesn’t rely on others to produce for her.
Lizzo: Right. I don’t even want to say she’s one of the last ones left. I think she’s one of the pioneers and one of the firsts. I think there’s more and more and more coming. It’s really, really cool. Even me, I’m taking the initiative…in the hotel room now, I’m like ‘I gotta get this. I gotta learn!’ So yeah, I think it’s just the beginning.

L+T: Yeah, you’re right. You brought out an interesting point to the Boston Globe. You said, “The male versus female thing never occurred to me because I’m not a sex symbol.” In hip hop it always goes back to a passive or a surprised in tone, “She’s a great female rapper.” What helps you to not become sidetracked or clouded by the perspectives of what people may expect of you as a female rapper?
Lizzo: From the hip hop side of the industry, it becomes way more apparent. I will sit up and be in an interview and they’ll be like, “And this female is like a bad female emcee. She is such a good female rapper.” I’m like, ‘Dude, stop saying my gender.’ Also, I’m an indie artist. I tour with indie bands. I’m signed with an indie label in America. My music reaches people on an indie level. So all of those people aren’t going to be like, “Listen to this female rapper.” They’re like, “Listen to Lizzo” or “Listen to this Midwest rapper from Houston” maybe or “weird rapper” because I haven’t crossed into the mainstream side of the industry and for a long time, I haven’t been. For my next record, I think that’s probably what we’re gearing up to. Everything before then, I’ve been in a very safe space where indie minds are around me, so there’s no level of expectations I get from people. I’m not put into some type of box because nobody’s in a box in the indie world because everybody’s in the indie box. 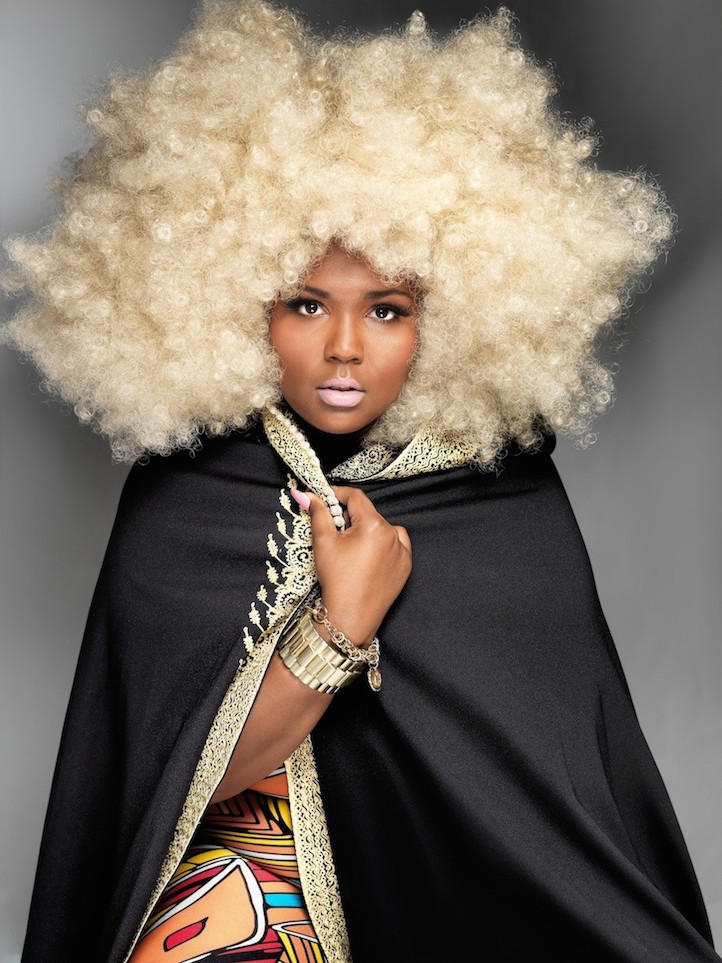 L+T: That’s true! You brought out “mainstream” and in a sense it’s not intentional. “Mainstream” has such a negative connotation – like you’re a sellout. Good music is good music.
Lizzo: Right. Oh yeah! Honestly, I love pop music. I just was writing pop music last week. (Laughs) All forms of music if you’re expressive are beautiful and I don’t knock it. I see mainstream as just a type of success; like do you want a mainstream success? Do you want to create the kind of music that will get you into the mainstream crowd anywhere featured in Top 40 radio and featured on mainstream blogs? That’s just another side of it. You’re just catapulted into a mainstream platform and everyone sees you. If that’s not what you want, stay indie. It’s not hard to do.

L+T: Well, you have definitely crossed over that threshold. Hey, you were on Letterman! How was that?
Lizzo: That was insane. Every time I pass by a TV screen and I see Letterman, I just want to hug him. It was very surreal. I was so nervous at first and then I was washed over with a complete, ‘Am I supposed to be here?’ I don’t think I’ll ever forget it. My whole family was there. It was just such a cool moment to feel like we’ve achieved something, like a lifelong goal. It was just like a next stop, especially because it’s (Letterman) ending this year. I don’t think he’s doing it next year. So, it’s kind of like being a part of history.

L+T: Correct me if I’m wrong, but this was your first TV appearance – right?
Lizzo: Yes.

L+T: Your first TV appearance is Letterman! Plus, it’s his last year. Well, congrats!
Lizzo: Thank you. You know, I’m taking everything as it comes. I feel like ever since I’ve become a solo artist – I’ve always written and been in bands – things have been handed to me kind of too big to chew. I moved to Minnesota and maybe within six to seven months I was asked to play First Avenue main stage sold out – not solo, but they were like, “Come up and do this song.” It was like the first solo song I ever made, you know. They were like, “Get up and do this song!” I was like, ‘Oh, okay.’ (Laughs) Everything’s been given to me so big that I almost can’t chew it all – ‘big grrrl small world.’ Luckily, I’ve got a crazy appetite. (Laughs)

L+T: I love it! (Laughs) Now for the question I’ve been dying to ask you. How did the “BOYTROUBLE” collab with Prince come about? How did you both get in touch?
Lizzo: Oh, Prince. (Pause) It still blows my mind because I go through and I’ll be working in the studio with so-and-so, kicking it with so-and-so, who are all kind of in the industry and drop Prince stories out of like awe and almost reverence. From London to LA to New York, Prince is still this global man of mystery – this artist to be revered, you know. A legend, you know what I’m saying? Every time I think about it, I just sit back and listen like, ‘Oh my god. I’ve had the pleasure basically.” I feel like I’m in a very small percentage of the population. (Laughs)

L+T: Because you are!
Lizzo: It happened so effortlessly and so randomly. Like I said, everything was given to me too big I couldn’t chew. I remember when I first moved to Minneapolis, I started with my best friend Sophia Eris an R&B hip hop group called The Chalice. We were a trio and I remember we had made like a quick record. We made a quick little record. We had a quick little release show and ended up on this Minnesota music documentary. So they filmed us…and then Prince obviously, and some other really amazing artists. I guess he saw it. (Laughs) This was all within a year of moving to Minneapolis. He just like emailed us one day and was like, “Can you guys come to Paisley Park [Studios] and record?” We were like, ‘What?’

On Easter Sunday – it was very religious (laughs) – we all did a pilgrimage to Paisley Park and did it. It was so effortless. There was not a controlling mind or finger in the room. It was like treat this as if it were your song and I respect that so much because this man could easily create. He probably creates pop songs in his sleep. He probably creates songs while he’s brushing his teeth; intricate ballads while he’s in the shower. He can just ride around all day with 12 new songs that no one will ever hear and they’re the greatest songs of all time and he let us do it. I felt like it was out of respect. He just has such a respect for independent female artists. I will never ever forget that. It’s one of the things that changed my life.