For KNOX, consisting of siblings Nic and Eliza Coolidge, their kinship coupled with their well-rounded musical background and ingenuity has worked in their favor. Since their formation as a band in 2011, the duo released three EPs and is now a unique addition to Boysnoize Records. With consistency as their canvas and versatility as their key tool, KNOX fuses together everything that’s “right” with indie bands while intertwining human feeling into the many layers of electronic music.

Here, Life+Times speaks with KNOX and unveils the official music video for “Redline.” The video is the perfect intro (or re-intro) to the duo – jazzy vocals and downtempo electronica amid a visually dark, yet delicate dreamscape. “Redline” is featured on the duo’s third EP, Thieving of Well, due out today on digital and vinyl via Boysnoize Records.

Life+Times: In a past interview I read, you mentioned that when it comes to creating music, you try to “emit what feels natural.” For your creative process in general, what are some of the catalysts of your ideas as to what to include in a record?
Eliza Coolidge: I think a lot of our work is impromptu. Nic and I will hole up in a studio for a couple of hours at a time, trying out new pieces of equipment, recording for hours and hours just getting ideas out – kind of, like, whatever comes subconsciously [and] gathering all that. Then, we individually go back develop the material, talk about the things we like about it, rework it…
Nic Coolidge: It’s just very rare that we – at least for me, I can’t speak for my sister – sit down and be like, ‘Okay, I have an idea and this is what it’s going to be,” like, something planned out in our head. A lot of people, artists, musicians, producers will do that – already have these ideas already kind of sketched out in their heads. That kind of happens to an extent for us, but I think most of the stuff that we’ve been proud of that’s come out is…something through trial and error and just expand from there.
EC: Nic will come over to the studio and will just put me in front of stems and drum machines, something that I’ve never tried before and just kind of let me go loose. (Laugh)

L+T: So, it’s more of an organic experience for you guys, not so much a “Let’s sit here and think of an idea” scenario. In regards to being signed to Boysnoize Records, how did that come about?
NC: (Laughs) Okay, here’s the long story to that – The Boysnoize [Records] label manager we had been in touch with for some time now actually, like over two years, he had heard our music – some of our demos, some of our earlier releases – and took a liking to us. We shared some emails back-and-forth. He had worked for a previous label at the time and tried to bring us onboard. We kept in touch. Then, he ended up going to Boysnoize [Records] and introducing us to Boys Noize, to Alex, and then it just kind of went from there.
EC: He seemed pretty into the idea of having a more downtempo, moody electronic act to the label. 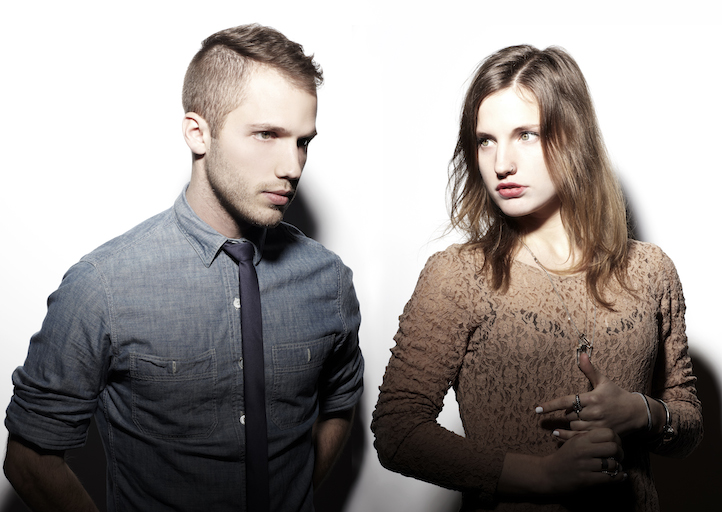 L+T: It’s definitely something different! His roster his full of straight-up DJ-producers in techno, electro, and so forth, then there’s you.
(Eliza and Nic laugh)

L+T: The exception. I noticed with the Here EP and To Rush, Roar, And Murmur – I listened to both of those releases – not only do you believe in the power of MIDI controllers and different electronic elements into your music, but there’s also organic instrumentation with guitars. I think that’s cool and definitely sets you apart. When it comes to composing music and particularly when you’re performing live, what challenges do you encounter by fusing those two types of instruments together?
NC: I think the biggest challenge is figuring out how we’re going to do – or who’s going to do what. It involves a lot of live looping

EC: For both Nic and I, we both came from performing backgrounds. Nic’s been playing guitar since he was a little kid and I was always in musical theater, then moved on to go to jazz school. We’re both really comfortable singing, playing guitars and instruments.

L+T: Everything starts in childhood background when it comes to music development and intro. You brought out that you both come from a musical background, what were some of the different artists that you both listened to growing up?
NC: There was aloooot of Stevie Wonder in the house. A lot of Beatles as well, I remember. Our parents had very eclectic tastes in music. Beyond that as well a lot of old folk and blues.
EC: And jazz.
NC: Definitely. There was a lot of jazz in the house growing up as well. We remember our parents playing music quite frequently – putting on records and CDs when we’re at dinnertime, like, at night.
EC: For me, one that I think when we started to really notice electronic sounds, I remember the first time I ever heard it. It was when my cousin came over and gave us Post, Björk’s album.

L+T: What led to your decision to form a band together? Was there a certain experience or “aha!” moment?
EC: Yeah. Nic and I lived together in New York for a while. We were there for a couple of years. It just got to a point, where we were both working on different music, but in the same apartment – both through speakers and really thin walls. It kind of became this, ‘I can’t really get my stuff done. You can’t really get your stuff done. Why don’t we just start working together?’ (Laughs)
NC: I believe we finished one song back then – this was some time ago probably six years ago before we actually started the band, we finished some demos. We finished one song that we were happy about at the time. We just came back to it later on and when we formed and started to create the rest of our To Rush, Roar And Murmur – I think when we finished that song “Fool of Fools,” we kind of had that “aha!” moment, like, ‘We should be doing this. We should pursue this with everything that we have.’
EC: We had also moved back home to our parent’s house, so there wasn’t anything to do around there. (Laughs)

L+T: That’s a cool story. What’s next for you both?
NC: Well, definitely a lot of focusing on studio time. At the moment, we do have a booking agent and they are dutifully trying to find us some shows overseas. I think that will be coming in the close to near future. We’re looking forward to booking something in New York City.