In the ‘80s, Argentinian rock bands such as Soda Stereo fearlessly combined their solely Spanish lyrics on a backdrop of new wave and post punk. They were among a small group of artists that paved the way for non-English bands to garner commercial success outside the confines of their Argentine borders. Channeling that same pioneer spirit is Brooklyn based band, Buscabulla, comprised of vocalist Raquel Berrios and multitalented artist Luis Alfredo De Valle. Originally from Puerto Rico, the duo combine there Spanish speaking roots with the sounds of the Caribbean, ‘80s Argentinian rock, and electro on their debut self-titled album released via Kitsuné – quite the musical landscape. Buscabulla EP is the attractive, yet approachable person at a party. Even if you’re not a Spanish speaker, the EP’s production is non-intimidatingly beautiful and appealing.

In this exclusive Life + Times video premiere, Buscabulla and Dev Hynes (Blood Orange) discuss their unexpected partnership with each other for the band’s first-ever EP. We also catch up with Raquel ahead of last week’s CMJ Music Marathon to discuss the inner workings of Buscabulla and the twist of chance that started it all.

Life + Times: The new EP is great! You can hear all of the influences from Argentinian rock to Caribbean. Are you happy with the outcome? What creative approach were you and Luis taking with this EP?
Raquel Berrios: I kind of collect records and I used to deejay before I made music. I’m from Puerto Rico, so I collect a lot of just Latin music – mostly, like, music in Spanish. I guess I have this cornucopia of influences. I’ve always kind of wanted to collapse them. I don’t think I ever say I just wanna do an album and it’s all gonna be, like, Cuban. I always really like to say I wanna risk take and mix things that maybe don’t go together from that collection. That’s where the influence starts. 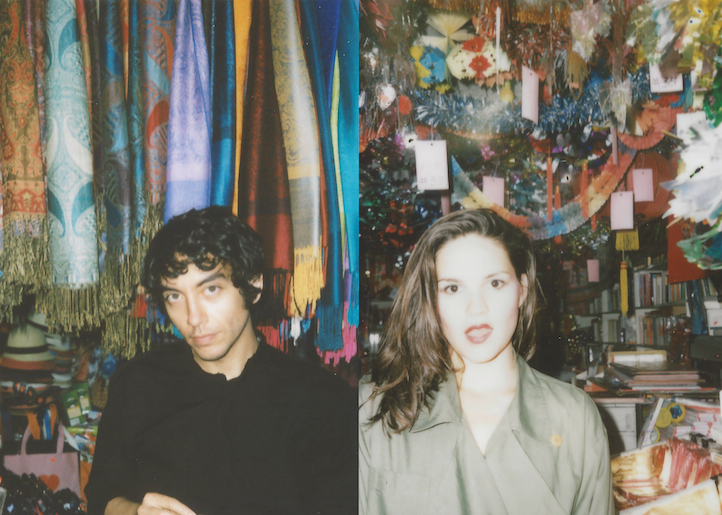 L+T: You definitely get that vibe throughout the whole release. You worked with Dev Hynes (Blood Orange). Was that for the whole release or just for the one track, “Temporal?”
RB: We worked with him for the first three tracks – “Caer,” “Métele,” and then “Temporal.” And these were kind of songs that we had demos and were kind of playing, but once we put them in front of Dev he was really good in the decision making and kind of how to achieve the sound that we wanted. He also plays guitars on “Caer.” On “Métele” he did some production – we kind of co-produced along with him. Then, “Temporal,” we had a friend of ours come in and do the drums. He kind of oversaw that. He was really good in decision making and vibes – what to add, what to not add, like he’s really good. He tends to be pretty minimalistic in kind of his ways. So yeah, it was just for the first three songs. “Sono” is a song we had actually done before and he really liked that one. We had never put it out there, so we decided to put it in the debut EP.

L+T: Oh, alright. Well, how did you even meet?
RB: (Laughs) Well, it’s kind of a funny story. The crazy thing is this all happened through a contest that happened through Converse. The crazy thing is we were super hesitant to even participate in this thing. It was more like I didn’t really want to do it. It was basically this thing that Converse did where they were offering Dev Hynes to produce an EP for an up-and-coming band, but then he would be the one choosing who he wanted to work with. So, we kind of sent our video and our stuff in and he immediately said, “These are the people I want to work with.” Of course we did the whole protocol of the contest or what have you. Then, Dev picked us and it was crazy because it was kind of a really crazy process because I don’t think that – Converse has the Rubber Tracks studio in Brooklyn – they had ever done something in that way where they had gotten a top notch producer at the time to get involved in a project like this.

It was really interesting because I never really thought he’d be interested in Buscabulla because it’s a Spanish language project. For some reason, it was kind of limiting me, but at the same time I think he really ended up liking what we were doing because he thought it was pretty exotic. So yeah, that’s what sort of ended up happening. We ended up learning that his mom is from Guyana which is in the Caribbean and that he had just been there a few months before filming…So, we just ended up finding all of these like parallels that existed between us and that kind of really helped in understanding the language as we were doing the music. That’s how it happened. It was very like fate. It was very strange the way that it happened, but at the same time I think that the best things happen that way.

L+T: Well, it helps that Dev already had an appreciation for the style of music you and Luis create. Also as you alluded to, timing plays such a major role with these kind of projects, who you meet, and so forth. That’s awesome. To your point, you brought out that you were surprised Dev was wanting to work on a Spanish-speaking project. I was actually thinking the same thing. I did some digging on the origins of Argentinian rock though, salsa dura, and music influenced by those sounds. The Spanish-speaking artists that created that music were among the first to be commercially successful outside of South America.
RB: Exactly!

L+T: So what you guys are doing is very different. Outside of M.I.A., but she speaks English in her tracks. Plus, its’ not even the same countries involved. However, the parallel I’m drawing is that you both play with musical layers outside-of-the-box. I commend you. The EP is out on Kitsuné. I know you’re a designer, so did those fashion and art ties play a role in signing to that label?
RB: No, not really at all because I’m a textile designer, but I’m not a fashion textile designer. I design textiles for interiors. I’m more in front of the interiors and architecture kind of market. My background is in architecture. Although I’ve always been fascinated by fashion, I think I have my own style mostly created with thrift store finds.

Once the album was done, we made some connections through it and we just sent it out. The Kitsuné people immediately wanted to pick it up and put it out there. I don’t know if the fact that they’re European, they’ve been even more open to it from the sense that it’s Spanish or what they saw in it. But they felt that the sound really could transcend any sort of language barrier. I think they have an appreciation and I think that maybe they view it as something exotic. Yeah, they were excited for the whole thing. We were like, “Oh!” We love this combination of things, you know. We’re from Puerto Rico, Dev is from the UK with Caribbean roots, and then picked up by a Parisian label – we kind of love the whole mixture of things that are going on here. (Laughs)