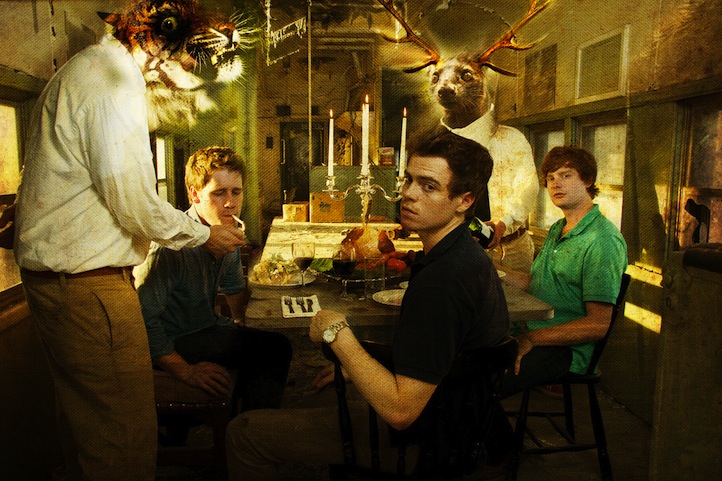 Trying to figure out what genre Mansions on the Moon should fit in is somewhat of a headscratcher. The trio of Ben Hazelgrove, Lane Shaw and Ted Wendler bring a wide spectrum of influences ranging from electronic bass and acoustic to soul and R&B to their sound. Last year’s Diplo and DJ Benzi hosted mixtape Paradise Falls encapsulated their genre clashing sound and helped them land a managing deal with another fellow who knows a thing or two about blending musical fields – Shae Haley of N*E*R*D. With the band raking in new fans of all colors and gender, the guys sat down with L+T to discuss their upcoming EP, how they honed their sound and what exactly is, a Mansion on the Moon.

L+T: What was the sound of your previous group as opposed to what you are doing now?
Ben: It was very much like improvised electronic bass and jazz influenced instrumental music. It was definitely a fun time for people who wanted to dance. Mansions on the Moon also has that dynamic but there are also lyrics. I wouldn’t want to compare them but both were pretty cool.

L+T: Ted, can you talk about your musical background?
Ted: I came from a different world where I was living in Montana playing the guitar and the banjo. I was doing more singer/songwriter stuff. I was writing songs for myself and Ben was too. It sort of organically happened where we started writing together and married the two different styles.
Ben: We didn’t plan this at all.
Lane: I think by merging those sounds we started showing a lot more of our colors than expected. The music we grew up on mixed with the music we listen to now is how we came up with our sound. It’s a culmination of the music today and the music that our parents made us listen to on road trips.

L+T: Everyone tries to put music in a box but Mansions on the Moon is completely out of the box.
Ted: I think it would be easier if we would stick to one genre so when people ask what kind of music we make it would be easier to answer the question. But it definitely makes it interesting and we don’t get bored with it. I personally don’t want to write the same music every time. We have electronic elements but then we’ll have a purely acoustic track. But I think the thing with our style is that you can tell that its Mansions on the Moon no matter what instrumentation. That’s what defines our sound, the use of melody and harmony.

L+T: Why the name Mansions on the Moon?
Ted: Actually, we had a ton of different names before we chose Mansions on the Moon. When we were working in Atlanta our original name was Avatar believe it or not. It was before the movie had released so we thought it was a really awesome name and then the movie came out and we had to change it.
Lane: We’d tell people our name and they would respond “That James Cameron movie? The new Titanic?”
Ted: We were living in Virgina Beach in this cool beach house. We were having a party and there were some hazy clouds over the moon and it created this cool rainbow around it. You could see the face on the moon clearly. I was thinking man on the moon but then I thought that Mansions on the Moon was a cool alliteration. Since then we’ve compared it to this lofty dream we have of doing what we love, being successful at it and making it in the music industry.

L+T: You mention that it’s a lofty dream but its slowly coming to reality. How did the connection with N*E*R*D’s Shae Haley happen and what have you guys learned from him?
Ben: Shae was connected to us through Illusive Media who did the “She Makes Me Feel” video. Shae called us when we were living in Colorado and said that it would be really awesome if we could work with him. He said some nice things about our music and we made the trip to meet him and he became our manager. Shae is awesome because he’s gone through being in the mainstream indie world.
Ted: He has a really calming presence and you can just tell that he’s been through it before. He usually has a good answer to our questions. He has an ability to make everything seem doable
Lane: He’s definitely the Zen Master.

L+T: Genre clashing can turn out to be a catastrophe but in your case it has worked to a ‘T.
Ted: The creative process being different is the reason why each song has a unique sound. We don’t usually sit down and say that we have to make a certain type of record. It sort of happens. Whatever we are inspired about that day we put it down and record. It’s really a free form writing style which contributes to the uniqueness and non-specific genre that we find ourselves in.

L+T: The Lightyears EP is around the corner, will it be the same vibe as Paradise Falls?
Ted: People are going to hear the same elements they heard on “Paradise Falls.” You’ll know its Mansions on the Moon. We’ve had these songs for 2-3 years and have gone from studio to studio and city to city taking these songs with us. We’re getting different engineers and instrumentation so it’s really been an evolutionary process with these songs. I think we’re all really proud of what we did. We’ve heard these songs so many times and we’re just excited to let other people hear them.
Lane: Yeah buddy!