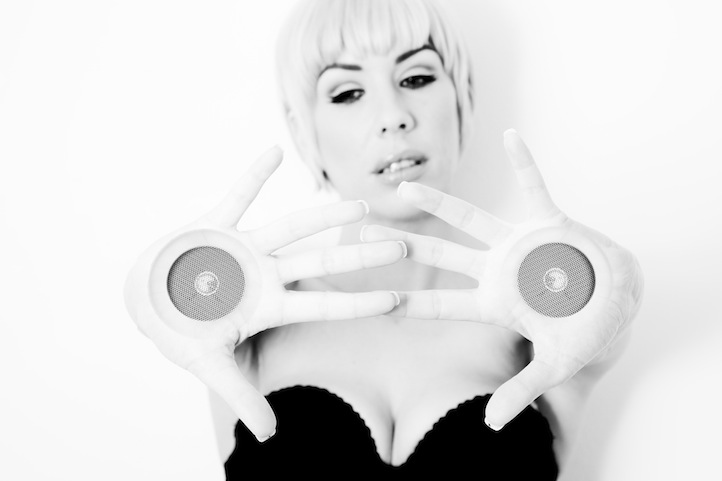 Jenny-Bea Englishman is one of those enigmas in music that her fans have long wanted the world to embrace. Perhaps too far ahead of the curve for her own good, the artist known as Esthero delivered an electro-soul sound to life in 1998 with Breath From Another well before it was utilized and made popular by today’s R&B artists. But the Canadian doesn’t sweat it, instead she has dropped her third album in 14 years, Everything Is Expensive, with a much more adult contemporary vibe; perhaps subconsciously thumbing her nose at the industry’s definition of what’s hot. In an exclusive sit down with Life+Times, Esthero discusses why her new album moves in a different direction than her previous work, needing a musical revolution, working with Kanye West, and why he is the reason this album was created in the first place.

Life+Times: Why does it take you seven years to release an album?
Esthero: Because I don’t force it. It either comes quickly or it doesn’t. I was never a fan of working really hard at it. If I have to work that hard on a song, it probably isn’t as special. When I hear people talk about, how many songs did you have for this album, I answer “Well, how many songs are on the album? That’s how many songs I have.” I always hear about people that have 40 songs and whittle it down to 12 tracks and I’m like “Oh my god I’ve never done that.” If there’s twelve songs on the album that’s how many songs that were good enough to complete. If something is not dope, I don’t bother finishing it. I’ve never been a quick writer for myself.

L+T: The irony of Everything is Expensive is the fact that you’ve left behind a sound that you were way ahead of the curve on while everyone is using it to make money today. Was that a conscious thing?
Esthero: I was just doing what came naturally. I don’t really premeditate any of that stuff. I didn’t try to style this album or worry about what people might think. I was more excited when I finished “Go” because I’ve never done anything like it before. Then I thought, nobody has ever heard me sing like this. I’m not really a balladeer. So it was kind of exciting to be discovering and revealing new sides of myself.

L+T: You showcased a new side of yourself, does the title have anything to do with your change in direction?
Esthero: I think so because this album is so naked and I’m going back to my folk roots. It’s sort of like the small town girl in me. I actually offered the title song to Kanye West.

L+T: Wait, the title track was for Kanye West?
Estero: Well, I started writing the song for myself years ago…had most of the parts, but not fully arranged yet. Just a raw demo with vocal and guitar to get the idea out. I saw how raw Kanye was getting on 808s & Heartbreak and it was really emotional. Given his new direction, I felt compelled to give him that song…. especially because of the lyric “And if I dole out my good name, would you give me the correct change?” – I thought he could relate to that, to everyone wanting a piece of you, and the inevitable price of notoriety. There is a melancholy strength in the song. I gave him this shitty little demo and told him that maybe there was something in there that would inspire him. He hit me back and said that it was great but just didn’t fit what he was doing. I’m so grateful that he said no though. It would have been amazing if he could have done something with it but the fact that he didn’t is the reason why I recorded what you have today.

L+T: How did you and Kanye West begin working together?
Esthero: I met him at John Legend’s 28th birthday party. I basically stalked John after “Ordinary People” came out. I wrote John a 500 word essay on why “Ordinary People” was one of the best songs I had ever heard in my life, and he and I became friends. As far as working together, John Legend was finishing the 2nd album in LA. He told me he was going to be at a studio to play the new album for Kanye and I should come by. I dropped by, and we hung out while listening to John’s stuff. Kanye had this picture up on his laptop that was really beautiful. I asked about it and he told me it was his set for the Glow In The Dark tour. He was so stoked about it, so inspired, telling me about the concept – one being that he was going to have a spaceship named J.A.N.E., and that he would be having a direct dialogue with her on stage. He described the entire show in great detail…he’s pretty brilliant, especially conceptually, and super detail oriented. I asked him who was doing the voice of the spaceship and he was like “Uhhhh…I don’t know.” Mind you, the tour was starting in two weeks and it’s the one single detail he hadn’t considered yet. So I think it was meant to be. I told him I did voice work and he said “Esthero as the voice of the spaceship, that would be dope.” Right before I left I played him “Never Gonna Let you Go” and he loved it. A short while later I got a phone call from him while I was in Vancouver asking if I could come back to LA to do the voice of the spaceship. We knocked it out and I had a blast. I swung by the studio another day to say hello, and he put a pad of paper and a pen in my hand while he was in the middle of writing “Love Lockdown” so I kind of lucked out. He was talking about going to Hawaii and I made a comment that I wanted to go so he invited me. I went out there and worked on 808’s & Heartbreak for a week. It was awesome. I love watching him work.

L+T: Okay, back to the album, one of the most talked about songs is the breakup song “You Don’t Get A Song.” How personal was that song to you?
Estero: That’s a true story. I love taking a real emotion and sprinkling fantasy on it to magnify it, but that song is 100% life narration. I fell for someone who turned out to be a drug addict, it broke my heart and that’s the song. I fought making that song every step of the way. The experience had devastated me at the time, and I felt pretty broken. I had friends telling me to “Just write a song about it” but I was like “Hell No! He doesn’t get that. He got the girl, he got the best parts of me, he doesn’t get to hear his favorite singer lament about how he broke her heart. My artistry, the power I get from creating, that’s MINE. That’s what I have left, he can’t have that too. Fuck that.” I remember yelling at God “Haven’t we been here before?! I wrote this damn song already! It’s called “Beautiful Lie,” what do you want from me? If my job is to experience this kind of pain and turn it around into something beautiful so other people can feel less alone then I think I’ve done my job already.” But if you don’t think that God has a sense of humor then you are not paying attention. I hung up my friend who suggested it and I started angrily mumbling what would become the lyrics to myself and wouldn’t you know it came into my head perfect with a damn melody attached. I was like “fuck me!” I told my roommate that I needed to borrow her piano and basically barfed that song out in 20min. After I wrote “You Don’t Get A Song,” I looked up to God and said “My bad”. I guess I had something more to say after all.

L+T: Do you hold the same mentality you had when you released “We R in Need of A Musical Revolution” seven years ago considering you were slamming what the mainstream upheld?
Estero: When you get older you want to shine light on what’s beautiful unless you are willing to offer a solution for what’s wrong. “Revolution” was perfect for the time it came out because I was offering a solution. I wasn’t just complaining, I offered alternatives. If I’m going to get angry about something it will be about standing up for those who can’t stand up for themselves. Does the revolution still need to happen? Absolutely. It will happen naturally and I just have to do my part. I think that when change is happening, the artists feel it first and voice it for/to the people. The people feel it too but the artists have to poetry, the language to make it all click. The artists are the voice for the people. When you see groups like Mumford & Sons, and people like Adele and Gotye sneaking into pop radio, that’s a good sign.

L+T: When you look back on your career and you hear people say that you should have been more successful, what are your thoughts?
Estero: If I was successful then I probably wouldn’t be people’s favorite artist anymore. I don’t know if there’s any blame to be assigned. Even though, as you said, people appropriated what I did early in my career and made it successful today, I’m not mad about that. I always look at it in awe. When someone can take what I did, boil it down to a finite moment and turn it into something that it appeals to the masses, that’s awesome. The only person who hasn’t figured out how to do that, is me! It’s ironic and funny but the reality