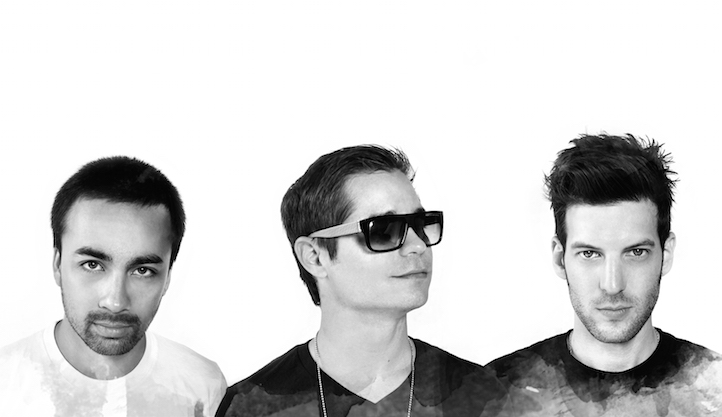 Dim Mak Stage at Electric Zoo 2012 hosted a full roster of artists, but one particular electronic act hailing from Paris especially enthralled the audience. The multi-talented band known as Dirtyphonics were among the few performers that translated “DJ set” into an all-out live bass production drizzled with alt rock. Though the band has evolved – Thomas Desbouvrie departed from the band in 2014 to pursue his art career – their proclivity for a wide range of music remains a motivation behind their production style. Thus, it is of no shock that Charly, Pitchin, and Pho of Dirtyphonics feature bass music, dubstep, drum n’ bass, and the fusion of trap beats with the rhymes of Trinidad James on their newest Write Your Future EP – out tomorrow via Dim Mak. The opening “Power Now” track encompasses the trio’s hybrid, genre-less music. The song has a guitar intro and outro reminiscent to ’91 Metallica (one of DP’s inspirations) before breaking out into a dubstep-DnB woven track with punk drums.

Another notable feature of Write Your Future is the band’s introduction of their first-ever trap song, “Hustle Hard,” in partnership with DJ-producer ƱZ and rapper Trinidad James. The trio originally met ƱZ in LA before arriving in DP’s studio in Paris where the song was finalized. “We’ve been friends for a little while now. We make quite different kind of music even though it’s within the same bass community. He’s very much trap. We’re known for drum n’ bass and dubstep. So, it was great to incorporate his vibe with our vibe on the same song,” Charly says. Although the track was complete, both parties felt like a puzzle piece was missing. Pitchin adds, “He’s (ƱZ) really minimal and we’re 100 percent maximal, you know what I mean. After we got in the studio that track was pretty much done and we were looking for vocal samples. After the session, we were like let’s look for a real hip hop artist.” Hence, that “real” factor came in the form of Trinidad James who Pitchin says “loved the track” and was open to a collaboration.

The EP also features collabs with fellow DJ-producer, 12th Planet, vocalist Matt Rose, and Julie Hardy of Clementine and the Galaxy. “We’re just an electronic music band. We don’t want to be put in, like, one category. Sometimes it takes people time to understand that,” states Pitchin. He’s right. Dirtyphonics have turned a concoction of diversified melodies and rhythm into a kaleidoscope of art without a definitive classification.

Life + Times: What stands out the most on this EP is that you implemented so many genres. A couple of years ago in 2013, you dropped your debut album, Irreverence. What was fun about putting this EP together versus the album?
Charly: On this EP we worked a lot with vocalists which is something that we haven’t done much in the past. Basically everything we’ve done before this EP, including Irreverence, was mostly instrumental. We’d been doing a lot of remix work before that and that’s when we started playing with vocals. We kind of, like, got the taste for it and obviously on the album you have a couple of vocals. So, it wasn’t like a mixed vocal of the album. So, for this one we kind of like did this as a starting point of including a more….storytelling element kind of from the lyrics obviously. That was kind of like a challenge for us because as I said we haven’t done that much in the past. It was all a quite nice angle to take when we started writing music knowing there would be vocals added to the music later on.
Pitchin: The second thing is we wanted to change the format. We wanted to do a full-length album, but now after seeing – well, maybe the kids are different now as far as like music I mean – but maybe the EP is more efficient. When we released the album we felt that some tracks were just lost. People only focused on four tracks out of ten. You still have really nice, really good tracks [that] works really well on every dance floor anywhere in the world, but the focus was just so much on four tracks. So we were like, ‘Alright, maybe we just think about this and try to go back to the EP format and we’ll see how it goes.’

L+T: It’s interesting that you observed that because that really is the case regarding the audience’s attention span. It’s so much shorter than in the past. The audience does just focus on four to five tracks – maybe even six tops. Otherwise, the balance of tracks get lost in translation. You can save it for the next EP.
C: Yeah, that’s kind of why we did it. (Laughs)
P: It’s a totally A.D.D. generation.

L+T: It’s true. “Power Now,” the single you dropped first, is stunning – the punk drums, the drum n’ bass, everything! I know the band mostly comes from a hard rock background. Tell me about how that track was composed.
C: On our other album, Irreverence, we did a track called “Walk In The Fire” which was the first introduction to our metal roots in the electronic environment. When we wrote it, it was something we really wanted to do – bring our influences from the past and put it in the music we make now. To be honest, when we wrote it we weren’t sure how the crowd would react to it. The amount of love and positive comments that we got from it pushed us to say like, ‘Hey, let’s get pushing in this direction and do another one – if you want to call it – like that.’ Once again the starting point was taking the guitars, laying down some heavy riffs, and adding the whole electronic environment around it.

L+T: Excuse me if this is a ridiculous question, but the ending guitar solo riffs – was someone actually playing that or was it an effect?
P: No, Pho is playing it.
C: Yeah, every single guitar gets played.

L+T: Wow. Nowadays there’s an effect or plug-in for just about every sound. It’s refreshing to hear something organic within a dance music track. So, that’s great!
C: Yeah, that was important for us because there’s a bunch of electronic producers that don’t necessarily have an instrument playing background. It’s important for us that everything that’s straight up instrument would be played and not programmed on a computer.
P: It’s actually just a lot of fun. I’m not the one playing the guitar, because I was a bass guitar player back in the day. Just the fact that you come back on a real instrument and put the synthesizer and computer away…yeah, it was just so much fun.
C: And because we’re a band, there’s three of us sitting down at the computer and we talk about what we want to do and go one-by-one behind the computer…but having this feeling of sitting down with the guitar on your [hands] and having to click in your headphones, jamming and rocking to the beats that we lay down is a different way to record and make music. It was great to incorporate both vibes into one single track.

L+T: You definitely can feel that in the track. I always wonder why producers as a whole collaborate more with rappers or pop artists, but you hardly hear that hard rock element in dance music. I saw you guys at Electric Zoo years ago. In the live show you included a considerable amount of rock tracks. So to hear “Power Now” and hear that you included actual guitars, is something that’s going to bring about an evolution within dance music. You can combine dance music and hard rock – it works. Thanks for proving that.
P: I totally agree with that.
C: You can expect more of that from us in the future.

L+T: Good! Don’t change that. For my last question, I ask this to every DJ-producer, so you’re no exception. You are classically trained artists, so this should be fun. Do you think a DJ is a musician?
P: Yeah, 100 percent. After saying this, it really depends. Wow. That’s gonna be a long one.
C: (Laughs) Okay, I have a very short answer. He can give a long answer. A DJ is as much of a musician as a guitar player on stage.
P: Which would mean that a DJ without a guitar player is nothing?
C: No, no, no! Long answer could be that deejays are producers as well. We’re not talking about that. We’re talking about being a DJ you have a musical instrument that you play with and that you can create stuff with just as much as a guitar player on stage. Okay?
P: The only thing is, like, deejaying is an art. It’s like putting tracks together the way you want it. You want to scratch, you want to mix tracks, you want to do crazy stuff…get a second track and put them together and take people on a trip and get creative with the combination of the two tracks to make something different, something new. It’s awesome, but I really feel like today this part is lost sometimes. So, talking about 2015 if a DJ is really a musician depends on what DJ we’re talking about to be honest. If you take people on a journey with your music that’s one thing, but I don’t feel like you create something with the combination of tracks.
C: We also feel like some of the DJs that play today are playing playbacks. They’re not really taking any risks or having the skill to do what they do; but there are some awesome DJs out there. I don’t know if you saw the video that [DJ] Craze put out recently, so I think that’s the perfect answer to your question.
P: It’s a tough question. It really depends on who’s doing what, what way.
C: If you use the turntables to create something new and you do something different, yes. If you’re just pressing ‘play’ one track after another track, not even at the same key, you’re a fucking jukebox.

Dirtyphonics kick off their Write Your Future tour on Wednesday February 18, 2015. Click here for tickets.