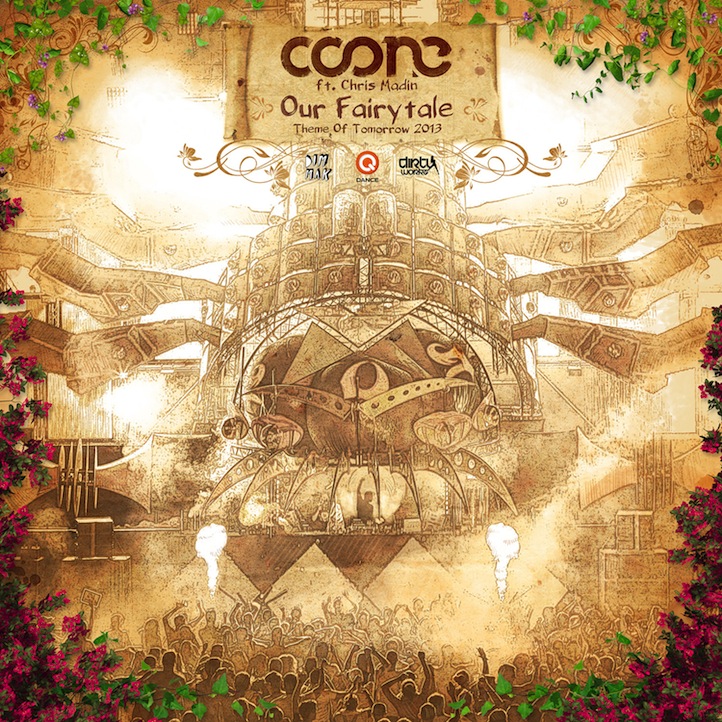 Hardstyle is to dance music, what the punk rock subgenre is to rock music. It’s the rebel your mom didn’t want you to date, but the one that captivated you the most. Clocking in at 150 beats-per-minute (BPM) or higher, hardstyle is made up of incongruent kick drums, melodic synth harmonies, and infectious vocals. Belgian DJ-producer-Dirty Workz label head, Coone, simply defines hardstyle as “a vibe, an atmosphere, [and] a lifestyle.” On October 5th, the hardstyle trendsetter is one of the headliners of The Sound of Q-dance at The Shrine in LA. His new album, Global Dedication, is out November 12th on Steve Aoki’s Dim Mak label. Coone’s new single, “Our Fairytale (Theme Of Tomorrow 2013)” featuring Chris Madin, captures the free spirited vibe that envelops the hardstyle culture. The track will be the theme of the Q-dance video content for their hardstyle stage at this year’s first-ever TomorrowWorld. Dim Mak remains seven steps ahead of dance music’s trends – there’s a reason Coone caught Aoki’s attention. As evident in countries such as Netherlands, Belgium, or Germany, hardstyle is more than a genre – it’s a movement. Life + Times spoke to Coone post-Mysteryland performance in the birthplace of hardstyle: Netherlands.

Life + Times: You recently released a single with Lil’ Jon, Dimitri Vegas, and Like Mike – it was really a collaborative effort. How was that experience?
Coone: Dimi and Mike are Belgian. So, we became friends when we saw each other at some parties, at some festivals. Of course when you’re from the same country, you start bonding very quickly. We both said, “Okay, we’re both doing internationally pretty good. So why not make a track together?” It’s not a collab that you expected because they play house and I play hardstyle, but that’s what made it interesting. We tried to make something in between hardstyle and house – something that no one did before. Then we came with those smashing hardstyle kicks, but still a little more house-y style melodies. It turned out pretty good. So we made something very global for some reason. It turned out great.

L+T: I agree. The sounds work well together. Most DJs I talk to – they’re inspired by other genres, not necessarily dance music. Is that the case with you? Growing up, what type of music did you listen to?
Coone: I listened to hip hop a lot actually – not R&B, not the Usher kind – but more the gangster, raw hip hop kind of things. They used to sample a lot of hip hop vocals in hardstyle back in the day when it was really small. When it was underground, they did that. That’s when I started doing a little bit of both, more hard, like, ‘yeah, fuck motherfucker’ kind of things. (Laughs) The combination with hardstyle is pretty cool because hardstyle is rough. It [has] really rough, tough vocals. It became something interesting back then. I was in Paris for Eminem and that was the first time I saw him live. All my expectations came true. He’s a really good rapper. So that’s where I get my inspiration from – from other genres – particularly for me, hip hop actually.

L+T: He did a tour with JAY Z three or four years ago, I think. It was amazing!
Coone: He’s born for this. You really see that. You cannot fool people for more than ten years. He’s on top of the music industry. It was amazing, His concert was really good.

L+T: You’ve been DJing for a while. Hardstyle is the punk rock, edgier part of the dance music world. For an American – because we are not fully exposed to it as much as Europe – how would you define it?
Coone: It’s a genre that once it hits you, you either love it or hate it. Once it hits you and you love it, you’re never gonna get rid of it. It’s a vibe, an atmosphere, a lifestyle. It’s something that gets through your bones or something. If I’m on vacation and I don’t hear hardstyle for more than two weeks, I become a sad man. I’m not funny anymore. It’s a little like drugs.

L+T: So, it’s deeply rooted into you.
Coone: Yeah. That’s what hardstyle does with me. I guess it does with a lot of people. If you’re from America and you’re gonna love hardstyle, be prepared that you’re gonna love it for more than at least five years. It’s something that gets into your veins.

L+T: It’s very contagious. You’re doing a show in October in LA, right? How do you feel about that? Mega exciting!
Coone: Yeah, [I’m] pretty excited. I just did an interview, I was saying that I did two shows already – one in Chicago, one in LA. But that last one I only played for ten minutes because the LAPD shut the whole thing down.

L+T: Really? When was this?
Coone: I don’t know, I guess it was an illegal rave. It was held in a parking lot somewhere in the suburbs. The experience was really cool. For me, that was more than five years ago. It was an experience like, ‘Fuck yeah, I’m getting booked in LA.’ It was something special for me back then. I’d like to go back now, to LA, and do it with a Q-dance show and with a big ass crowd.

L+T: Yeah, The Shrine is huge.
Coone: See, I did not know. I’m getting more hyped up for it.

L+T: I’m excited. It’s something that America’s not used to.
Coone: Yeah, but they’re ready for it.

L+T: Oh, hardstyle popularity in America will be gradual. Hardstyle is the sushi of dance music – you either love it or hate it. It will be a gradual thing, but it will catch on. After the first drop on Major Lazer’s “Original Don” – that’s as close as America has gotten to “hardstyle.” That’s not even hardstyle.
Coone: Yeah, that’s not even hardstyle. That’s more jumpstyle based, but yeah that’s the closest.

L+T: You’re the first hardstyle DJ I’ve ever asked this – do you think a DJ is a musician?
Coone: I think a DJ is an artist. From the moment Tiësto became the number one DJ in the world, they profiled him as an artist not as a DJ. I notice that when I’m playing, a lot of my fans or a lot of people that come to see my shows, they want to hear my tracks. They don’t want to hear just a DJ playing, they want to hear my tracks. So you’re not a DJ anymore, you’re an artist. I hope I’m a good DJ, but I hope I’m a better artist.