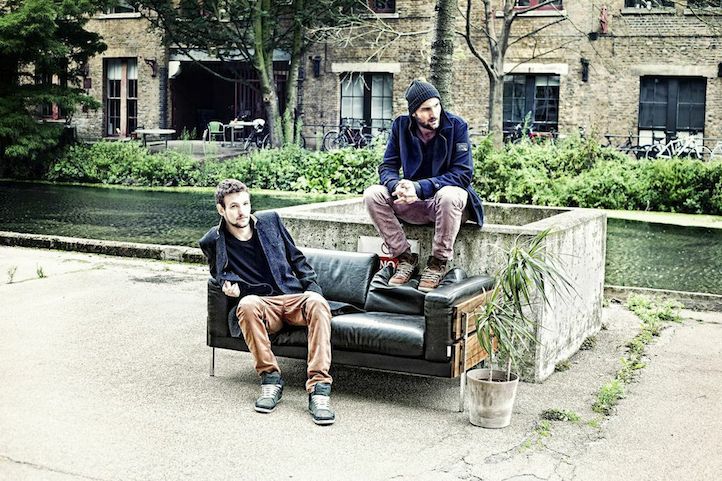 At first glance Austrian DJ-producer duo, Klangkarussell, look like just another European based electronic dance music act that produces house, techno, or anything that is relevant to beats-per-minute. Admittedly, those were my thoughts prior to viewing their intriguing live Rock am Ring performance (thanks to YouTube) that took place earlier this summer. Adrian Held and Tobias Rieser of Klangkarussell were accompanied by a drummer, keyboardist, and bassist in performing tracks from their latest Falls Like Rain EP (out now via Casablanca Records). I attribute fearlessness as the key component in what makes Klangkarussell “next” in the ever evolving dance music scene – anyone who shows up as one of the few electronic DJ acts at a rock music festival demands attention (not out of desperation, but as a result of keen creativity).

The duo recently wrapped up their first-ever North American tour and has now embarked on the European leg of their tour through the fall. Here, Adrian introduces us to the world of Klangkarussell.

Life + Times: I really like your name, Klangkarussell. I know in English that means “sound carousel.” How does that fit into the whole theme of your creative concept as a duo?
Adrian Held: I don’t know exactly. It’s just like…there’s no thought behind it to go like ‘Okay, we want the name that maybe, like, tells people what we do.’ It’s just, like, it sounded cool so we said, ‘Oh okay, that’s it.’

L+T: Oh okay. I thought there might be something philosophical about it. Ha! I know you guys both produced music separately prior to actually partnering together. How did that come about?
AH: Yeah, so we went to school together 15 years ago and then, like, we went different ways. And we met like four years ago for beer. We sat down and started to do some music together.

L+T: Oh wow. So was there a particular experience that made you realize you could work together in a partnership?
AH: Yeah, [in] the first gigs we played, [we] saw the reaction to “Sonnentanz” and it went viral on the Internet. So, we thought maybe this could work really good.

L+T: Very cool. So individually, I know you can’t speak for Tobias, but for you specifically, how were you introduced to electronic dance music?
AH: I went to a small drum n’ bass party and that was my first contact with electronic music.

L+T: Oh wow, that’s cool. Was there a particular artist that you heard at the party that started your interest or what was it?
AH: No, I think I just was with some friends and there was like this new club thing like a youth culture club thing and we just went there to check it out and we liked it.

L+T: And the rest is history. That’s cool. Being that you both bring your own level of expertise to the project, what would you say you’ve learned new from Tobias while working together?
AH: I think that’s kind of hard to say when it comes to music, like we’re very, I don’t know how to say that, but like, it just like works together really well. So, we never fight in the studio. Sometimes we don’t like stuff the other is doing, but it’s never like a bad thing. We just tell him ‘I don’t like this so much’ and the other one says ‘Okay, let’s not do that. Let’s do something else.’

L+T: For example when you guys are actually working together on different projects – I’ll use new EP (Falls Like Rain) as an example – what is the creative process? Who comes up with the ideas and how are you able to work cohesively?
AH: We live in different cities, so most of the stuff we do – we do via the Internet. So, one part of us sends something to the other guy. Then he starts on something different – maybe it’s a new version, a new arrangement, a new part and send it back and forth basically until there’s a point where we say ‘Okay, now we take it to the studio and finish it.’ Then, do all [of] the chop-up, production tweaking and stuff – and that’s basically the way we work.

L+T: I know Austria has its own dance music scene versus the rest of the world. What would you say is the most striking difference between the scene there and everywhere else?
AH: Well, it’s smaller. (Laughs) It’s like, nowadays I think it’s nearly the same everywhere, but it’s just like the dimension of it is smaller.

L+T: I figured that would be the case. And what I really appreciate about the EP is it’s not just one particular sound, I know using the example of “Sonnentanz” again, there are jazz elements to it and it’s more than just house or tech house, it’s a lot of different things. So where did you guys pull your creative inspiration from overall?
AH: I don’t know, we just do what we want to do. We can’t say like this is our inspiration or that is our inspiration; like it’s just do and do and like most of the stuff we start we throw away. It’s like we throw away 90 percent – it ends up in the trash can and the ones we really like they’re gonna be released. I can’t really say that there’s inspiration for this song.

L+T: Okay, that actually ties on my next question. In June, I’ve watched it on YouTube, you guys performed at Rock am Ring. Such an awesome performance! So was it difficult coordinating with the band and how did you meet these guys? Tell me a little bit about the experience.
AH: Like we met Will, our musical director, we met him last December, so we decided to do a live set…and then he called the bass player, the keyboardist and stuff. Then, we went in the studio and started to work on the live set and yeah.

L+T: Oh man, that’s so cool. It looked like it was a fun performance, very different. And for my last question, I end this with every DJ and producer. Do you think a DJ is a musician?
AH: Well, he can be; but it’s not, like, not necessarily.

L+T: Not necessarily?
AH: For example, if you can scratch stuff and use it as an instrument more and like put it into your records or something like this. But if you’re just deejaying, you’re not a real musician of the sort – but you can be, of course, you can.