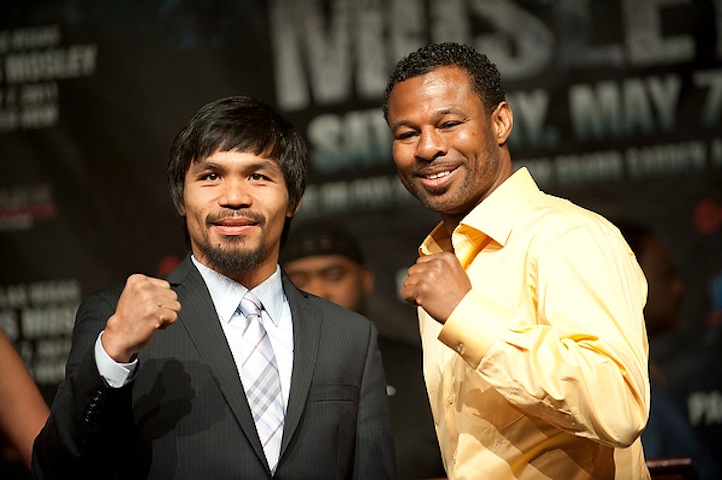 They say nice guys finish last, but Manny Pacquiao counters that cliché with a left hook similar to the one that exploded on the face of Ricky Hatton in their 2009 fight. This nice guy finishes first.

In the buildup to Pacquiao’s May 7th battle against Shane Mosley, one might think that the two are going to get engaged rather than engage in a thrilling conflict that has become the most anticipated fight of the year.

Despite the amount of boxing scribes and fans that have likened this fight to the ending of Old Yeller, Pacquiao speaks highly of Mosley and would have you think the two are on the same level. As a matter of fact, the Filipino boxer/congressman/singer’s next tune might as well be a cover of Aretha Franklin’s “Respect,” considering the amount of respect he has shown the 39-year-old future hall-of-famer heading into this fight.

”You heard I trained hard for this fight. You know why? Because Mosley is a good fighter,” says Pacquiao. “You think he’s old? He’s not old. He moves like he’s 31-years-old. He has hand speed, foot speed and he knocked [Antonio] Margarito out. I fought Margarito and we went twelve rounds. He has an advantage there.”

See? He’s almost too nice. He’s just nice enough to lull you into thinking that the clinches inside of the boxing ring are done out of affection. That is, until he pulls away and throttles you with a bevy of power shots that will have your grandkids coming out of the womb bruised.

“I still have a killer instinct,” Pacquiao says as his brow furrows when questioned if he is going to seek the knockout when he fights Mosley. But he can only clench his jaw muscles for so long before he lets out a giggle.

He almost had us there.