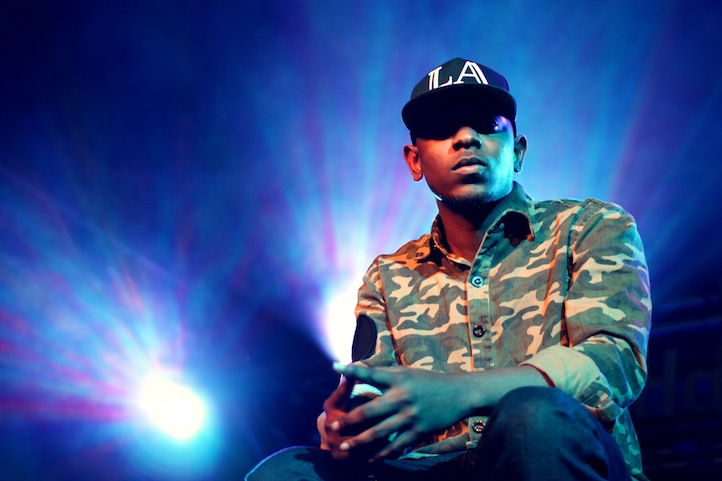 On the eve of the release Kendrick Lamar‘s major label debut, the 25-year-old is working. Fresh off of a late night performance in the neon confines of Las Vegas, Lamar satisfies the dreams of a select few fans by bringing them backstage for pictures. This is stop number 32 on his 34 city tour. One would think that the celebration of the unveiling for good kid, m.A.A.d city would consist of popping bottles at a luxurious Sin City nightclub. Either that, or resting his weary body in an attempt to replenish his depleted energy bar.

Neither will happen on this night.

At 2am, Lamar invites a select few to a late night studio session in the outskirts of Vegas. In his second home he can get some work done and discuss his journey from unknown Compton emcee to the hottest thing smoking in the industry while being comfortable in black house shoes (“I wear these whenever I’m in the studio,” he says with a chuckle). Working feverishly on what would become “The Heart Pt. 3,” Lamar immediately dissolves into the studio as fellow Black Hippy members Jay Rock and Ab Soul, along with other Top Dawg Entertainment members, lurk about the premises. You won’t find a gaggle of groupies milling about. This is business, the pleasure is the satisfaction he receives from touching lives with his music. After all, that’s what got Lamar here in the first place.

“The first time I saw him walk into the studio I knew he was something special,” the older brother of TDE known as Jay Rock boasts as he awaits his turn in the booth. “I was struggling with my verse and here he is, without a pad and pen, destroying the session.”

Back in early 2009, Lamar was just trying to get heard. With Jay Rock having already inked a deal with Warner Bros. Records and his video for “All My Life” featuring Lil Wayne getting spins on BET and MTV, Lamar was simply trying to soak up game. Meanwhile, Jay Rock and TDE’s head honcho Dude Dawg were already singing the praises of the Compton emcee to whoever would listen. Although the rest of the world had no idea about the golden mind that they were grooming, TDE’s marketing machine was already in high gear as they offered any open minded journalist a taste of what the artist formally known as K.Dot had to offer. Turns out their lofty proclamations that Kendrick Lamar was the Nasir Jones of Compton rang true regardless of the hyperbole that the statement seemingly oozed back then.

The Overly Dedicated mixtape set the table for his signing to Dr. Dre‘s Aftermath imprint. Section 80 put him on the map and good kid, m.A.A.d city has thrust him into the stratosphere with an instant classic under his belt that has helped define a generation.

Lamar emerges from the booth at roughly 2:45am and strolls into one of the many lounge rooms. Not the one with the pinball machines, plasma television and stripper pole nestled in the corner. He heads to the room where he’s set to do two interviews. Although he’s been slammed with tons of interview request thanks to his newfound fame, Lamar doesn’t seem the least bit annoyed by this early morning session; especially considering that the interviews are with people who have supported him since the K.Dot era. Pleasantries are exchanged, small talk about how his last show in Vegas less than a year ago barely had 200 people in attendance (his return show sold out two days before show time) and Lamar gets right down to business. Lamar opens up about the piece of art that is nothing more than a Pulp Fiction structured biography on his life in Compton.

“Everything on the album is 100% real. It was easy for me to write it that way because I couldn’t fabricate anything,” Lamar says as his eyes peer up from underneath his “LA” hat. “I know that the people close to me, when they finally get to hear it, they’ll be like ‘whoa, he’s revisiting demons,’ and this album was really about me moving on with my life.”

good kid m.A.A.d city is much like the audio version of ’90s era hood flicks like Boyz N Da Hood and Juice as Lamar struggles to not succumb to the pressure of the streets. It’s a very personal project for Lamar. The album’s artwork is filled with ghosts from his past. Images of family members and friends that have all been crushed by the weight of the streets are scattered throughout the artwork and their stories are told over production and interludes that tie the narrative together.

“Truthfully, being able to get that out is a lot of skeletons in the closet that put a burden on your life is significant,” he continues. “My best way of venting is telling the truth about it. To the youth of this generation: I come from where you come from. I made a change within myself to do something positive at the end of the day and you can do it too.”

It’s not just the story, it’s the lyrical dexterity coupled with a voice that contains a unique accent that hooks the listener. Everyone from Lil Wayne to Andre 3000 have championed the rhymeslinger. The latter was recently filmed by Rolling Stone listening to Lamar’s “Bitch, Don’t Kill My Vibe” andd subsequently walking off camera, shaking his head in disbelief. It’s rare that you come across a talent like Lamar and his album stresses the fact that he’s not in this simply to cash in off of a hot single. The entire album is built around a concept with hopes of the listener peeling back the layers of his life years down the line. The personal narrative is also not diluted by overwhelming guest appearances — much like a Queensbridge emcee who’s debut is still heralded as one of the quintessential hip hop recordings of all-time.

“Illmatic? For people to even put my album in the light of that is an accomplishment. It’s crazy to even be mentioned with it, but also scary at the same time,” Lamar says with an extraordinarily modest grin. Days after the album leaked to the internet, lauded hip hop scribe Keith Murphy asked “Is Kendrick Lamar’s good kid, m.A.A.d city the most important debut since Illmatic?” in a column for Vibe.com. It’s evident that it’s not only his crew that sees the parallels with the Queensbridge wordsmith. However, despite the comparison, Ab Soul feels that Lamar’s debut has to be valued on its own merit without being compared to a near two decade classic.

“This is rare,” the afro-ed rapper says while seated in the studio’s kitchen. “I don’t think this has been done quite in this manner. Nas is definitely the greatest (but) Kendrick’s been compared to a lot of great legends already. That’s great and all but I think that this is something different.”

While it is yet to be seen if Lamar’s debut will stand the test of time, Soul’s point that it is something different rings true. good kid, m.A.A.d city captures the essence of a generation that were mere toddlers when the Los Angeles riots ravaged Compton and the rest of the California. With misdirected anger and a lack of role models present, their story has yet to be told.

“That era – where the age range of those listeners today is between 30-40 – can recognize that Illmatic was the album for the ’90s era. The stories he was telling was something I could relate to years later,” Lamar explains while suggesting that his album aimed to do the same for the 2000’s. “The response from the early reviews are all saying the same thing: that this album is capturing the feeling of this era of kids and it’s just a weird feeling. It takes a whole lot of responsibility to keep that up in the long run. Longevity is something I don’t have yet. I need the years behind me like Nas had. Illmatic will always be number one.”