The Beatles’ released their acclaimed psych rock album, Sgt. Pepper’s Lonely Hearts Club Band, in 1967. Then there’s Fragile, the Yes band’s 1972 release containing the 10:31 length “America” that serves as the quintessence of progressive rock. Now imagine a homage and modern, unintentional answer to those impactful albums. The result could be catastrophic or brilliant if the production isn’t balanced. Fortunate for UK-based band, Kasabian, they have craftily combined ‘60s psych rock and ‘70s prog rock, with the modernity of electronic synth orientation on their latest album, 48:13 (out now via Harvest Records). Allegedly, even Ringo Starr of The Beatles raved about Kasabian’s musical greatness thus adding to validity of the appeal of their genre-defying style. The band, consisting of vocalist Tom Meighan, guitarist and vocalist Sergio “Serge” Pizzorno, bassist Chris Edwards, and drummer Ian Matthews, is not afraid to change. Their latest album is evidence of that observation. 48:13, accumulating to a total running time of 48 minutes and 13 seconds (hence the album title), is more danceable and electro-pop oriented than their past releases.

While the band has a solid following in Europe, their takeover in the States is proving to be a gradual process. This year marks the 10th anniversary of their debut self-titled album. This month, 48:13 was released in the States. Last week, Kasabian performed on Jimmy Kimmel Live! The aforementioned milestones reflect Kasabian’s continuous development as a band. Here, Serge speaks with us about the journey ahead.

Life + Times: Before I can even talk about 48:13, you guys already have so many new things going on. So, I have to confirm whether or not what I’m hearing is even true. Is it true you all are collaborating with Idris Elba on some Christmas record? (Laughs)
Sergio Pizzorno: (Laughs) Um, basically one of my friends, Noel Fielding, he was half of The Mighty Boosh. Together we did music for the series. It’s such a complex story. I’m sorry. Basically the music for the show is done under this band called the Loose Tapestries. It’s a fictitious band that we made up, Loose Tapestries. So, we were just enjoying making the music for the first two series. We put an album out for the series. We were in the studio and we had a lot of margaritas – like a lot. We were sort of just messing around in the studio and I was like, ‘What would be the worst type of music that you could ever write?’ We were like, ‘Christmas songs are the worst, uncool, no-go area.’ We talked about how there’s not been any great ones since the ‘70s really. So we thought, ‘Wow, let’s just do one.’ In the spirit of margarita, we thought we’d do one. And then, you have to have like a rap on it, because again it’s just so ridiculous. Idris is a really good friend and he just started to rap on it. I don’t know what we’re gonna do with it. It’s just a sort of an ‘in’ joke.

L+T: Yeah! I’ve heard of The Mighty Boosh show before too. Also, you’re already talking about a new album! How is that even possible? You just released 48:13.
SP: I sometimes forget when you do get interviewed that people sort of (Pause) It gets written and then all of a sudden it’s kind of a story. Off the cuff someone said, “[Are] you talking about another record?” I said, ‘No, I have no idea.’ There’s no songs or anything.

L+T: So, nothing’s set in concrete yet?
SP: At the same time, it’s not to say that everyday I’m not kind of thinking about the next move. I’d like to get something out reasonably quick because I just feel like creatively I’m in a sort of good spot. But the thing is when nothing exists, you’ve got no idea because you could spend three months in the studio writing nothing, you know what I mean. So there’s no songs that exist, but in my head like it would be nice to get an album out quickly I think.

L+T: Very cool. Okay, those were my non-related to 48:13 questions. One thing I admire about this fifth album is the fearlessness of it all. You guys are not afraid to mix things up regardless of what critics may say. It’s had a lot of mixed reviews. What has aided in the evolution of Kasabian specifically?
SP: I suppose for this record it feels like it’s a real good sort of indication of where we got to. From making most of the records, this is a nice combination of each. You just gotta have broad shoulders. We don’t make things easy for people and I’m sort of very aware of that. People like you to sort of make things easy for them like you’re a rock band or you’re on the fence, you know what I mean. When you start mixing stuff up, it confuses people. When you confuse people then that usually means people either hate it or people really appreciate it – you’re trying something new or at least attempt it. Even with the title it’s not supposed to be cool or clever or anything. The idea for the record, I mean musically from the get go, was to make something really direct with the lyrics and the music…When you get this far down the line with people, they’ll have strong opinions. 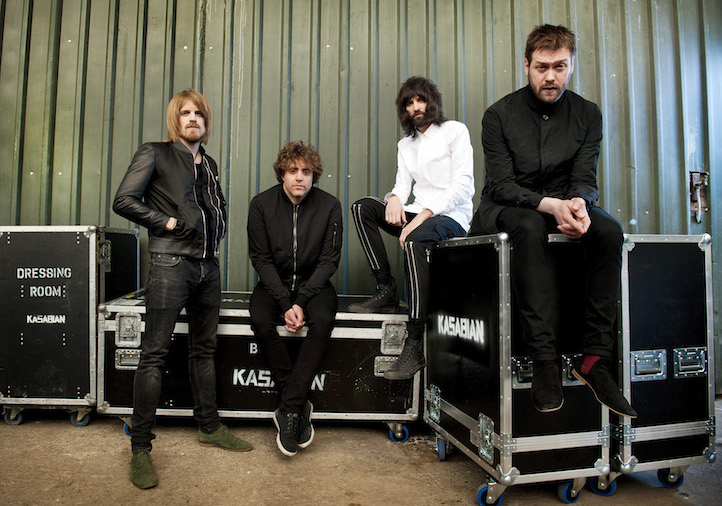 L+T: Whether they want to think they do or not, they will always base something off of the first album. You know, the debut album was ten years ago and they hold on to that like, ‘Okay, this is a band that’s indie rock or whatever. They’re not supposed to change.’
SP: Yeah, certainly not supposed to change. When you do, they’re like, “Oh, what’s going on?” I suppose some of my favorite artists have constantly done that, you know. I think when you look back, if you could be bothered to look back at some of those artists that do that, I’m sure the reviews were very confused and very angry. When you make a record that everyone understands instantly – I mean that’s fine – but I don’t think those albums or that art lasts very long. If you’ve got something out there that’s very mixed, then it means you’ve kind of done something new, I hope; or something that would last a while and maybe in ten years people look back and go, “Oh, shit! That was interesting. What did that music sound like 20 years ago?”

L+T: Valid point. Although I know making albums is a business, if you’re not proud of it as an artist and have that integrity you’re not going to want to push it either.
SP: God, no. There’s certain buttons you can push as an artist or a songwriter. Over the years you learn certain things. You see how other people do and there’s certain buttons you can push to make people like it…I’ve kind of realized over the years just something as simple as a song title that has words that have nothing to do with the song. It gets people confused and I kind of like that, you know. I sort of want that. Then, certain songs that obviously completely change and go on tangents. Well, there’s always playfulness and psychedelic nature to the music that I love, but I think that’s what’s great about what we’ve done on 48:13. I also appreciate that’s probably what makes people go, “Well, what’s going on there?”

L+T: Well, the fact that you’re able to talk about it so passionately shows me that you’re 180 percent behind this release.
SP: Yeah, definitely. I feel it’s pretty exciting…The next album no one really knows – me neither at this point – it could be anything, you know. We could travel anywhere and I think that’s really exciting. The people that I’ve always loved and admired have always done that. You’re kind of sort interested in what’s gonna happen next.