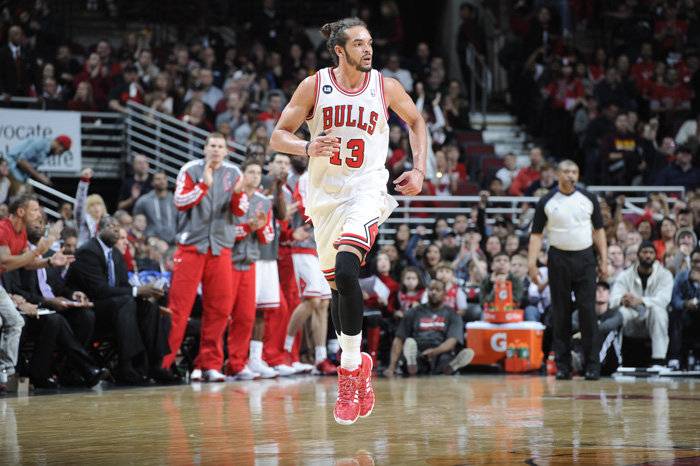 Derrick Rose has been out for the Chicago Bulls almost the entire season, but the MVP chants in the United Center still persist. Luol Deng, once one of their most valuable pieces, was traded in January for nothing of immediate value, yet the Bulls remain one of the top four teams in the Eastern Conference. The paramount constant, other than head coach Tom Thibodeau, is all-star center Joakim Noah. With Rose out, Deng gone and plenty of adversity to face, Noah is playing with more confidence than ever and has the Bulls on his shoulders.

“Especially where we come from – Brooklyn, New York – with all the ups and downs Joakim’s been through in his career, and now he’s on this stage getting MVP chants, it’s great,” says Noah’s teammate Taj Gibson. “It shows the amount of work he’s put in and the amount of heart he has. It’s great for him.”

Noah embodies what it means to play the game the “right way,” competing with passion, heart, energy and selflessness. He doesn’t just make the right plays, he makes winning plays. Everyone – teammates, opponents, his coach and opposing coaches – including himself attributes much of this emergence to simple confidence. “His rebounding, defense, playmaking and you can see the scoring component, he’s gotten better and better. He’s a lot more confident, he’s finishing better, making shots, making plays, so that was critical for us,” Thibodeau said after Noah finished with 23 points, 11 rebounds, eight assists, five blocks and three steals to help the Bulls to a hard-fought 94-87 win over the Kings.

“His game is through the roof right now, his confidence is through the roof,” Gibson added. “One thing in the NBA, it’s all about confidence, and when you work on your game and get that confidence going, you’re unstoppable. I feel that he’s taking it to the next level: head up, confidence, being a leader, doing all kinds of things in all different fashions. He’s become a strong leader, physically and vocally, and it’s showing on the court.”

Houston Rockets head coach Kevin McHale – a Hall of Fame big man in his own right – noticed the same things: “He’s just more confident in what he’s what doing. He’s making plays with the pass, he’s driving and kicking. When he was coming out [of college], I thought he’d be a picking-and-popping, playmaking four, and he’s doing more than that now. He should be Defensive Player of the Year. He’s done a great job with these guys. They’ve been winning a lot just on his energy, effort, determination and toughness. Those are all qualities that everybody appreciates.”

Noah has been a versatile cog for the Bulls. He has three triple-doubles this season – tied for second most in the league. His 12.3 points, 11.3 rebounds per game are career-highs; his five assists per game are the most by a center in 10 years. He’s showcased great passing and ballhandling skills, along an improved midrange jump shot, all season long. “It feels great,” he says, “because so many people were telling me not to take [jump shots] and I’m just confident now, and I feel like if I’m open, I need to knock that down. It’s a great feeling. That’s like the best thing to me every night, just knocking down a jump shot because so many people told me, ‘You can’t shoot, don’t shoot. You’re an energy guy, you’re not supposed to be shooting jump shots.’ To knock that down, there’s no better feeling.”

Most important, the Bulls are 37-30, well-positioned to win at least one playoff series. In college at the University of Florida, he was the emotional leader of a selfless, team-first squad that won back-to-back National Championships in 2006 and 2007. For Noah, that’s the only statistic that matters: winning. Not only do MVP chants and talk of being All-NBA First Team not phase him, it actually bothers him. 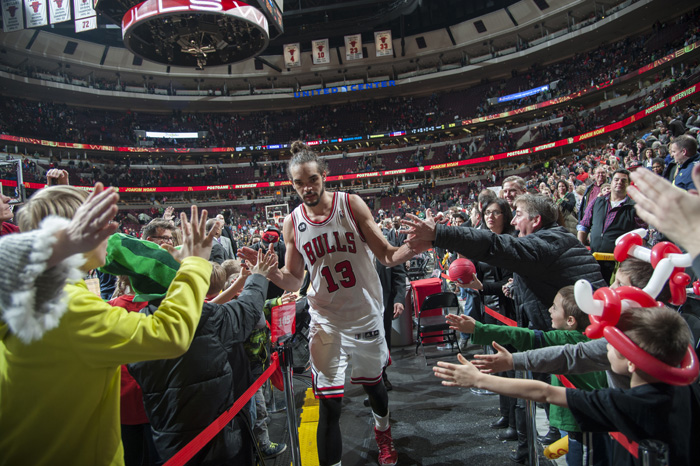 “I don’t like [the MVP chants],” he says. “That’s not what’s important to me. I’m just all about this team right now and I think we’ve been through so much, it’s not about individual accolades, it’s about us and everything we’ve gone through.”

“The most important thing is the respect that he has from his teammates,” added Thibodeau. “All the individual awards, I know Jo doesn’t care about that. He cares about winning, that’s what makes him so special. The thing that I like about what he does is, statistically, you can’t measure his true value to our team. All the things that he does helps us win, and that’s the most important statistic there is, and when you win, get recognized. He’s lifted a lot of people up, he’s going to do whatever’s necessary to win. If he needs to score, he scores; if we need him to make plays, he makes plays. And you can count on his defense every night. He just plays to win, that’s the thing that I respect about what he does.”