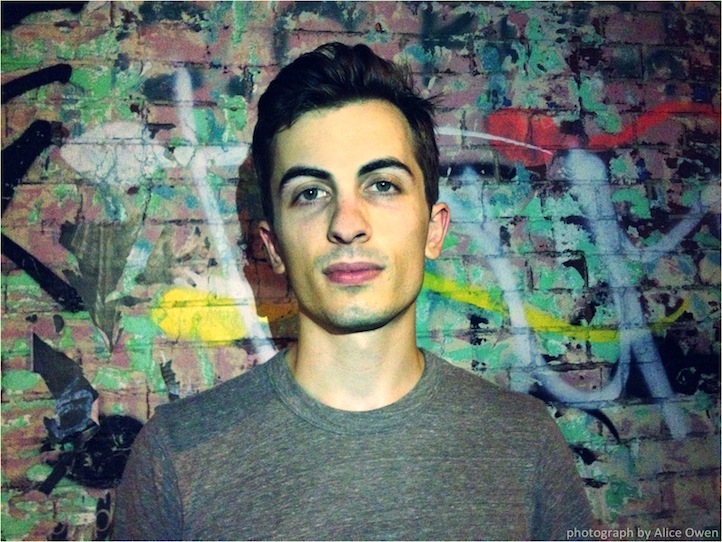 With albums ranging from a critically acclaimed mash-up of Radiohead layered with JAY Z (Jaydiohead) and a remix compilation of Beastie Boys’ Check Your Head, it is no wonder that DJ/producer, Max Tannone, was not afraid to mesh punk and hip-hop together to create an unlikely audio mural, Mic Check 1234! Despite receiving accolades from both entertainment gurus and the artists he has actually featured in his creations, the remixologist still considers himself as a budding artist. Tannone humbly states, “I am flattered that people like what I’ve put out so far, but I am trying to go further and do some different things.” Tannone sits with Life + Times to discuss how it felt to be approached by Beastie Boys, the concept behind his latest project and takes a stand on a current question raised to artists: Is a DJ a musician?

Life + Times: You began DJing and producing at the age of sixteen. What would you say stirred your early interest in music and in turn shaped that passion into a career?
Max Tannone: Before DJing and producing, I was drumming in my middle school band. Once I started playing the drum set, I began to better understand hip-hop; which is what I was primarily listening to at the time. Around that time, I got Fruity Loops (digital audio workstation) and began making beats. I was amazed that I could arrange sounds on the screen and get them to sound like the patterns I was playing on the drum kit. This was about 2002 when The Neptunes were having their supreme reign over the urban music world. Like many hip-hop heads, I was obsessed with the drum pattern from “Grindin'” by Clipse. I remember reading online about the drum sounds they used from the Korg Triton (music synthesizer). The idea of making hip-hop started to seem more accessible and possible to me. So I just tried to emulate what they did. Since then, I’ve just continued to learn and experiment…and different projects and ideas have taken shape as a result.

L+T: Tracks from JAY Z, Radiohead, Ghostface Killah, Beastie Boys, Mos Def, Talib Kweli and even the film score from Moon have all been mixed in your past projects. Are there certain themes you brainstorm, and then choose the artists that fit your selected motif best?
MT: All of the mix projects are kind of like my dream scenarios, my favorite artists that I imagined working with. I realized the possibility of having a sit down with Ghostface and convincing him to do an Afro-funk themed album with me seemed pretty unlikely, so I found his a cappella versions online and did it myself, I guess to satisfy my own curiosity more than anything. Fortunately, all feedback from the artists has been positive and pretty exciting for me. I think I would get an ‘A’ for sticking to themes. With the Moon inspired project, I really loved the film, thought the music was amazing and wanted to express my appreciation of both.

L+T: You have cited Beastie Boys as one of your inspirations for becoming a producer. When you were approached by them in 2009 to do a remix of Check Your Head, what was your initial reaction and how did it come about?
MT: My initial reaction was excitement. Beastie Boy,  MCA, heard the Jaydiohead project and thought it would be fun to create remixes using only material from Check Your Head; which was a great idea because that album contained a lot of funk and rock that lent itself to being re-made with their own vocals layered on top. One of the many great things about the Beastie Boys is that they have always been open to musical experimentation and having fun. My goal was to try and amplify that, skewed from the perspective of a long-time listener. More importantly, I can’t mention any of this without saying rest in peace to Adam Yauch.

L+T: Speaking of acknowledgment, your Jaydiohead mash-up of JAY Z and Radiohead received nods from JAY Z himself, Gwyneth Paltrow, MTV and other industry tastemakers. It seems like the news about that particular album spread like wildfire. Was this strictly viral from Soundcloud?
MT: Yeah. I didn’t expect it or plan for it. I remember finding it posted on a pretty well-known Radiohead fan site and I was pretty happy. A few days later my friend called me at 1 A.M. and said that Carson Daly mentioned it on his late night NBC show and then MTV wrote a news story around the same time. It was exciting for me, mainly because it meant that people liked the project. Some people hated it, which was fun too. But JAY Z liked it, so there!

L+T Mic Check 1234! made me think of an analogy. Certain wines and beers serve as the perfect complement to various dishes. How are you able to pair two artists together from completely different genres to create a well-mixed track? How does the process work?
MT: Mic Check 1234! was really about attitude and lyrical content. Punk has such a visceral energy to it, and a lot of rap shares that aesthetic. Rap wise, there were a few songs I knew would work for the project before beginning, such as “Hip-Hop” by Dead Prez and “Definition” by Black Star. Those tracks have a tempo, energy and lyrical content that fit well against the sharp sounds of electric guitar and faster punk drums. I start by having lists of tracks from both genres that I think will work. Next I find the tempo of everything and work out what matches up. So then I take a punk track and begin to chop it into different pieces and reconstruct it into a format that will fit the rap a cappella. If I think it sounds good, I will continue building it out, adding sounds and effects or I will scrap it and try a different pairing. What tracks I’m able to use also depends on what a cappella I can find and how much open space there is in the punk track, as you need to find some spaces that don’t have singing. That’s pretty much the process.

L+T: Hip-hop and punk music are both genres that evoke a bold statement in the issue that is being presented. Tell me how you came up with the concept to combine the two on your latest project.
MT: There is a common feeling you get when listening to “Ante Up” by M.O.P. and “Anarchy in the U.K.” by The Sex Pistols. It’s like the audio equivalent to energy and aggression. Also, there is the social commentary that both genres provide. Punk and rap are both founded on rebellion and voicing your opinion of how things should be or shouldn’t be. So, the goal was to unify that idea. The inspiration was collaboration by Public Enemy with Anthrax, a lot of Beastie Boys material, all of the different things The Clash did and more. Take all of these artists from different genres and eras and try to imagine what they would sound like if they collaborated. That was the concept.

L+T: Are there certain artists you would like to collaborate with on your next project or do you prefer to work solo?
MT: Most of what I’ve done so far has been using a cappella of already released tracks, so I’m looking to collaborate with other artists, whether they rap, sing, make beats, anything really. I don’t know what the next thing is going to be, but that’s what is fun about it.

L+T: Currently, there’s a debate in the music industry that’s been raised by actual musicians and insiders that DJs that use the MIDI recorders, laptops and other electronic equipment are not artists. On the opposite side of the spectrum, there are those who disagree. What’s your stance on the issue being that you are both a DJ and producer? Do you consider yourself a musician?
MT: From a production standpoint, I don’t think that argument holds any water. Computers have influenced so many aspects of our lives, especially music creation. Some people have an issue with a DJ standing on stage and playing music, especially with the recent rise of electronic dance music drawing huge crowds. A lot of those DJs are playing tracks they already created, so of course they are musicians. Some people that look like DJs don’t even consider themselves as such, because they are improvising and triggering samples on the fly, creating melodies or performing complex turntablism maneuvers. All of these people are musicians. I feel that a DJ who is skillfully mixing other people’s tracks, working to build a mood or take the audience somewhere, is a musician too. Though ultimately I don’t have any interest in trying to classify myself or others as musicians or not, I do have an interest in being creative, giving my take on something and putting it back out into the world. Hopefully, I can inspire someone else to do the same.