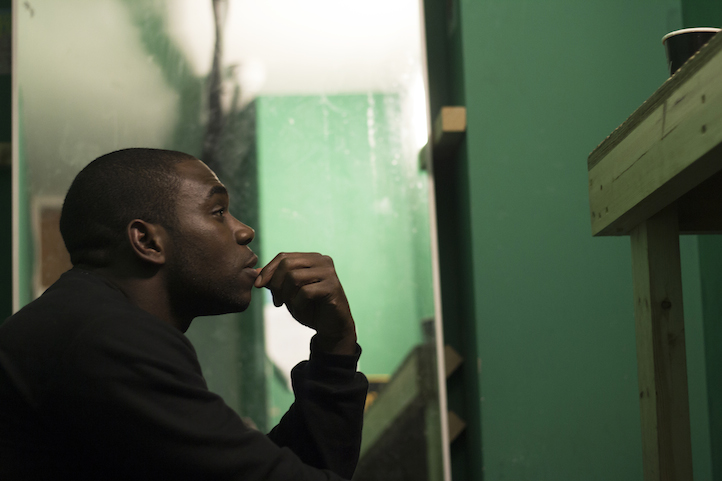 Artists such as Rudimental, Disclosure, and Cyril Hahn – just to name a few – are among the leaders of the synthy electronic and sexy soulful sound that first trended in the UK and is now ubiquitous in 2014. Although the current house and R&B productions are reminiscent to that of the ‘90s (Black Box, anyone?), it’s the infusion of pop that’s making these contemporary tunes sound more appetizing to new listeners worldwide. Bristol-based vocalist, Javeon, is no rookie to this urbane popsotronic (pop-soul-electronic hybrid term for the sake of creating yet another genre) movement out of the UK. “There’s a cross-pollination of styles going on and people are really ready to get with it more than they have before,” Javeon says. Over two years ago, the crooner signed to PMR Records and released a collaborative track with Julio Bashmore entitled “Love Without A Heart.” His most recent singles are the MNEK produced “Lovesong” and “Give Up” produced by Tourist – both will be on his debut album scheduled for release this summer. Javeon’s distinct ear for quality production – which cannot be taught – joined with his strong vocal talent adds freshness to this ever-evolving music scene.

Life+Times: In a recent interview you cited Usher and Craig David as a couple of your inspirations. Then, you said you’re not a product of your idols. I really admire that because nobody wants to hear a mimic. Tell me about your first introduction into music.
Javeon: Probably around the time I was six or eight or something like that, I used to spend a lot of time at my nan’s house where my cousins were. My oldest cousin at the time was living there and he was really into loud sound systems and stuff. He’d be, like, shaking down my poor nan’s house with his loud subwoofers. At that point in the ’90s – R&B wise – I think he was listening to a lot of Timbaland, Aaliyah, and Total. I just really loved it and I’d always sit in his room and go through all of his CDs and stuff. I just loved the feeling from it – the raw emotions from a lot of the music that was being brought up. As I got a little bit older – say between 12 or 13 – garage over here was really starting to pop on the underground level. Then, Craig David came around. At that point, garage [was] sort of the birth of the emcee being a solo act as to just being a host and an extension of a DJ set. The emcees were really coming into their own. Now, Craig David was kind of really bridging that gap between underground music and pop music. He emceed and he sang. I was starting to do that same stuff, so I really idolized that. From a more R&B side, I got to say it was probably Usher. My family is from the Caribbean – from Jamaica. So, I’ve always been around reggae music and all the soul music, but I only really took to ‘90s R&B really. That was the first genre I probably took to.

L+T: Craig David and his “Fill Me In” track was a huge international hit. It had its fair share of plays in the States too. I used to love that song and I still do. I have to admit, PMR Records and their artists are some game-changers. You’re signed with them. How is life with PMR? Do you get to practice creative freedom?
J: I think with every label – between the artists, the label, and your managers – there has to be a halfway street. You have to be prepared to work together as to just working on your own, but they do let me do a lot of my own thing. I think that’s what the good thing is about PMR Records is they don’t want to bring you in and change you. They want to bring you in and help you excel at your strong points. At the point in time when I got brought on, I didn’t really have a sound as it were. We sat down, we thought about my strongest points, and then we just round up a load of producers and I got in the studio for a year or two until I came out with what I have now. It’s great there. I really like it. It is like being part of a family. My manager, Ben Parmar – he started PMR Records – I would always stay at his house and I still stay at his house when I go up to London. I don’t really feel like I’m signed to a label. I’m surrounded by friends and I’m helping them and they’re helping me.

L+T: That’s great. I’m glad to hear that. Sometimes labels want to have their hand in the musical cookie jar a little too much.
J: Yeah and be a frustrated musician as it were.

L+T: Your latest single, “Give Up,” was produced by Tourist. Correct?
J: That’s right, yeah.

L+T: So, you have that and you also worked work with Julio Bashmore on “Love Without A Heart.” Tell me about your experience working with those producers in particular.
J: I’ve always been a featured artist way before I met the PMR guys. I’ve been collaborating with as many people as I can. When I emceed at clubs, I was a host and I met DJs and stuff and got featured on their tracks. When I first met Bashmore, it was weird because it was the first time I had ever done anything for myself, but it was really great. It was really relaxed and easy. He listened to me when quite a few people in the past hadn’t done that because I’m not a producer – but I do know melodies and I know what I like. He was the first person that was like, “Cool. I’ll take that onboard. Let’s try that out. If it works, it works [and] if it doesn’t, it doesn’t.” We just had a really easy working relationship. The best thing about it is that we were both into the same thing. At that point, I wasn’t fully into house music. He’s not straightforward house, I don’t think. At that point, he was as close to being straightforward house as I was used to working with. When I actually met up with him, he played me all the R&B stuff that he was into…and I was like, ‘Right! Okay, cool.’ So we just caught on like a house on fire. So, when I went to start working with Tourist, being two years down the line, it was that same kind of thing. I did a track just before then called “Lovesong.” Tourist was like, “What kind of track do you want to make? Do you want to make an uptempo one? Do you want to make a downtempo one? What kind of style do you want to do?” He’s quite versatile. We spent about ten minutes talking about it and I was like, ‘You know what? You love garage music and I love garage music – let’s just do what we do best. Let’s let it just flow naturally and I think it will.’ Before we knew it, we had the chords and I had the melodies. It just came really easy. Again, like working with Bashmore, it just flowed.

L+T: Yeah! I’m really looking forward to the album based off the songs we just talked about. “Lovesong” stays on repeat for me. Sometimes you have to keep your lips zipped about exactly who’s on the album and what you can discuss. What can you actually talk about regarding the album? What can everyone look forward to this summer?
J: I really don’t know what to say with this because I feel like everyone’s gonna take what they take from it. I’ve made an album that I’m happy with – which is a bit vague. It’s the kind of album I’d want to listen to. You can expect R&B, dance music being house and garage presented in a pop fashion. I’ve got production from MNEK [who] did “Lovesong,” a couple from Julio Bashmore, Tourist again, and a guy called Two Inch Punch who is also on my label. The undertone for the whole thing is R&B. You can expect to just make what you want from it really, but at the end of the day I’m really happy with what I’ve made. It can go really well or could not do [well] – but at the end of the day I’m gonna be really happy because I’ve spent time making something I’m really passionate about. I was actually able to express what was in my head all those years ago when I knew I wanted to make certain types of music and certain styles involved – but never knew actually how to go about making it.

L+T: The new age R&B out of the UK – it’s what you’re a part of. Then there’s Disclosure, Sam Smith, Rudimental, and the list continues. What is the whole concept and mood around this sound from your viewpoint?
J: I think it’s a couple of things. I think it’s obviously the age of the Internet – electronic music is just booming more than ever before. I think it makes it easier for people to experiment. It’s a lot easier for kids that are starting to make music to get into things and to expand in that kind of stuff. I also think as well with people like Rudimental and Disclosure, they’ve made it a lot easier because they’ve got a lot of R&B and soulful undertones through pop [and] drum n’ bass sort of venture that they’re going down. They’re making it a lot easier for everybody else to come through and because they’re doing so well I think a lot of the audience – the younger audience – are a lot more acceptable to R&B. R&B and pop – they were both quite a dirty word a few years back, but at the moment people are loving it.

“Give Up” is now released via PMR Records and is available on iTunes.