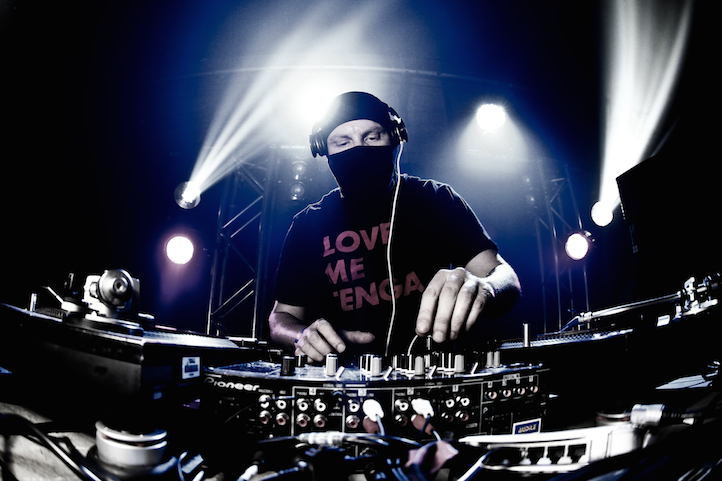 After studying the extensive Nervous Records archives, UK producer-DJ Jaguar Skills, created a 65-track compilation which features remixes and a cappella from the label’s catalog. Nervous 90’s Hip Hop Revisited (out now via iTunes) is an audio history book that educates listeners who aren’t familiar with the artists that make up the foundation of hip hop. For the hip hop heads, this release is a delightful stroll down memory lane through the genre’s arguable golden age in the ‘90s through the sounds of Nervous Records’ hip hop artists. Jag reconstructed and remixed each of the 65 tracks from the original Nervous master tapes flawlessly through old scratching, deep cuts and breaks – his signature raw style of producing.

The masked crusader of the DJ world is not limited to old school or new age production techniques – he skillfully blends the styles together to create hybrid sounds from everything ranging from hip hop to DnB. Here, Life + Times taps into Jaguar Skills’ hip hop roots…and Fight Club.

Life+Times: In an interview back in January, you stated the following: “For me the 10-year period of music between 1987-1997, that was when the best hip hop was made.” Everyone has their own opinion of what is the marked change in hip hop then versus now. From your viewpoint, what made the late ‘80s and ‘90s the best time period for hip hop?
Jaguar Skills: I guess it’s an age thing. I mean, that was the era that I fell in love with hip hop. I didn’t really dig it when the Southern hip hop sound came through, like the No Limit [Records] stuff and shit like that. Weirdly, I like a lot of those old Southern crank records now. But then, I thought of myself as a certified New York style B-Boy, and if you didn’t sample crusty old soul and funk records, use an MPC, or didn’t have a DJ in your crew – I wasn’t really feeling your sound, you know? I loved the Rawkus shit and some of the cool backpack era hip hop shit, but around 1998, I got into drum n’ bass and house. I started going to clubs a lot and hearing these sounds. But that era of hip hop, for me, was the most creative time for the culture. No one was making any real money, so the focus was on creativity and sounding as original you can. I loved the fact that every hip hop group sounded completely different to each other. You had Public Enemy, De La Soul, EPMD, Rakim, Big Daddy Kane…all of them had their own, very distinctive sound. And they all were releasing music in the same year. I dig all the fashions and shit from that time too. It was a wicked time to be into hip hop for sure.

L+T: Three years ago you created 30 Years of Hip Hop – which you completed in three days! Insane. Now you’re back with another documentary-via-mix release (90’s Hip-Hop Revisited). It is obvious you have a strong love for hip hop, but what was the driving force in creating a mix based off of the Nervous Records catalog specifically?
JS: Nervous approached my people and we chopped it up and made it. It was their idea. I was kind of bugged out when they asked me. I was and am a real big fan of their records back in the day. I loved all the Boot Camp [Clik] shit, and I fucking loved Da Beatminerz beats which are super grimy, jazzy, dark, just a great fucking sound. So, it wasn’t hard to accept the offer. I’m a big fan, so I viewed it, and treated it like a labor of love rather than anything else.

L+T: What was your favorite part of piecing together this audio doc?
JS: Getting the tapes, which were the old 24-track tapes of the classic hip hop records. As a producer, it was a real rush to hear the separate stems – to see how that style of hip hop was actually made [and] to see how they layered their drums and shit. It was amazing. I think I went through maybe 1,000 stems. I wanted to find the best shit possible. It was like I was at my favorite record store and I had found a box of the rarest shit around and I spent 2 months listening to it all. You know, I found a lost KRS-One vocal and found some amazing old samples. I literally remade every track but tried to make it sound like it came out in 1992. I wanted it to sound like a promo mixtape that you’ve just discovered from 1992. I got guys into re-play samples and put so much extra production into it, but I didn’t want it to be out of context with what I was making, which was a grimy ass hip hop record, in a Beatminerz style.

L+T: I particularly admire Nervous Records’ wide range of artists both current and past. It’s a proper indie hip house hybrid label that was ahead of its time in so many ways. Any chance for an Armand Van Helden-meets-Smif N Wessun mix later in life? Of course, I’m game for sooner than later.
JS: We talked about maybe making this project into more of a “mash-up” thing. But really, man, personally, I would have been upset to hear that as a fan. I’m not too sure if Black Moon lends itself to some house shit. I’m just not too sure. Either way, we decided that we should do a real ass, boom bap type of old school thing. I’m glad we did. I’d love, one day, to get the tapes of some of Nervous’ house stuff and do a house project with them; like, re-imagine some old house classics. Who knows? Maybe one day.

L+T: Is your performance with KRS-One at Cielo NYC still happening? How did he feel about your rework of “Big Up New York”?
JS: No, it’s not. And do I think he like’s it? Not too sure really. No one’s told me, but I’d just like to think he loves it! Haha! I think it’s fucking great, but you didn’t ask me! ☺

L+T: The track that I love the most is Black Moon’s “Powaful Impak!” with that funky bass line, jazz samples, and that old school scratching. The new technology has robbed much of the turntable style technique – especially because now you can create that sound through various plugins. How can turntablism keep its distinct art form without getting lost in the sea of Ableton, Serato, and the like?
JS: Depends how you look at it. If you can scratch, I don’t think it’s a problem using plug-ins and shit. You can apply the same moves to it virtually and get some wild sounds going on. I think you really need to know what you’re doing though, which means you have to practice on some turntables. It’s a skill and an art, and it’s the real Fight Club style of DJing. It’s a battle thing and battles will always pop off; but it’s not a very musical thing, so it doesn’t lend itself too much to main room club stuff. And, if you’re not a DJ yourself, I think it would be hard to decipher a lot of the moves in a turntablist battle. It’s not a super accessible thing so that’s why it will remain an underground thing. For today’s club DJs, I’m not too sure if most of them even can cut or scratch. I wonder how many of the Top 100 DJs can actually get down with the cuts – not many.

L+T: You also crafted The History of D&B 1991-2009 back in ‘09. When and how were you introduced to D&B?
JS: I’m from the UK and growing up it was hard to not listen to it. Where I grew up, you were kind of either into hip hop or this thing called happy hardcore. Then, jungle came out which changed into D&B. So I was pretty much aware of it from, like, 1994 onwards. A lot of my friends liked it more and when I started properly clubbing and raving, we would go to jungle and D&B raves. To me, it just sounded like some hard-ass Public Enemy shit speeded up. Coupled with some extensive substance experimentation, then you’re going to be up for like 42 hours, illegally raving, in a field! It blew my mind. Plus, my father was a reggae DJ, and I went to a lot of sound clashes back in the day with him, and it reminded me of that scene on steroids. For a young hooligan like myself, it was perfect. So, doing The History of D&B mix was another super-fun thing to do.

L+T: That sound has definitely evolved. Actually, electronic dance music as a whole has transitioned over the past five years even. I’d like to steer clear of what most feel are the negative changes in the “scene.” What do you consider unique and fun about the current dance music scene versus that of the past?
JS: It’s like the “dance music” scene is in a constant state of flux more than ever it feels to me. Like, in the UK, with dubstep I never hear it anymore in the clubs. It kind of just vanished one day and deep house kind of replaced it; and now that’s not cool anymore and it’s all about techno. But then it could be all about EDM in the US? I’m seeing people dig DnB lots more now than ever. Then, you got the twerk shit and the trap stuff. There’s so much, right? So many styles! Like, I can remember when it’s all about gabba hardcore, trip hop, minimal house, speed garage, UK funky, [and] B-more. I mean, people were championing moombahton only a second ago, right? Then, [the] rise and fall of dubstep. That’s what I love; it’s a real exciting scene if you view it as a whole. It’s a constantly evolving beast like hip hop in the ‘90s. I love it all. It’s like one big style of music to me: dance music. The different “styles” are just different tempos in reality. If you apply the mindset of a hip hop party DJ to electronic music, then it’s real fun to mix all the styles of dance music up. You can rock parties that way.

L+T: Finally, I end all of my interviews with DJ-producers with this question: Do you think a DJ is a musician?
JS: “Turntablism” is a musical art form. Sure, you’re using a turntable as an instrument. So yes, those dudes are “musicians,” I guess? They’re using “instruments,” right? Is a “club DJ”? No. Is a “club DJ” that plays his own mash-ups and shit a “musician”? I don’t know. A “club DJ” who just plays his own produced music? That dude is a “musician”, I think. I’ve seen “musicians” out there try to DJ and they’re fucking shit. They have no idea. Plus if you’re a “DJ” and you just play your own shit, then you’re not really a “DJ” anymore either. I think a DJ is supposed to play other people’s music. That’s what the fucking job is. I couldn’t really care a fuck about whether people view me as a musician. A lot DJs are touchy about it. I don’t care if you think I’m a musician or not. I’m a DJ first and that, to me, is enough. Oh, that, and being a ninja…HooooOOOOOO!!!!!