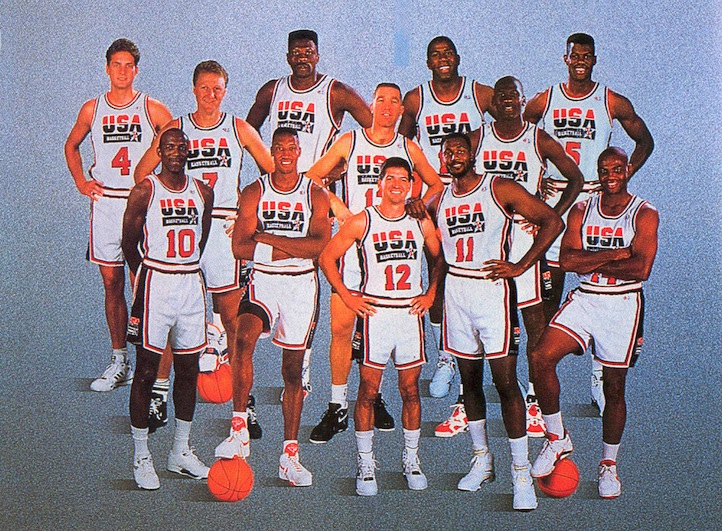 The recent announcement of the 2012 U.S. Men’s basketball team roster, as well as this year being the 20th anniversary of the 1992 Olympic games in Barcelona, have returned the Dream Team to the center of discussion in the sports world over the past few weeks. Whether reminiscing about the ’92 squad, or debating which Olympic team is better – this year’s or 1992’s – the work of longtime Sports Illustrated writer Jack McCallum is a key point of reference. In his book which came out this past Tuesday, Dream Team: How Michael, Magic, Larry, Charles and the Greatest Team Of All Time Conquered the World and Changed the Game of Basketball Forever, McCallum witnessed and documented the Dream Team’s entire journey from the inaugural practice to the gold medal ceremony. Life+Times recently caught up with the writer whose career spans over 30 years to discuss his latest book, the globalization of the game over the past 20 years, and who he thinks would win the epic, hypothetical matchup between the Dream Team and the 2012 Olympic team.

Life+Times: Did you envision writing some type of memoir like this back in 92, and did that influence what you noted and observed, or how you preserved your notes?
Jack McCallum: I did – I actually started a book about it, but it fell apart before the team even got together. The publisher just didn’t understand the concept. He thought they’d be playing together the whole year. Do you believe that? But I saved my notes, and, moreover, I had written dozens and dozens of stories about these guys for Sports Illustrated that formed the foundation of the book.

L+T: Were you surprised by how forthcoming the guys were about some of the more controversial issues, especially the selection of the team?
JM: I was surprised that Michael Jordan was that candid about Isaiah since he had already kind of tap-danced around the subject.

L+T: Of all the guys that you interviewed–player, coach or otherwise–was there a best, most compelling or most interesting subject?
JM: I had a much better interview with Scottie Pippen than I thought. I admittedly gave short shrift to him as a player because Michael so dominated everything. Having said that, getting Michael to open up about his father was very meaningful to me. Same with Larry Bird.

L+T: Obviously, the trip to Barcelona was one of the most significant moments in NBA and basketball history. Has the tremendous aftermath, specifically the steadily increasing globalization of the game and influx of foreign players, been surprising at all?
JM: None of us – at least not me – was smart enough to see how the explosion of the Dream Team would help international basketball. We thought it would be, oh, 25 years before the world would come close to catching up. It was more like 10.

L+T: After the way US dominated in 1992, how shocking was it to see the slump just 10 years later from 2002-2006 (finishing sixth in the 2002 FIBA World Championship, third in the ’04 Olympics, and third in the 2006 FIBA World Championship)?
JM: This goes hand in hand with the previous question. We were slow to realize it. We thought we could still send a half-assed team and go beat the world. Which is what we sent in 2002. That was a major, major wakeup call, as was the 2004 loss. You must build an Olympic or world team the same way you build a championship contender during the season. But it took us a while to learn that.

L+T: Having seen the Dream Team guys firsthand in practice, traveling, and in games, how do they compare to today’s stars in their approach to competition? Who wins between the Dream Team and any potential 2012 US Olympic squad?
JM: The best players of any generation – the very best – could play on any team. LeBron, Kobe, Durant … they join the ’92 Dream Team and fit in tomorrow. The big difference is inside. It’s not just because Dwight Howard isn’t playing; the Dream Team of ’92 was much, much, MUCH stronger inside. Ewing, Robinson and Karl Malone almost got overlooked in ’92 and they would absolutely dominate today’s Olympic team.

L+T: Many believe the Dream Team is the greatest team ever assembled, and you were lucky enough to get an inside look at the entire operation. How satisfying is it for you to finally get all of this great insight off your chest for public consumption?
JM: I know this sounds automatic. But, really, all you want to do is write a book that people enjoy. It is the greatest feeling a writer can have when someone says, “Hey, I really enjoyed that.” There is too much pressure on you to write a good book to feel truly relived until a number of people say that to you. And that’s already happened. So I feel pretty good.

Jack McCallum’s Dream Team: How Michael, Magic, Larry, Charles and the Greatest Team Of All Time Conquered the World and Changed the Game of Basketball Forever is available now.