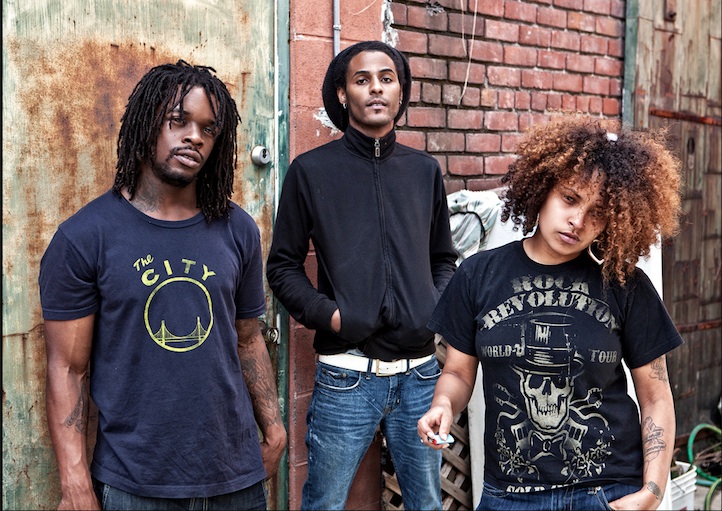 As a musician, former Mars Volta drummer Thomas Pridgen serves as the conduit in the bands he plays with, keeping time and synching up his fellow bandmates. But, with his latest band, the punk-infused The Memorials, the opinionated Pridgen is also looking to be the bridge in the culture of rock and with young black youth. Here, he talks the writing process, working with Curren$y and Mos Def, and how The Memorials are “ghetto prog-rock with a twist of class.”

Life + Times: You’ve said before that you’ve noticed something missing in rock. What is it?
Thomas Pridgen: I feel like the the young black urban voice is missing. We don’t just listen to rap and R&B. I’d love to see more young musicians from the black ghettos picking up instruments and rocking out. It’s weird. I guess picking up a craft and taking lessons isn’t normal.

L+T: You’ve said in the past that a key part of your band is the diversity of styles. What does a work of art gain from incorporating multiple perspectives, whether it be a song, a film, or a book?
TP: I think it gains originality when people who create songs have diverse backgrounds. A lot of what’s written and played ends up falling all over the spectrum, sometimes creating sub genres and new unknown styles. I call it being hybrid – getting things from here and there and putting your twist on it.

L+T: To what degree does the environment that a record was recorded in affect the final product?
TP: Yeah I think, when writing music, I’m inspired by just about anything. I think for an artist, inspiration is one of the most important things to have. It keeps you motivated. For example, in the studio, I love having different people come to listen to playbacks. I like to see how the music I’m making affects them. I like the input. And sometimes maybe it’s just a facial expression that can let you know how someone feels.

L+T: You’ve recorded with hip hop acts like Curren$y and Mos Def. How were those experiences different than more rock oriented recording sessions? What was the environment like?
TP: Curren$y is a cool, really laid back dude. So is Mos. I think working with those guys was some of the coolest and most laid back experiences I’ve had. They just let me do me…. which is always fun. And I really enjoyed playing on hip hop songs. Lots of people don’t know me from that side of the fence but I enjoy the music they make. I often tried to emulate old drum machines and familiar break beats. J dilla behind-the-beat type grooves.

L+T: What’s a mistake you’ve made?
TP: Just opening my mouth and saying things that could offend people. I forget that people are really paying so much attention to me it’s almost like living under some sort of microscope. Some people are overly sensitive and emotional about what’s said. I’ve always been taught at an early age to speak my mind, but it’s not cool when people get offended. I don’t like offending fans and people who enjoy what I’m doing.

L+T: So then, what’s something you thought was a mistake, but turned out beneficial?
TP: Well I think the The Mars Volta split could’ve been seen as a mistake, but I’m way more happy that I have this project. And the way TMV is, I would’ve never really been able to ever fully do my own project in this capacity or see things from this side of the fence. I’m happier.

L+T: What about Hip-Hop?
TP: Hip-Hop has changed a lot. I have to say I can’t describe Hip-Hop in one word…. I just think it’s funny that all these guys and gals have such huge fan bases and are seen as Gods. Basically totally glorified, but don’t say anything musically that sticks to the ribs. They have the world in there hands and they talk about nothing most of the time. If I had that many fans, I wouldn’t talk about my car or Louis Vuitton, or half of the simple shit Hip-Hop artists care to talk about.

L+T: What about your sound?
TP: Our sound could be described as soulful hard punk rock funk thrash alternative… I call it ghetto prog rock with a twist of class.

L+T:Where did the name The Memorials come from?
TP: [The Memorials’] Nick [Brewer] came up with the name. A memorial is something used to mark a time, place or event. So our band is a memorial to when music was real. A memorial to the greats who played instruments, like the James Brown’s and the Jimi’s, the Prince’s. Real music with a message.

L+T: What favorite artist of yours would your fans be most surprised by? TP: [Street artists] ADEK and MQUE. They get up everywhere. And REVOK. He’s probably the greatest graffiti artist painting right now. Banksy also. I’ve seen his shit. It’s always a surprise

L+T: If you could collaborate with any artist, living or dead, who would it be?
TP: Michael Jackson was always a dream person to play music with, just because of the huge shows and how much I love his music. I’d also say Hendrix, I [would have loved] to play with him. Prince also. I think we could do some sick music together. I’ve actually been trying to contact him about producing our next record. Let’s see what happens.