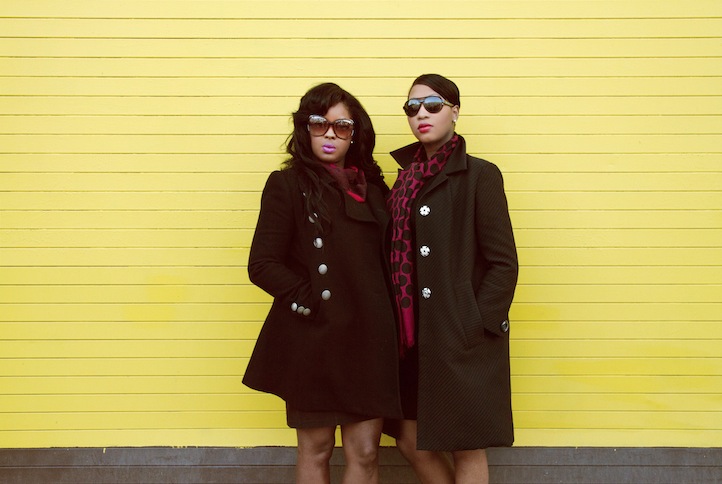 Terri Walker and Nicole Wray have both made rounds in the music sphere, collaborating with other artists, providing background vocals and putting together their own solo projects. After years of doing that independently, Walker and Wray linked up to form Lady, and the duo is bringing the best out of each other. Teaming up with Truth & Soul Records, and producers Leon Michels and Jeff Silverman, the self-titled debut album, is a return to rich, stripped-down 1960s-esque soul. While Walker is from London and Wray from Atlanta, the music transcends any cultural and geographical differences.

“If you’d been there when we were actually writing a song, you would have felt the magic, because think about this, four people all playing at the same time, there was never an argument of ‘I don’t want to do this, I don’t want to do that,’ said Walker. “There was never anyone going, “Um, I’m not really feeling that,” so that means that it was meant to be. It just feels right, that’s what I have to keep saying. It felt right and it’s something that the industry right now absolutely is missing, especially from our age group. I’m not trying to be too swagged out right now but this real life right here.

Life+Times caught up with Walker and Wray to talk Lady, their influences and soul music.

Life+Times: How did you all connect with each other, and why did you decide to collaborate for a project?
Nicole Wray: Well, Terri and I met three years ago in New York City. She was out there working with Ski Beatz, and I was there working with Ski, as well, and we kind of bonded. She came in one day – I had already heard some of her music and I loved it – and I briefly said hello to her and she knew who I was, so we bonded and had a lot of girl time, hanging out in the city, getting good food, really just getting to know each other. Then she introduced me to Truth & Soul [Records] a little bit after that – she was working on a project with them – and she introduced me to the guys and we just kicked it off. We went in the studio, started vibing out, they wanted to hear us do a couple songs and the rest is history, we just starting jamming out.

L+T: You’ve named the group Lady, and the name of the album is Lady, which is pretty universal and inclusive. Why did you pick that?
NW: I think initially we were gonna go with Walker-Wray, we were gonna use our last names. Then we went back home and the guys kind of creatively came up with Lady and it kind of made sense to go with that. It’s fun and we are ladies, we’re adults now, so it made sense.
Terri Walker: Because we are first ladies at the end of the day, but also because when we sing together, the stories that we’re talking about are not just Black, white, it’s stuff that can happen to anyone. It’s all over. Anyone can go through the same situations that we’re talking about on this album. “Lady” is really meant to be for each lady.

L+T: Both of you have extensive careers recording music as both solo and featured artists. Was it different for you recording an album as a duet where you’re both equally featured?
TW: No. Me and her have the same history practically. The more we hangout, the more I realize how similar we are. This is something that I think we were meant to do That’s why it’s so effortless, we’re not really having to overly think about it style-wise or what we’re talking about, how we blend our voices. Really we think what we’re talking about is so realistic for us, that to us it can’t be anything easier. That’s my sister right there.
NW: We know what we want now, and so it’s effortless. We’ve been through so much as artists, trying to find our ways to where we want to be, like Terri said, it’s crazy how we share the same similarities. I think because we’ve struggled and we’ve had careers and dipped and dabbled into a lot of different things, I think the destination has led us to one another in New York – the introduction to Truth & Soul. To sit down over a glass of wine and talk about girl talk and say, “Oh, I’ve been through this, I’ve been through that,” we relate. So we know there’s other women out there that can we relate to us, as well. The singing together, the energy and the harmonies and the love for music that we have is definitely there in our hearts, so the singing, that’s nothing. That’s what we do with our eyes closed.

L+T: How was it working with Leon Michels and Jeff Silverman, them laying the foundation for everything that you all wanted to do?
TW: It was easy. The guys [Michels and Silverman], this is what they do, that’s the sound that they do, that’s their forte. We added what we do. For our first two songs, the background track was already kind of there and we wrote on top of them. After that, it became a thing where we worked together and the song would be written. Laughing and jamming and talking and the next minute it would turn into a song, the next minute it would turn into an album; then next minute it was like, “Hey, we should give this a name, we should take this on the road.” It was a thing where it wasn’t initially planned out. We started writing songs and the songs get better and better. People keep asking us, “How did you guys plan this? Did you think about it?” and we were just kind of doing what we do. It was so organic.

L+T: Define soul music.
NW: To me, soul music is definitely raw. Like church. It’s freedom, it’s releasing the truth no matter what and not being weak. It’s letting people in instead of keeping this wall up. That’s what soul music is. Like Terri said before, we want the youth to gravitate towards it. It’s not that we don’t care about what else is out there because we do. I listen to 2Pac, I listen to 2 Chainz, Rick Ross, Meek Mill, I love all of that. But we still want to be able to let the youth know that it’s OK to be let down and maybe cry sometimes and talk to your friend and release. I think that’s what real soul music has always been, it’s about a testimony and not caring who’s watching or listening, just belt it out, let it out, get it over with.
TW: I agree with everything Nicole said. To me, basically, soul music is just not sugarcoated. It’s that rawness. The singers back didn’t need autotune and when they’re sining no one’s lip synching. They were out there with that microphone, and me and Nicole, we do that anyway. Soul music is just raw to me. 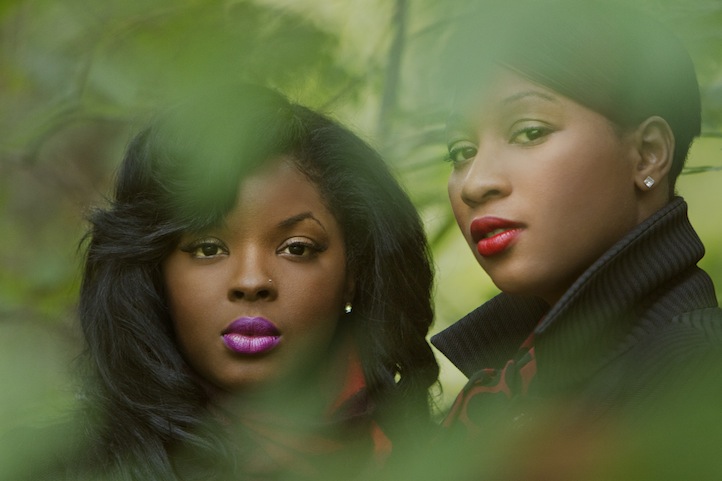 L+T: Both of you have done work in hip-hop and R&B. Is classic soul something that’s missing from today’s music, is that why you wanted to make this record?
NW: As Terri said before, we kind of stepped into a situation. This is their [Michels and Silverman] love, this is their sound, we didn’t bring this element. Terri comes from jazz, hip-hop, pop. I come from R&B, and we just added those elements. And today, the J. Cole‘s and the JAY Z‘s, they’re sampling this music anyway so why not introduce the youth to where it all started from. The Truth & Soul sound and the Lee Fields sound, it just feels good. When you hear it in a rap song you love it still, so why not love it when it’s wholeheartedly straight there. We’re coming from hip-hop and R&B so we already have those roots, we already come from that, we’re just going all the way back and letting it out. We’re belting it out, singing from our hearts, with genuine horns and drums and that feel-good, laid back old-school sound.

L+T: How has your background in hip-hop especially affected your approach to making soul music?
NW: We came in with the same situations and the problems of the world, nothing really changed lyrically. It’s just that – I feel – the instruments and the soundtrack behind it is more a serious sound, it’s more live sound, you can touch it, it’s not watered down, it’s not no auto-tune and all that stuff going on. It’s raw straight up lyrics where you can really belt out what’s going on and reach regular 9-to-5 people. The mothers, the single mothers, the people that’s getting up in the morning to go to work. I don’t think it’s that much different from what we were doing as far as the approach, it just made it a little bit more ill that we can really get it in and do what we always wanted to do with those live instrumentations behind us.
TW: Nicole obviously writes and I write a lot for other people. Writing is something that we do, so for me and Nicole it’s quite easy to adapt to styles anyway. It’s kind of fun because it’s our heritage, it’s where we come from, it’s what we listen to growing up, our parents grew up on this type of music. We would go to sleep and my mom would play records until the early morning. I would have that type of music in my head, I was probably built in it from a young age anyway. Obviously from our era, the ’80s and ’90s, we were always seeing R&B and hip-hop, that’s why I think we started going into that, but we really we were always feeling the Marvin Gaye‘s and Ella Fitzgerald‘s, Tina Turner, we come from that. So really and truly, it’s really our birthright to do this.

L+T: What is the soul music that you all came up on that influenced you?
TW: For me, it would be Bill Withers. I’m a big Bill Withers fan. It’s Anita Baker, Whitney Houston, even though she was kind of poppy, her voice was very soulful. Aretha Franklin. Even when we were growing up, Mary J. Blige. All of those people. Millie Jackson, Rick James. There’s so many people.
NW: For me, it would have to be Earth, Wind & Fire, the Jackson 5, all the Jacksons. Definitely Whitney Houston. I listened to to a lot of gospel, so The Winans. For me that’s soul because it’s a testimony in itself. Shirley Ceasar, all of that old gospel from the late 70s and early 80s. It feels good, to me it doesn’t feel old. When I listen to it, it feels young, it feels fresh, it’s real. The music is coming from a great place. The musicians, they are geniuses at what they they do and they bring it all together. It’s a feeling and that’s what we want to get across to the people if we haven’t ever before. Our fan base, they love us, they’re gonna gravitate toward whatever we do. I think genuinely, to evolve into this as grow into as grown women now – because we both got started very young, we didn’t know what the industry was – to a place where you feel comfortable, there’s no pressure and you can still talk about what’s going on in the world, you can help somebody that’s going through something to try and understand why they feel this way, and they can say, “Wow, I’m not the only one that feels this way,” and you can sing to it in your car, so why not do it.