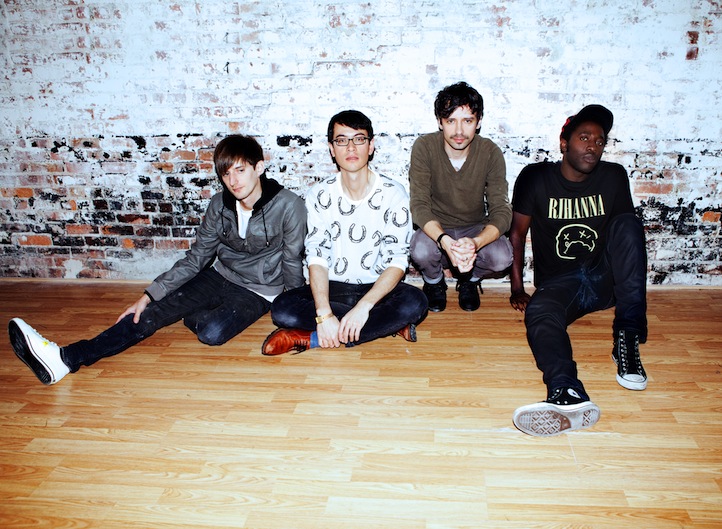 “The Empire never ended,” Kele Okereke of Bloc Party forcefully sings in the anthem, “Coliseum” on the band’s soon to be released album, Four. When asked if the aforementioned lyric is true of Bloc Party, Okereke responds with a confident “of course.” It’s been three years since the last release from British indie rock band, Bloc Party, and time could not have been more of a catalyst to complete their most raw and intimate album yet, Four. Slated to be released on August 21st, Four captures the essence of the band’s distinct personality and intrinsic artistic evolution. Okereke, guitarist and lead vocalist, explains the creation of Four and how the album has affected him on a personal level.

Life + Times: The development of Bloc Party’s music throughout the years began with a powerful punch of punk meets mellow indie alternative in 2005’s Silent Alarm, and experimented with a variety of sounds on both A Weekend in the City and Intimacy. How would you describe Four? Do you think the past projects shaped what you all wanted this album to sound like?
Kele Okereke: As a band we have always been fascinated by the possibilities of the studio. With Four, we tried to strip a lot of that back and concentrate on making a record that sounded like the four of us playing in a room. After making a very heavily produced and planned solo record, I became obsessed with the idea of things happening organically.

L+T: For a couple of years, the band went on hiatus and you went solo. Were you and the band still in communication?
KO: Yes, we were in communication; although it was infrequent because I had moved to New York. The only band member that I saw frequently was our drummer, Matt. He lives in Bed-Stuy (Brooklyn).

L+T: What was the determining factor that made you all decide to end the band’s two year pause and subsequently write and record Four?
KO: Well, we only agreed to take one year off, so two years was already slightly too long. It just felt very natural, like it was time to go back into the studio again.

L+T: “Random” and “epic” are two highly overused words in today’s social playground, but they are the most fitting for this particular question. In an effort to not engage in the act of spoiling the album’s many layers of details for readers, however, can you tell me what motivated the band to include your random “turkey breast” and epic “spider bite” anecdotes at the end of certain songs?
KO: Unbeknownst to us, the producer, Alex Newport, had been leaving the mics on during takes, so he had amassed all this random audio, just things we were saying to each other during the day. He played it all back to me just before the end of the session and I knew we had to use some of it. It made sense. It made the whole process seem a lot more real. As well as capturing our music, it felt like our personalities had been captured in the recordings as well.

L+T: The lyrics throughout Four are pointed and are reminiscent to a book of short stories. “My mind is open. My body is yours. Show me the sign.” are the lyrics of “Real Talk”, which are the seemingly unequivocal answer to Silent Alarm’s “Modern Love.” What was the inspiration behind “Real Talk?”
KO: It’s funny you ask that because I was writing a book of short stories during the recording and “Real Talk” is the only song on the record that comes directly from a scene in one of the short stories. For the most part, I was really trying to avoid mixing the ideas for the record and the ideas for the book because in my mind they were very separate, but I see now a little bit of cross-pollination was always going to be inevitable.

L+T: How do you all make the songwriting process a collaborative effort?
KO: In the past, members of the band have brought ideas to the table that were almost fully realized. With this record, everything had to be generated with the four of us in the room. Every chord sequence, every drum beat, every riff was shared and if there was a difference of opinion, it got aired and we had to make a session as a band before we moved on.

L+T: In “The Healing,” there is an assistance of violins and cellos. How would you describe the recording experience with those musicians?
KO: It was actually very easy. They were lovely to work with. They came in on the penultimate day and were very quick and amiable. We were super stressed because we were running out of time and due to time constraints we did think about scrapping the strings, but I’m glad that we didn’t because they added such a wonderful texture to the song.

L+T: Alex Newport has produced tracks for The Mars Volta, Death Cab for Cutie and At The Drive-In along with other talented artists. Creatively, did you all see eye to eye in the production of Four?
KO: Yes, we made it very clear from the beginning what we wanted and Alex was onboard. He knew all the musical references and understood our background so it was really a pleasure working with him.

L+T: You have been in the band since its formation in 1999. What would you say has been the grandest takeaway you have learned from recording Four in regards to your own personal progression?
KO: I think the most valuable lesson I have learnt from the recording of Four is that there is a real power to collaboration. It’s not a competition or a fight, everyone sees things differently and there is no right or wrong way. Music is not supposed to be perfect, it’s just an expression or an attempt to capture a moment and because of that, there is always something magical about the combined efforts of many as opposed to the singular vision of one