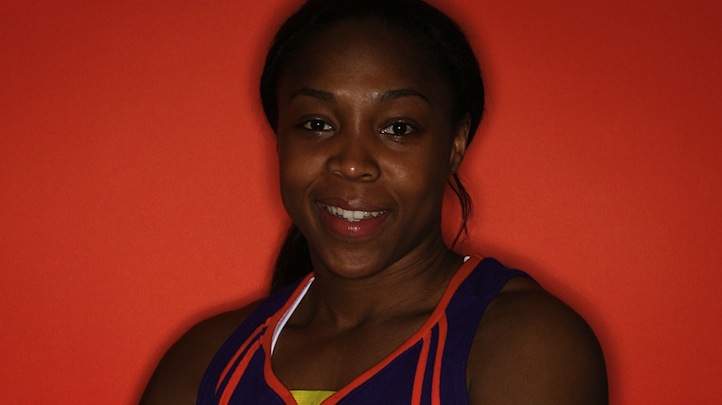 After a sluggish first half, in which she scored just two points, Cappie Pondexter is the first player to emerge from the locker room at halftime. With her New York Liberty trailing by two, she opens the third quarter guns blazing, scoring the first eight points to jolt her team into the lead. It’s no secret that she can heat up in a New York minute: days before, she scored 17 points in the fourth quarter to ensure a win for her squad. While the Liberty would eventually go on to lose by two on this night, such shows the drive that has helped propel Pondexter from the West Side of Chicago to the pinnacle of women’s basketball. Life + Times caught up with the 2008 Gold medalist and four-time All-Star player to talk about her success.

LT: Earlier this year, you were named one of the WNBA’s top 15 players of all time? How did it feel to receive such an honor?
CP: I never dreamed of it, but as a basketball player I always strived to be the best. When the honor came, I was shocked, because I’m only six years into the league and it’s been around for 15 years. I’m honored because other people that were selected were people I admired and grew up watching as a young player. To be a part of that is definitely a blessing, and challenging me to keep working harder, so I can keep staying on that list.

LT: You’ve been able to see the WNBA since it started. How has it been to see it evolve and develop over the years?
CP: It’s grown tremendously. From the time that I watched it [when it first started], you had maybe four or five premiere players. But now, you’ve got 10, 11, 12 players that are tough, that could get MVP at any second of the season. It just shows you the growth. Like today, if you look at Sylvia Fowles, her ability to get up and block shots is, like, crazy. You don’t see players like that 15 years ago, but now you got her, Tina Charles, the kid Cambridge from Tulsa.

LT: What obstacles did you face coming up as a female ballplayer?
CP: Women’s basketball wasn’t really respected [when I was growing up], you know what I mean. I’m 28 now. I started playing when I was 10, when it was unheard of for girls to really play with guys, so that was probably the biggest obstacle. But nowadays you got girls better than guys. It just shows you that women’s sports is definitely growing.

LT: Talk about Chicago basketball culture.
CP: Well, you know, Chicago is known for kids playing on the playground, having fun, and lethal basketball players. The ability to penetrate and break people down by crossing ’em over. That’s what we pretty much grow up on. You can see it in a lot of people’s games that come from Chicago: myself, Derrick Rose, D. Wade, Dee Brown, Luther Head. We all pretty much got that in our game.

LT: Chicago and New York both make claims to be the best basketball cities and produce of the best point guards. You’ve had experiences in both places. What’s your opinion?
CP: I definitely gotta ride with Chicago. In terms of the summer games and the runs, I think New York in on top right now. But we got a lot of ballers from Chicago that’s playing professionally now, I definitely have to give it to Chicago. I would have to say Chicago [has the better point guards, too]. One thing about us, if you look at every point guard from Chicago, our ability to break a defense down one-on-one is the same, and you can tell. Anybody from Chicago is all the same, and that just comes from playing on the playgrounds when we’re younger. A lot of people say we can’t shoot, but you got Derrick Rose proving that wrong, my mid-range jumper, D. Wade.

LT: You played for two legendary coaches coming up: Dorothy Gaters at Marshall High School, and C. Vivian Stringer at Rutgers. What’s one thing that you took from each of them?
CP: Just being mentally tough. Coach Stringer, she get a lot of kids that come from hard backgrounds – not saying that I did – people who grew up and didn’t have much, she gets those kinds of kids and makes them tougher. Same thing for Dorothy Gaters, she gets inner-city kids. If you look at her rate, in terms of kids graduating and going to college, it’s pretty high and successful, and she’s had a lot of players that go to college make it professionally, so it shows how, mentally, she prepares them.

LT: As a scoring guard, how do you balance looking to score with looking to distribute and get your teammates involved?
CP: Naturally, my position isn’t the one. I can just transform into the one if the coach needs me to.  I’m a scorer. I’m similar to D. Wade, he can play the point if he needs to. It really just depends on what the situation is and what the coach needs.

LT: The step back jumper has become your patented, go-to move. When did you develop it and start using it with such confidence?
CP: Probably when I was in high school, I guess. I was able to do it, but as I got older, when I went to college, you gotta work on these skills. I started developing it and getting confident with it, and it just became my patented move.

LT: Who did you watch while you were growing up?
CP: Everybody grew up on Jordan. In the 90’s that was the it thing. You had to have the flyest Jordans, his gear, everything. As a baller, you had to have it, so that’s probably one of the main influences on me growing up.