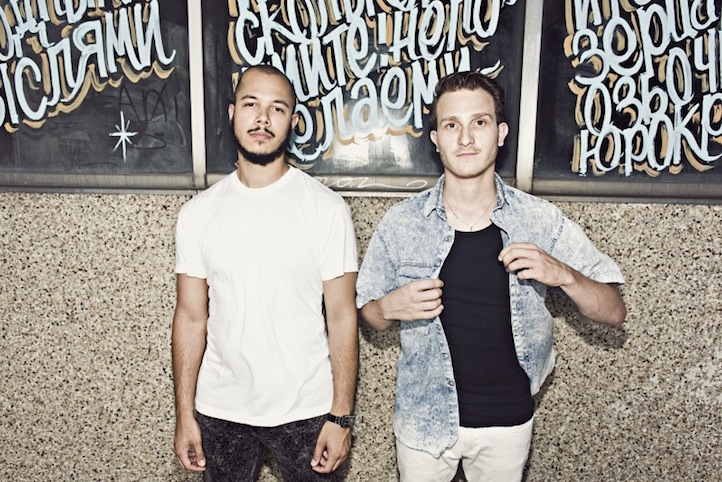 Since 2006, Chicago DJ collective Flosstradamus have made a name for themselves by blending hip-hop and dance music. The duo of Curt Cameruci (Autobot) and Josh Young (J2K), have taken the festival circuit by storm, playing everywhere from Lollapalooza to Coachella and causing a storm at this year’s SXSW. Here, Life+Times catches up with the DJ set to talk mash-ups and mentoring.

Life + Times:  I really enjoyed the mash-up you guys did with Twista and Sigur Rós ages ago. Do you guys have anything planned for the near future in the form of another mash-up?
Curt: We did this one, “Luuk Out Girl,” which is on our EP. We did another with Kreayshawn so, that would be the most recent mash-up we’ve done. We haven’t really been doing a lot of mash-ups lately. It’s more like original music and remixes.

L+T: I like the new album too.
Flosstradamus: Oh, thank you!

L+T: Are you guys doing a tour now that the new album is out? I know the last one was with Chromeo some time ago.
Josh: We are going to hit the road this summer. We haven’t announced anything really yet.

L+T: Unlike the other album, I noticed that with Total Recall you have a lot more electronica involved. What was your inspiration behind that?
Flosstradamus: If you go to Germany or Amsterdam, there’s just tons of really, really, heavy hard, fast, house music. It’s crazy because we have always played like Euro sound music with Southern hip-hop in our sets, but we never really put that together in our music. It’s crazy, because now there’s a whole scene around that; like araabMUZIK and other producers who are mixing drums with Euro samples. There’s actually like a fan base for it. We played a couple of tunes together and we were trying to just experiment a little bit. Then, we played for some people and they said it was pretty dope. We just kind of ran with it.

L+T: I love it! A lot of my friends and peers all love it.
Curt: Thank you so much! Honestly, me and this dude (Josh) have been doing this for eight years and we are just having fun. Anything we put out and anything we produce we try to have as much fun with it.

L+T: Ok, just a random question: How did you guys come up with the name, Flosstradamus?
Curt: It started out as a joke. We were just drinking with some buddies and that was it.

L+T: Nothing epic or deep about it?
Flosstradamus: No! (laughing) Everybody always wants some deep story, but no. We gotta make something up!

L+T: Do you guys feel like you had a mentor that kind of helped you along as DJs?
Josh: At different times, it was different people.
Curt: Well, a lot of scratch DJs. You know, we came up in the early 2000s…end of the ‘90s. At that time it was Mix Master Mike, Beastie Boys and Qbert and those kinds of dudes, so I think that’s what kind of got us started initially. Like when we actually started playing out and touring and doing shows together, Diplo, Z-Trip and A-Trak. Those guys were like the founding fathers for our scene. If I could say anyone, it would be those guys.

L+T: How did you guys meet?
Curt: We were living in the same city. I had a roommate at the time that was working at Whole Foods with this guy (Josh). So, I was looking to start a DJ duo and just wanted to have a DJ buddy that I could do parties with and he said (roommate), ‘why don’t you do it with my boy? He’s kind of making similar music as you and similar style.’ He put us in contact with each other and I came out to DJ at one of his nights and we clicked and that was it. As a DJ, you are such a solo artist. You can play what you want to play the entire night and have it your own way. So, to take that kind of mentality and make it work with a band or duo, it’s really difficult. We are fortunate that we work.

L+T: You guys have a dynamic bond. So, individually, what do you guys look forward to for 2012?
Curt: I’m gonna say I’m just looking forward to the new music we will be putting out. We have two EPs that have dropped in the past six months and I just want to make it happen again. He (Josh) and I are, well, we switched up our set. We used to use Serato, which is a DJ program, now we’re using Ableton with controllers, so we’re doing more live layering of songs. It’s still a DJ set for all intents and purposes. Our music mixed with other people’s music, we have more control over it and can do more with it.
Josh: So, I’m excited about that and like he said (Curt) staying in the studio and just putting out more music because that’s been more rewarding for us. We have been on the road for seven years, eight years and that’s great, but we’re getting older. So, it’s so much nicer to be in the studio, put out music and have kids be like ‘yo, we love this!’ and then tour a couple months out of the year as opposed to doing year round, because we would literally tour 365.

L+T: So, it’s about the music?
Floss: Yeah! It’s about making the music.