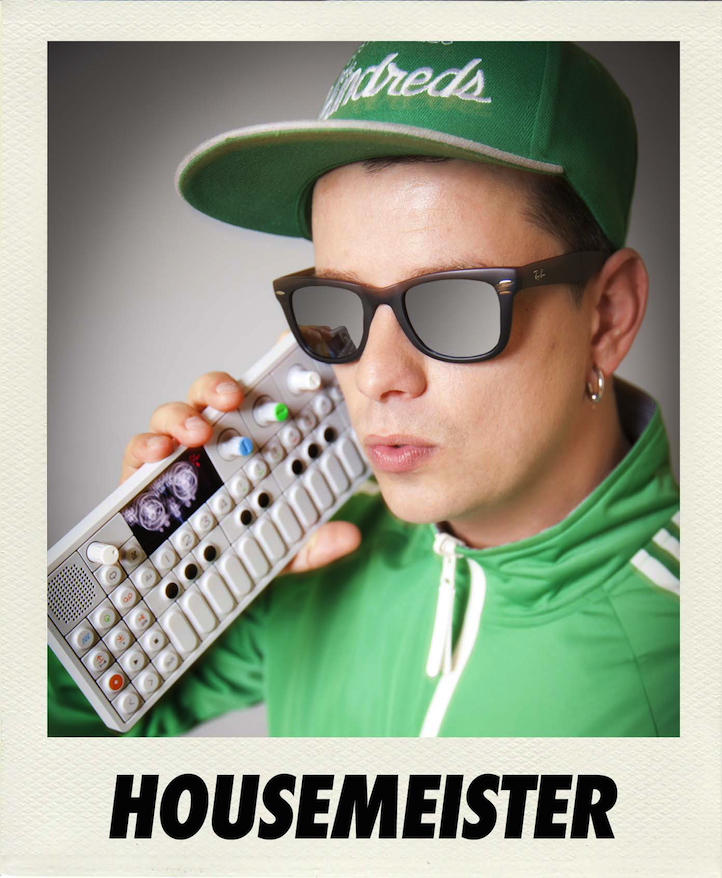 Imagine being given only one shade of red paint to use in order to create an abstract mural. Would it be impossible for the artwork to turn out subpar as a result of the use of only one color? That answer would be contingent on the artist. Berlin based DJ-producer, Housemeister, accomplished the aforesaid feat by creating an entire album by using only one tool: the OP-1. Last year, the compact all-in-one synthesizer, sampler, and controller traversed the world with Housemeister. This month, he unveiled the results of his travels with the OP-1 by the release of the album aptly named, OP-1 (via BoysNoize Records). Additionally, Housemeister currently runs his AYCB label and plans to drop at least one EP a month.

Life+Times: The song titles are the names of major cities worldwide. The various LFOs (low-frequency oscillators) and rhythm speed of the tracks fits each city – would you agree? Did you have this correlation in mind when you recorded the album?
Housemeister: It’s because I made the tracks in these cities in 2012 on tour with my little portable synthesizer which comes directly from the future, the OP-1. I [didn’t] really [make] this correlation in my mind, but maybe the city influenced me subliminally. I also recorded the local radio stations there, you know, there is a radio inside where you can sample from. It’s funny because you can sample the news or a song – and then you have it directly on the keys and play it and make crazy sequences. In the end, you would never recognize the original version, but it’s there. I mean, I was not like, “Okay, I´m in Paris, so I have to make something French.”

L+T: As you mentioned, this entire record was created using only the OP-1.   How long did it take to finish this album?
H: It took one and a half years to have the finished product. The recordings I made in about four months while on tour, then back home I showed them to my friend and the label boss Alex (Boys Noize). We selected the favorites from around 50 tracks to finish them later in my studio. The finishing was the hardest part, so thanks here to Boys Noize and Siriusmo. They helped me a lot and give me the power!

L+T: Was the idea of using an OP-1 on a record an idea you had in mind for a while?
H: Yes, since the release of this amazing pocket machine!

L+T: These tracks would be great remixed too. Alas, in 2010 you told Loving The Alien that you don’t like remixes. Why?
H: Remixing bores me and remixing is work. While jamming with my machines and the track evolve[s] with me, that’s more fun, you know? But there are some nice remixes in progress I can tell you about later. I´m also happy when people just make one and send it to me. Maybe we´ll release it at some point. They can send it to my website. Also, feel free to sample it, create something new with it – be creative! I would love to inspire you.

L+T: Will your collaborative record with Dave Tarrida be released via AYCB? Also, congrats on the re-launch. What’s next for the label?
H: Thanks! The Bubblecum EP is already released and it was working out very well, like, techno legend Dave Clarke has it on his charts at number two and plays it everywhere. Dave Tarrida and me – we already finished the next one, the Twerk That Shit EP. A very good release I had in June on my label was the amazing EP from my friend Jan Driver – check [out the] 1995 EP. My plans for AYCB are to release every month a Housemeister EP – sometimes with friends and sometimes from friends. So, follow me on Beatport and don’t miss that shit.

L+T: In the mid ‘90s you lived around the corner from Hard Wax Record Store in Berlin. Is this one of the portals that made you interested in techno? Initially, what aided in your attraction to produce dance music?
H: Sure, Hard Wax and Berlin’s clubs like E-Werk, Tresor, Walfisch, also the Love Parade, and Mayday. Techno was all over Berlin. I was DJing since ‘94, had a lot of residencies, and I met more and more other DJs. Then in ‘98 I was part of BPitch Control, a very famous label at this time with Modeselektor, Paul Kalkbrenner, Ellen Allien, and Toktok. So everybody around was producing. For sure I started to buy machines and synthesizers. I like to have fun with the machines like a little boy playing with his toys.

L+T: No doubt you have witnessed dance music’s evolution from vinyl to DAW (digital audio workstation) and so forth. What helps you to keep up with the times without jeopardizing your creative consistency?
H: I love new technology and right now I’m also DJing from CDs and even USB sticks. The good thing is I can record old vinyl that no one can find in digital. I still have 15,000 records at home, so I have enough stuff for the next ten years.

L+T: Is a DJ a musician?
H: Sometimes, but maybe today less and less. They are often just players, want the fame, having ghost producers, pressing sync buttons, and playing playlists in the same order.