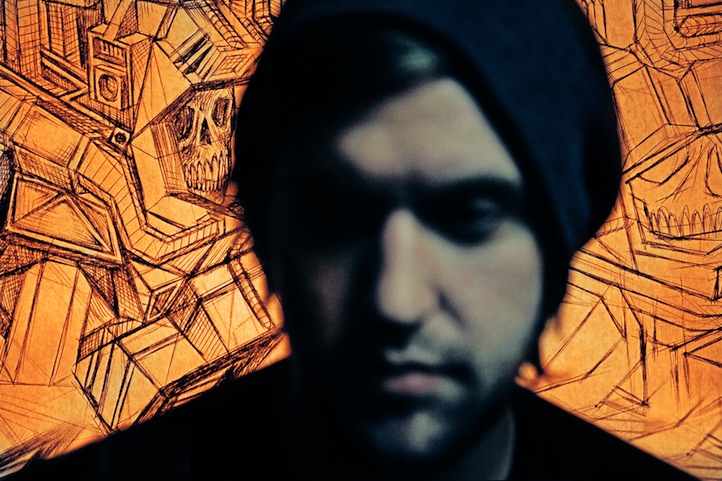 For Brian Lindgren, every moment can be archived. Recording as Mux Mool, the Minneapolis born producer/Brooklyn transplant has amassed a small fortune in samples, loops, and sound effects that have manifested themselves into several EPs, hits on Adult Swim, and several years after iTunes declared one of his songs the Best of its 2006 Electronic list, a debut LP, SKULLTASTE (Ghostly). Here, Lindgren delves into his digging style, how he got the name Mux Mool and his love of Super Mario Brothers.

Life + Times: What would you call your sound?
Mux Mool: I call it hip-hop or just plain beats. I understand that it falls into a few different genres therein, but that’s what I set out to do when I started, and that’s still what it feels like to me.

L+T: What was the first sampling instrument you ever bought?
MM: Roland SP-808 sampler sequencer. It was huge, it was red, and it was like 20 pounds. A few of my friends had ASR-10s, which I’ve used, and SP-404 a little. The first electronic music songs I ever made was actually in Acid 3.0 on a friends computer. I think I always knew that computers could do everything a sampler could do and quite a bit more. So, software was what I got into more heavily.

L+T: What’s the most prized record in your collection?
MM: That’s a tough call. The most important one would probably be the very first one, the one that got me into buying records, and I can’t even recall what that is anymore. I was never a collector of rare or famous records. I never wanted to dig for anything that anyone already had. To me the spirit of digging was in the discovery process and it doesn’t matter if every record is amazing. What matters is that you sat down and listened to music that you otherwise wouldn’t, and you learned. Basically, every one of those records was essential.

L+T: You’ve travled the country to build your album collection. Was there a place that you never wanted to leave?
MM: Actually, most of my collection was just built in Minneapolis. I was buying records, recording loops and cutting them up before I even had a way to re-arrange them. I would just record anything that I thought sounded cool, and then leave it on a drive. Now I dig through my old drives as well. I would say that the most inspirational digging spot I ever found was working at a place called Discount Video in Minneapolis. The owners had been in the video rental business forever, they were truly passionate about video rental, and rare movies and cult films. I used to take samples from movies with a friend who worked there. We’d come into work on each other’s shifts and just record stuff but only one of us was getting paid. I was really sad when the place shut down.

L+T: Describe your process.
MM: I would describe it as an “intolerable loop jam.” I never know what I’m gonna make when I sit down. I usually sit down, open up Ableton and just start listening to stuff until I hear something I like. Sometimes when I make songs, I don’t like them, and I’ll go through and find the parts that I do like and just save them as loops. So I have literally thousands of loops in different folders, all home made. It usually starts with just one simple loop. From there I just add parts, play keys, bass, synths whatever over it. Then you have to subtract from there. Some songs like “Night Court” come together real fast, I think that took me about three hours all together to make. Others like “Air Justins” took me about eight years of messing with the loops till I found the right feeling for it.

L+T: If you could have scored any video game, which would it have been?
MM: Oh man, video game music scores are truly genius. Yasunori Mitsuda and Nobuo Uematsu are amazing. It’s hard to gain legitimacy in electronic music, but imagine trying to do it for a video game 20 years ago. Everyone would think you’re just silly, but is there anyone in the world that DOESN’T know the Super Mario Brothers theme? If I could score any game it would be for any of this new breed of indie games. I would love to do some of that work. It’s tough to say all time though, maybe Toe Jam and Earl? Wipeout? Minecraft? Probably Minecraft.

L+T: Mux Mool is a name that you received from fans. What were some of the other options?
MM: Well at the time I think I only had about 400 Myspace friends, so the response was limited at best, I don’t recall any of the other suggestions and the messages are long since buried. Just before that I was thinking of going with the name Negative Dude, but when I read the name Mux Mool, I just thought it was perfect. The words didn’t mean anything to me, and it sounded like a name from a sci-fi novel or something.

L+T: With whom would you like to collaborate?
MM: I’d like to work with singers and rappers. When I started making beats that what I thought I’d be doing, I really had no idea that there was a whole world and scene for people to just play beats. Playing shows alone was pretty far off in my mind, but it’s an opportunity that came up and I pursued it. I have a hard time working with other producers sometimes, but I would really like to start making some tracks with my good friend and Ghostly mate, Shigeto. Oh, and if I could work with Method Man, yeah, I’d be way into that.

L+T: There’s something off-kilter about your music. How do you create these progressions?
MM: I don’t know if you mean rhythmically or stylistically, but I just make what sounds good to me. I draw inspirations from a lot of different places, it’s tough to put it all together into one thing or sound. I grew up in small Minnesota towns listening to my mother’s guitar playing, my dad’s reggae records, video game music, and a lot of Weird Al. And now I live in Brooklyn and I make beats, I mean, even saying that makes me wonder the same thing kinda.

L+T: When did you know that making this style of music was your calling?
MM: I didn’t ever know really, in some ways I still don’t know. I was doing it as a hobby when someone saw my Myspace page and wanted to put out a song. That song became one iTunes best electronic songs of 2006. That was my intro to this world I guess. In 2008, I think I really felt my purpose though. I felt like I was a life hobbyist, never committing to anything, just dabbling in everything, and I felt like if I was ever gonna do something with my life it had to be then, so I sold everything I owned, and moved to NYC with no contacts or friends or anything, just hoping that it would work out.

L+T: Where do you hear your music in five years?
MM: I’m hoping it’ll be all around. I’d like to make some solo songs that people will hear on the radio, but I’d like to produce for people for their projects, and get more songs on TV, and in video games, remixes, and score movies. Basically, in five years, I’d like everyone to be hearing Mux Mool whether they know it or not.