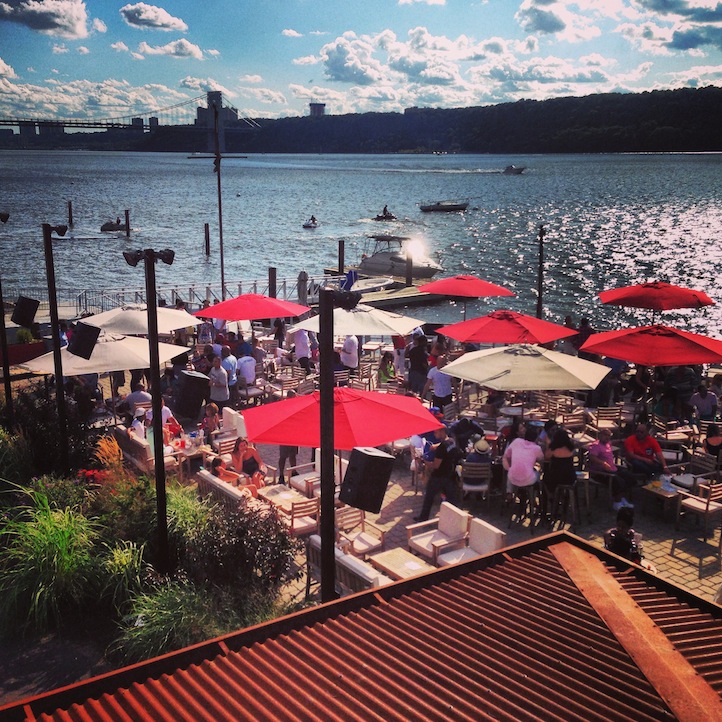 Certain New York City neighborhoods are just synonymous with nightlife. Until recently, a night on the town in the city that never sleeps would almost always include stops in areas like Chelsea, the Lower East Side, TriBeCa, or the Meatpacking District. But last summer, things began to change. One neighborhood, Dyckman, emerged as a new must-visit destination for late night fun and restaurant/outpost La Marina has everything to do with it. Since opening in 2012, US Weekly’s pick for NYC’s top celebrity-loved restaurant has quickly become a magnet for not only celebrities, but also for events like Brunch Bounce and basically anyone looking for great food, great scenery and an all around great time. The beach resort design and the waterfront view have been a welcomed escape from what’s typically found in the city. Jerald Tenenbaum of the Manhattan River Group, which owns La Marina was kind enough to take some time out of his busy schedule to speak with Life+Times. Here, he tells us why La Marina isn’t a “manufactured hotspot,” how he and his partners are working closely with local officials to solve Dyckman’s traffic problems, and which dishes first-time visitors to La Marina must try.

Life + Times: What as it about La Marina’s location that made it feel like a perfect fit?
Jerald Tenenbaum: It was the panorama and the space that drew us in. The concept came much later. We first came to La Marina by boat ten years ago. At that time there was a Tiki hut, plastic lawn chairs, a bunch of old boats and the occasional Reggaeton act that blew out the neighborhood. It was a neighborhood spot that was mostly unsafe after dark. When we imagined what La Marina would be we did not plan on creating a hotspot. We didn’t do the things that manufactured hotspots do. There was no celebrity partner or a budget for bringing A-listers up to La Marina to party, but we knew that it would catch on over time. We have a beautiful spot, great food and an impressive line of talent to keep people entertained. New Yorkers work hard and we all are always looking for new ways to enjoy ourselves when we have down time.

L+T: There aren’t many “hotspots” north of Harlem. Did that cause you and your partners to be somewhat hesitant when choosing Dyckman as the neighborhood for La Marina?
JT: When we first began to think about a restaurant and lounge so far Uptown and so far out of the way we knew that people would be drawn in by the vibe of the place. The obvious challenge was to spread the word that Manhattan is much more than the Lower East Side, The Village, TriBeCa, Meatpacking, etc. Marcus Samuelsson led the way with Red Rooster in Harlem. NYC & Co is promoting the South Bronx as a tourist attraction and [the play] In the Heights was even a hit on Broadway. Upper Manhattan is now on the map, which makes it possible for a place like La Marina to thrive. The view is the one thing we can’t take credit for. Our job is to offer people a great experience.

L+T: La Mariana is a part of [former] Mayor Bloomberg’s Waterfront Action Agenda, which encourages development along New York City’s waterfront. How did that partnership come together?
JT: We were three years into this project when Bloomberg came up with the Waterfront Action Agenda. We found out that we were a part of it after it was released. The Parks Department – our landlord – has been very supportive of what we are doing and not only because we generate revenue for the city, but because we gave new life to a once derelict drug den and boat graveyard. In addition to the Waterfront Plan, the Parks Department is building two new bicycle paths that run right next to La Marina. One of them is part of the Manhattan Waterfront Greenway project that follows the shoreline for more than 20 miles.

L+T: Was the beach resort design an idea architect Andrew Franz brought to the table?
JT: La Marina would not be what it is without Andrew’s massive talent, creativity and purity of vision. Like most development projects, there were lofty designs that had to be scaled back, owner concepts that were unworkable and plain differences of opinion. Since we respect and trust Andrew, we would sometimes just turn decisions over to him with the instructions “make it work” and he always did. We all agreed that La Marina had to fit into the landscape rather than dominate it. We intentionally used materials that had patina and felt aged and weathered. Also, Andrew was not our first architect and the design that you see today was not our original design. We actually broke ground on another design, but had to stop work after one of our engineers discovered that we were building over a sewer line, which is not allowed in NYC. A single manhole buried under a foot of soil delayed us by more than a year and caused us to redesign the entire project. I had asked Andrew to take on this project the first time. He refused, but the second time around we were able to convince him.

L+T: Though La Marina has received much support, it has also garnered some backlash, mostly noise and traffic complaints. What steps have you taken to curb some of those complaints?
JT: The traffic pattern on Dyckman Street is really messed up. It was not designed to handle the number of vehicles coming into the area. In addition to La Marina, there are now a number of spots on and around Dyckman that are drawing crowds, which leads to traffic. We are actively participating in a task force established by some local politicians to come up with solutions to the traffic problems. We are sitting down with the Department of Transportation, Metropolitan Transit Authority, community organizers, parks and others. It’s a productive process.

L+T: In your opinion, why has La Marina been such a success?
JT: La Marina is successful because we built a place that people can appreciate. If it were just the view and a Tiki hut we would be successful in a different way, but not in a way that we could be proud of. We gambled big that if we did more than we had to – if we created a venue that matched the view – people would come and they have. It has been a mantra of our group from the start that we had to offer an unexpectedly great experience. This continues to be our goal.

L+T: What dish would you suggest for someone visiting La Marina for the first time?
JT: The Chicken Lollipops and Tuna Tartar are favorites of mine. We are in the process of updating our menu and this Fall will bring a whole new concept, so ask me again in two months. My favorite cocktail is by far the Donq Frozen Mango.