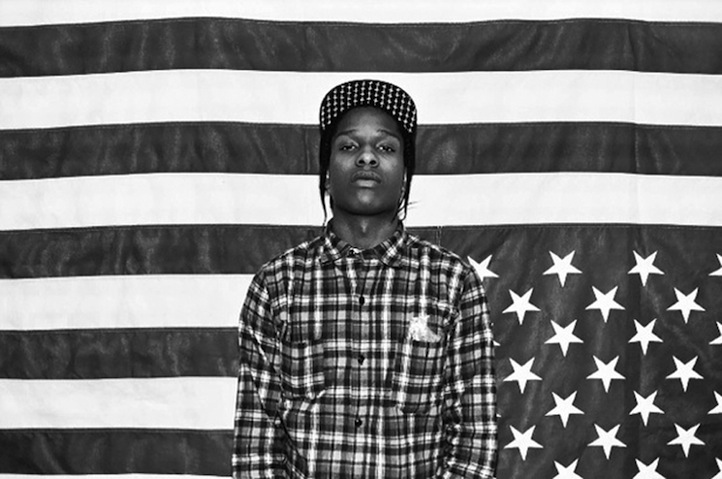 Days before the Halloween release of his Live.LoveA$AP mixtape, Rakim “A$AP Rocky” Mayers sat distracted in the sparsely furnished mid-Manhattan offices of Polo Grounds Music. It was the 23-year-old Harlem rapper’s first big press day since signing a deal worth $3 million with PGM, a subsidiary of RCA/Sony, earlier that month and back-to-back interviews had taken a toll on his attention span. After hours of being quizzed about his southern-inflected sound, his fashion sense and his non-beef with Odd Future, he was cordial, but not completely engaged. His eyes darted from the mounted flat screen TV playing 106 & Park to his iPhone, to his laptop as he sipped a Hennessy-spiked fruit smoothie and explained the acronym that precedes his name and those of his crew members: “A$AP means ‘Always Strive and Prosper.’” Then for a moment, he zoned out, lost in the glow of his Macbook. “I’m sorry,” he said as he snapped out his momentary daze. “Let me not look at hot chicks on Facebook while I talk to you.” Trolling the Internet for future conquests is one of his favorite pastimes. “I’m a predator on Facebook,” he quipped, grinning through gold teeth. “I go in, I don’t fuck around.”

No, he doesn’t—especially when it comes to women. Charismatic and cocky, Rocky had already worked his magic on a female writer from an alt/indie blog earlier that evening. He regaled with talk of his newfound vegetarianism, a renunciation of homophobia and his knowledge of high-end designers and then he exchanged phone numbers with her—all in a day’s work for this self-proclaimed “pretty motherfucker.”

Rocky is as Web savvy as he is girl crazy. In fact, much of his seemingly overnight success can be attributed to how well he’s worked the ‘Net. Before he was getting written up in The New York Times and being featured in MTV2 video segments, Rocky seeded his music through “Real Nigga Tumblr,” a street rap nostalgia blog run by his cohort, A$AP Yams.

The blog paid homage to hardcore hip-hop from NY, the Midwest, the South and California; laying bare the blueprint for Rocky’s sound, an amalgam of hip-hop from those regions. “Real Nigga Tumblr was popular, you could just secretly throw some A$AP shit on there,” he explained. ”Like, ‘OK , I see some Mobb Deep old shit, I see some old Harlem World shit, I see some old fuckin’ Project Pat shit. [Who’s this] A$AP Rocky? Lemme click this … ‘” And then there are his videos— all of which he co-directs. A$AP Rocky prides himself on provocative visuals that buck the trend of flashy jewelry, expensive cars and gyrating half-naked women in rap videos. “When I make my videos I don’t want them to look like your average music hip-hop video. Look at this,” nodding at the Meek Mill “I’m A Boss” video playing on the TV. “Honestly what’s the difference between [this one and others that feature] ice, cars … [the] only thing missing is the bitches.”

And then, right on cue, the video cuts to a shot of women.

Though well-executed, Rocky’s clips for “Purple Swag” and “Peso” are actually replete with rap video clichés—just not current ones. Rocky isn’t the first rapper to ride on the handle bars of a friend’s bike or drink 40s or to take part in a dice game or to have “shirtless-with gold-teeth” performance shots in a video—he’s just one of the few doing these things in 2011. Like his music his videos are heavily influenced by the imagery and aesthetic of yesterday’s rap. “I’m really passionate about directin’, I want to get hired to direct people’s videos,” he said of his aspirations behind the camera. “They gonna respect me like ‘Nigga Tarantino,’ that’s gonna be my name.”

Whether “Nigga Tarantino” will become a household name remains to be seen, but it’s a safe bet that A$AP Rocky, the young Harlem nostalgist disguised as a futurist, will.