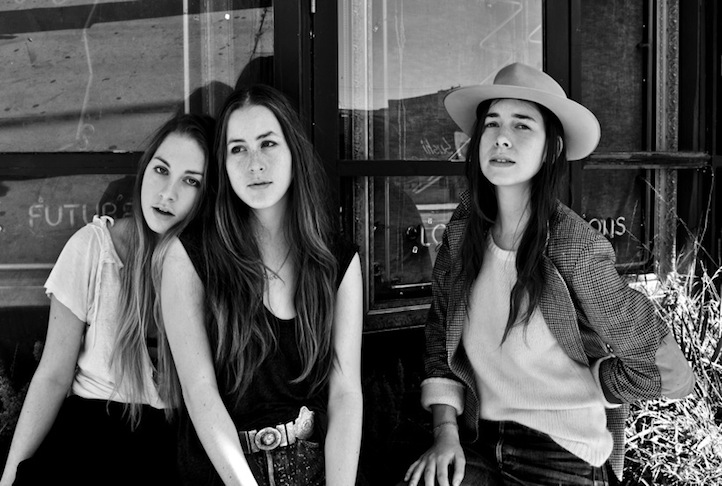 Things couldn’t be going any smoother or faster for Roc Nation’s singing sweethearts, HAIM. The LA-based sisters and bandmates Alana, Este, and Danielle Haim have made their mark in the music industry since 2006. However, their rise to fame was kicked up a notch in 2012 as a result of their Forever EP. They just wowed the country with their live Letterman performance last week, performed in front of a packed out crowd at the Governors Ball NYC Music Festival last weekend, and are slated to release their debut album at the end of the summer. Life+Times take a peek into the world of HAIM through the eyes of baby Haim, Alana.

Life+Times: I hate I didn’t get a chance to see you guys at Governors Ball, but I’ll see you at Budweiser Made in America!
Alana Haim: Oh my gosh! I am so excited for that festival!

L+T: Is there a particular artist that you’re looking forward to checking out while you’re there?
AH: I mean, let’s just talk about…isn’t Beyoncé playing?

L+T: Of course!
AH: She’s, like, my number one obsession. We literally just did this Chime for Change benefit with Beyoncé and I literally cried for the whole day – even, like, the happy songs. I’m never a crier. I do not cry. I consider myself a dude. I literally do not feel womanly most of the time. There’s something about Beyoncé that literally brings me to tears. I don’t know what it is. You will see me at Made in America. I will be the crazy girl crying.

L+T: I will look out for that. So, I know you three went on tour with Rihanna overseas. Do you have any crazy memorable experiences from that tour?
AH: Oh my god, I wish! It was kind of crazy. We only did one show with her because we had to come back to America really quickly and do some stuff here. I’ve always been the biggest Rihanna fan. I think she is such an amazingly powerful woman and is so badass. The one adjective everyone thinks about when they think about Rihanna is badass. Everyone in her crew is just so nice. We didn’t get to do any crazy things; maybe in the future, I hope. I just got a couple of pieces from her River Island Collection and I secretly envision that I hope when I put it on and I wake up like her – but, it’s never happened.

L+T: It hasn’t happened YET. 2012 was crazy – you released the Forever EP, landed a record deal, and the list of achievements could go on. When is the debut album being released?
AH: It’s being released late summer. Our deadline is coming in the next couple of days. If I could put it out tomorrow, I would leak it. I literally would just leak it. I would put it out and play the new songs live. We have a bunch of new songs on the record. We’re just so excited to play them live. It’s almost there. It’s coming.

L+T: Does it have a name?
AH: It’s a secret. We love keeping secrets in this family. Everything else in this band is not a secret. I don’t know if you heard, but Este gave out her telephone number to, like, the world. Este’s number is on YouTube,  literally now. We are literally open book in this family, except for our record. That’s the one thing that we are keeping a secret.

L+T: Any guest artist collaborations on the album?
AH: I think it was more collaborating with our producer. We wrote a couple of songs in the studio which we had never done before. We kind of went in with already a huge repertoire. One day, we were with one of our producers named James Ford and he brought in this really hot track that we kind of liked and fucked around with. We end up writing this whole new song in the studio. We kind of just went out of our comfort zone with a couple of these songs.

L+T: When you say, “out of our comfort zone,” do you mean sound wise or from a lyrics perspective?
AH: I don’t know if you know the back history of our band, but we’ve been a band for six years going on seven years. We tried recording so many times and it just never sounded good until we released our first EP – that was the Forever EP. To this day, we have studio anxiety. We can play 30 million shows, you can keep me on stage and I’ll play until my fingers bleed, but the second you put me in a studio – it’s really intimidating. You’re on a clock, there’s only so much time you have to sit down and make decisions and you don’t know if you’re making the right decisions. There’s a wall you hit at a certain time everything either sounds really slow or really fast…it’s an intimidating process. I think with this record, thankfully, we’ve found two producers that really helped us through, that really calmed us down and kept the morale going. There was a point where all three of us were like, “Oh my gosh! Let’s just throw this whole record in the pool and give up music forever.” They were like, “Okay, relax. Bring it back. You’re fine.” I think it was more like the people that we worked with really helped us through everything. It was a huge collaborative process between us and the people that we worked with.

L+T: I know you can only speak for yourself because Este and Danielle are not around. Growing up together and obviously being a band for over six years, what would you say you have learned creatively from your two sisters through the process of this whole album?
AH: I learn so many things through my sisters every day. When I say they’re my favorite musicians, I’m not trying to be corny. I literally look up to my sisters more than anything. They’ve taught me so much. Me being the littlest sister, I was lucky enough to see my sisters grow up and take things that I love from both of their lives. They really were the best role models. So, I think it was just really amazing to see them working in the studio and we were all working at the same time. There were times when I would watch my sisters play and be like, “Wow. I’m not fucking around – you guys are actually really good.” There were times when I was like, “Holy shit! I have the same blood as these people.” It’s so nice to just not have to worry about music when you’re in a band. There are some times when you’re like, “I can’t do this. We’re not gelling.” I’ve seen so many bands growing up and it was just so frustrating because it just wouldn’t be like playing with my sisters. We all have this weird sister ESP thing, we think alike; we always have the same instinct when it comes to certain parts of a song. It’s so insane to be in a band with good musicians and we share the same blood. Sometimes it brings me to tears. I’m so happy now that we get to travel together and tour together. This is what we always wanted growing up. We’re just lucky enough that we get to do it.