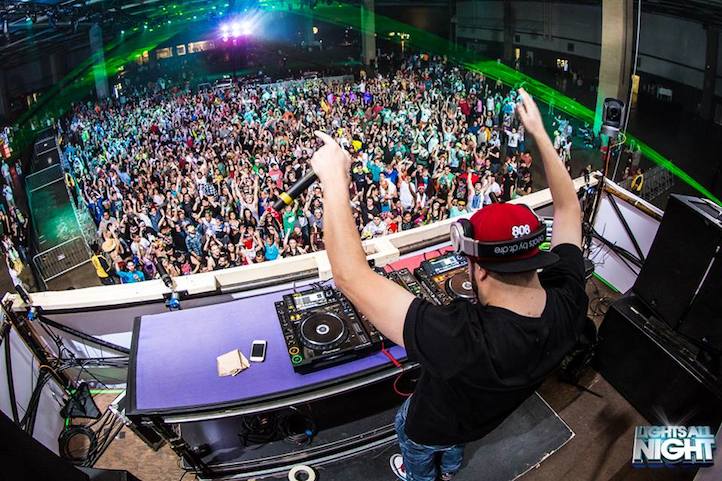 The ability (or inability) to progress with the times is what separates a game-changer from a status quo artist. “We’re in a different era musically. There needs to be new ground broken,” iconic DJ-producer Green Lantern says. He’s the poster boy of music’s past, present, and future that goes well beyond his hip hop beginnings and bleeds into EDM’s concoction of genres. GL’s Lights All Night performance in Dallas last Friday attests to this fact. The neon clad army of festival attendees flock to the Boombox stage in droves as GL unleashes a steady stream of remixes and original tracks ranging from trap to electro house. His set is much more than the run-of-the-mill live show you’d expect. His inclusion of new age technology and turntablism demands the attention of the LAN audience from start to finish.

Post set, GL goes on to talk about the polarization currently taking place in all facets of the music industry. Playing by the rules will get you left in the dust of trailblazers – whether you love or hate the artist. “He professionally doesn’t give no fuck. He knows he’s gonna get flack and people are gonna talk about him – but he can back it up musically,” GL says regarding Kanye West and his creative whims. We go on to discuss the unconventional manner in which Magna Carta… Holy Grail was released, the untraditional Flosstradamus Banned 3D release on a vape pen, and the electronic infused Yeezus. Not go without mention in the list of unprecedented records conversation is GL’s recent collaboration with producer Valentino Kahn and rapper Iggy Azalea on “Know About Me.” Going into 2014, GL announces he will drop records featuring Paper Diamond, 2 Chainz, Riff Raff, A$AP Rocky, just to whet the listener’s appetite for more. “The enemy in all of this is indifference. If [people] are indifferent and just don’t give a fuck, then you got problems,” GL adds. Based off of his nonconformity and signature production skills, indifference from a listener is not an option. 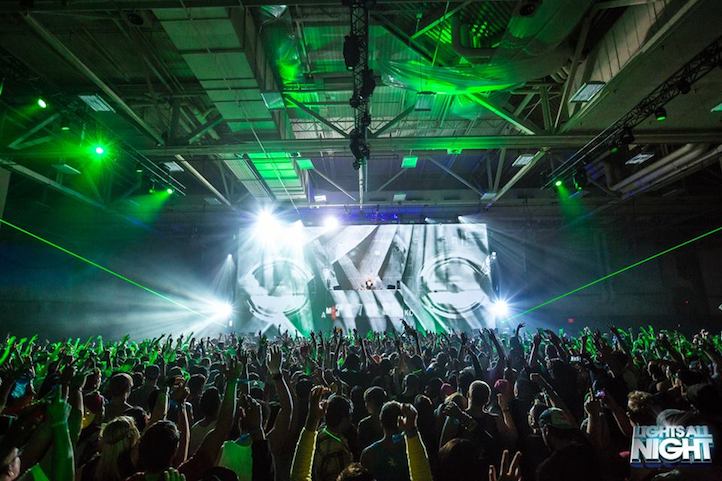 Life+Times: The last time we spoke, it was on the heels of your Altitude mix release.
DJ Green Lantern: Man, that was a year ago!

L+T: Right! A lot has changed since then – tons of releases and tours. Your latest collab with Valentino Kahn and Iggy Azalea is ridiculous. How did that come about?
DJGL: I have a deal through Ultra to put out a couple of records that are electronic, but rap elements to them. I had this song and Iggy Azalea gave me some vocals and I built a song around it. I had a version of it and I had Valentino mix it. We ended up not wanting to use that version. So, I made a whole other version and then brought him in as a co-writer – a production partner on it. He ended up doing the final mixing on it. He made the first drop on it, added a whole bunch of synths to it, and brought it to life. He’s dope. I love Valentino.

L+T: He’s a cool guy.
DJGL: Yeah, he’s definitely a cool guy. We have the same management, so we know each other personally.

L+T: That was actually my next question as to how you all are connected – Iggy, Valentino, and you?
DJGL: Obviously, I know Iggy from the rap world. I’m familiar with Valentino because we have the same management. My ear is to the street. I know a whole lot of these guys.

L+T: I know! I’m noticing that more and more in your mixes and new records. Not to ask the generic question – but it’s necessary – what’s new going into 2014? I’d rather bypass the release hearsay and just go straight to the source.
DJGL: Just having fun with music and having an open mind in trying to be evolutionary. I’m trying to evolve my sound. How people call 100 [BPM] twerk, for example. I think 100 is way bigger than a specific vibe of twerk. I think 100 is bigger than, “Girl, shake that ass/Girl, girl, shake that ass.” It can be really musical or go all these different places. So, that’s what I mean by evolutionary. I’d like to add my little spice to the pot of a lot of different waves. So, that’s one thing. That’s manifesting in records that I’m just throwing out and records that are planned releases through labels – just a combination of the two; and having fun playing music on the road – being able to just go from playing an edit of Daft Punk to Rich Homie Quan and then make it work. You gotta make that work. That’s where I think my experience comes in of being a DJ is knowing how to transition smoothly.

L+T: I like what you’re doing. About two weeks ago you dropped “Here We Go Again.” Though it starts out as a trap track, the kicks become a lot more rapid as the song progresses. Hence, you can’t really call it a “trap” track. That also made me think of a recent conversation I had with Paper Diamond about producers being pigeonholed into one genre. What helps you to be motivated to step outside a particular genre? If people say, “Green is a trap producer” – how do you combat that?
DJGL: Well, I’ll say this – even if you only want to make trap, twerk, house, or whatever it is and you only want to make that and you only do that, when that goes away, you are gonna go away. (Laughs) I personally don’t have that problem because I don’t only want to make one thing. So, that’s not my issue. I know a lot of people that do and are only known for one thing. This is a big room house guy, this guy’s a twerk guy, [and] this guy’s a trap guy. When those genres collapse, you go with it! Then, you’re over here trying to make a new alias. What I suggest you do is while you’re hot doing your thing – you can be the twerk guy on top of the world – make a house song while you’re on top. So, when that genre that you’re the king of goes away, you’re not ball-and-chained to that – because these things move around.

L+T: They do, i.e. disco…
DJGL: For real! What I’ve learned this whole year is you can do whatever you want. You can do absolutely anything you want as long as you have a good energy to it. Let’s say for example someone just creating moombahton one day. How does that even happen? Because it had some good ass energy and people took to it. The same with twerk for example. It’s trap at 100 [BPM]. It’s just an example of if you make it, if you build it, they will come – you know that saying. If you make some good shit, people are gonna react to it.

L+T: That’s true. However, the audience is so fickle. At the beginning of this year, trap was the height of its popularity. Depending on where you play, it still is popular. How do you as an artist know how to cater to your audience – even if something isn’t considered hot anymore?
DJGL: You don’t cater to your audience.

L+T: You don’t? What if they hate you?
DJGL: (Laughs) You’re not a real artist unless you piss your fans off by doing what you really want to do. There’s your cool quote right there. You’re not a real artist until your fans are complaining because you went outside the box that they see you in. I see friends of mine that are primarily trap guys making hardstyle and big room house records. I see their fans going, “Yo, what the fuck? What are you doing? This is trash. You’re better than this.” They’re like, “I’m just expanding. I made other shit before trap.” That person obviously made different shit before last year. So, don’t expect me to make just this one thing that you know me for. If you’re a real artist, you’re evolutionary in your sound and you’re just gonna keep moving and going. This is to the fans: Don’t put people in a box. When I woke up one day and I saw [the] DJ Premier remix of a Disclosure song – the idea of that – I was like, “Yes! HALLELUJER!”

L+T: It definitely caught me off guard.
DJGL: Yes, that’s so beautiful. That’s supposed to happen. We need that to happen more. I’m sure there was somebody out there that was like, “Ah, man! What’s he doing?” He’s looking at you like, “I’m a fucking musical entity. I’ll do what the fuck I want to do.” You’re always gonna piss people off – even the people that are your fans. Like I said, if you don’t do that – if you only cater to them – you’re not a real artist.