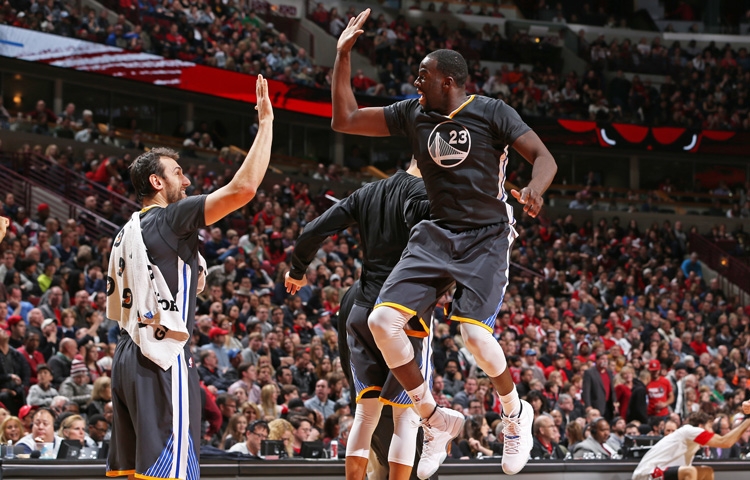 Stephen Curry and Klay Thompson are arguably the best backcourt in the NBA right now, and perhaps the best shooting backcourt in the history of the league. Accordingly, they garner much of the attention directed toward the Golden State Warriors who tout the best record in the league at 18-2 and are currently amidst a franchise-record 13-game win streak.

It’s the supporting cast, however – Draymond Green, Harrison Barnes, Andre Igoudala, Shaun Livingston and Marreese Speights, in particular – who have made Golden State one of the deepest and most versatile teams in the league, and deserve much of the credit for the recent success. Case in point: a December 6th 112-102 road win against the Bulls, in which Curry and Thompson combined to shoot just 3-for-13 from deep, but Green finished with a career-high 31 points and seven 3’s.

A year ago, Green was coming off the bench as an energetic sixth man for the Warriors. This season, he’s started every game and is averaging career-highs in minutes and nearly every other statistical category, including 13.5 points per game.

“That’s who he is,” first-year Warriors head coach Steve Kerr said of Green. “He’s just a winner and he’s given us a new dimension with his three-point shooting…When you can pick-and-pop with your four-man, it just spreads the floor.” Former head coach Mark Jackson deserves some credit for righting the ship. Kerr stepped into an optimal situation and has kept the Warriors’ ascent on target.

“I knew we had a good team,” said Kerr. “This team won 51 games a year ago. They’ve been good for a couple years. The foundation was laid in the last several years by the entire organization, coaching staff, the players, they’ve had the ball rolling. My thought coming in was, ‘I know we’re gonna be good, but let’s try to get a little better.’ I think our guys have been outstanding, they play both ends, they pull for each, it’s a very fun group to coach.” The Warriors are a top five team everywhere it matters most: points per game, field goal percentage, 3-points field goals made, assists, defensive rebounding and opponent field goal percentage.

“I love this team,” Kerr continued. “These guys just compete. I think they’ve figured out that defensively we’re very good, so if we just take care of the ball and defend every night, then we’ve got a chance to win and that’s been a constant during this streak…As long as we take cares of the ball and defend, we know we’re skilled enough to find somebody to make some shots.” 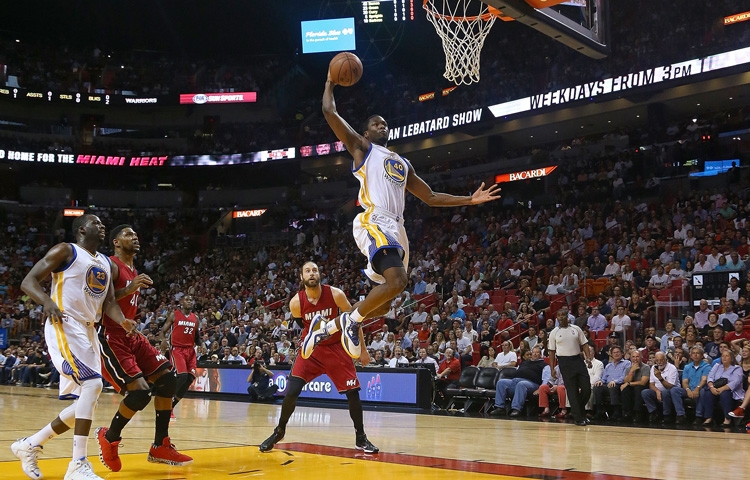 Along with Green, Speights and Barnes are also having the best years of their careers. Barnes has started every game and averaging a career-best 11.6 points, while Speights’ 12.3 points and 54 percent shooting are bests for him also. They’re all aware of whose team it is, but equally cognizant of the importance of their own supporting roles.”

“We understand who’s team [it is] and that Steph and Klay are probably going to get a lot of the publicity, but we don’t care about none of that,” said Speights. “We just go out every night and play hard knowing that they’re going to get the shots and we’re gonna be the guys to clean up. It’s good that they get all the attention because on any night, the other guys can come up big.”

“At the beginning of the year it kind of started off slow. I wasn’t getting the minutes or I was getting DNPs, but coach still believed in me and I’m just blessed with the opportunity to come off the bench and produce on this team.

Barnes added: “Right now, my job is to go out there and defend and rebound. Obviously, Steph and Klay get it going and knock down open shots. We got a nice win streak going right now, so right now everyone is flowing. Whether I’m starting or coming off the bench, playing backup four in the second unit, whatever it takes to win.”

“We knew there was going to be a transition period having a new coach, but I don’t think any of us could have dreamed – Mo having a great year, Draymond having a great year, myself rebounding from last year. It’s just been fun. The biggest thing is we’re just trying to play team ball, we know if we make the extra pass it’s going to come back to you eventually and everyone is buying in on the defensive end.” On the flipside is all-star and Olympic gold medalist Andre Igoudala, a 10-year veteran averaging career-lows in minutes (27.3) and points (6.7). Last year, he started every game he played in. This year, for the good of the team, he’s coming off the bench, maturely realizing the bigger picture.

“It’s just about playing ball at the end of the day, not trying to think about anything that’s not for the team,” he said. “People can get selfish, it’s human nature, but [I] put the same work in and prepare the same way. We have so much firepower on this team, you never know, any night could be your night. I’m always being ready at any given time. I’m just looking forward to staying in a good mindframe night-in, night-out. Some nights you can get frustrated – it’s natural human feelings – but seeing the bigger picture, that’s what it’s all about.”

Stars and elite scorers will always get much of the attention and rightfully so, but a potent supporting cast, team chemistry and player buy-in – the kinds that exist in Golden State – are the difference between having a good team and great one.