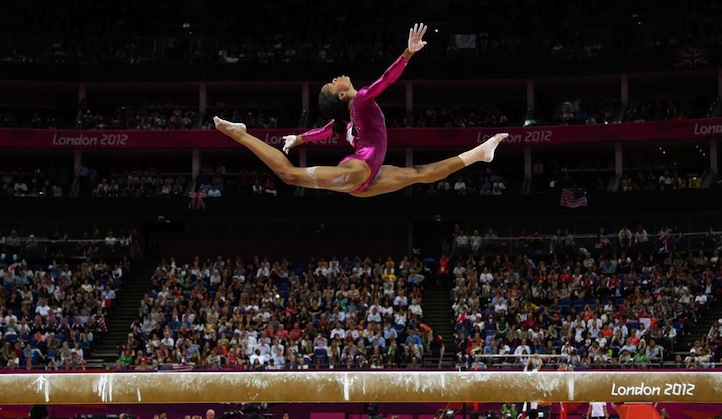 At the 1996 Summer Olympics in Atlanta, 20-year-old Dominique Dawes became the first African-American to win an individual Olympic medal in artistic gymnastics and the first Black person of any gender or nationality to win an Olympic gold medal in gymnastics. A remarkable feat that has etched her name not only in the tablet of Olympic history but also the book of African-American firsts.

Gabby Douglas was only six months old when Dawes made history. Little did her parents know then that their baby would also make history by the time she was able to drive. 16-year-old Douglas has gone from an “average-good gymnast,” according to national team coordinator Martha Karolyi, to accomplishing yet another African-American first: the first African-American to win the all-around title in gymnastics. As only the second female African-American U.S. gymnast to ever make the team, Douglas took what Dawes did before her and one upped it as she snared the gold medal – her second thus far – at the 2012 Summer Olympics in London.

She’s been showered with accolades and congratulations from the most esteemed figures in the country for being only the fourth American to ever win the gold in that event. Her face was on the front of every website from ESPN to CNN and everything in between.

You would think that people within her own community would share in the praise for the teenager that has not only made her people, but also her country proud. But here we are discussing… her hair?

The focus of the conversation is Douglas’ hair and the negative backlash she has received on social media. A number of tweets were reeled in where the high school girl is getting slammed for her hair not being done on national television. Surprisingly, most of the negative comments are coming from African-American women. And apparently, the timing was right for an article on African-Americans being critical of another African- American to appear on the front page, right when Douglas should be praised for her stellar accomplishment.

This is irresponsible on so many levels.

To think that a major website (Yahoo!) would trivialize Douglas and her accomplishment with a lead story about her hair is deplorable. We see numerous nonsensical stories on various mediums on a daily basis. But this simply did not have to be on the front page at this particular time, nor did it need the headline it was saddled with. Especially when you consider what Douglas has just achieved not only for her community, but her country. Granted, the article was in defense of Douglas and her hair but the sensationalism sprawled across the homepage had already done its damage.

Is Douglas’ hair really sparking a “raging debate?” Are that many people offended that a gymnast – who flips and sweats for a living – may have sweated out her perm in an effort to win a gold medal? Is it really important to have this discussion right here and now?

But not nearly as ridiculous as those who actually took part in the slander. It wasn’t as if Yahoo pulled the story out of thin air. Tweets and Facebook posts coming from African-American women suggesting that the young gymnast needed to “represent” and get her “gel and a brush” are clearly in the wrong.  Did we forget that Douglas is in a world athletic competition? Ms. Douglas isn’t runway modeling or playing the love interest in a movie where her job is to look stunning. Her job is to win an Olympic gold medal in an event where it is expected that she sweat.

A tweet stated that “she has to represent.” I’m sorry, I suppose that being only the second African American woman to make the national team isn’t doing enough to represent. You know, because if she has her hair done and loses, it’s a better reflection of the African-American community than if she sweats it out and wins. The obsession with hair is problematic and undermines what we, as a community, value. If we spent less time criticizing one another and put that energy into those who are trailblazing, we won’t have to worry about Yahoo! generating a story that focuses on African-Americans being critical of other African-Americans on the grandest world stage of them all.

We live under the microscope where every misstep is magnified and under the constant fire from mainstream media that is often critical of our culture. Rather than belittle those who are trailblazing for future generations, we should do our best to support, defend and encourage young women like Gabby Douglas.