Three years ago, four of college basketball’s top teams put together the State Farm Champions Classic. An annual early season showcase, they could not have drawn it up any better than this season’s edition. Number one Kentucky versus number two Michigan Statein the first game, and Number four Duke vs. Number five Kansas in the second, is a lineup typically reserved for March.

“It’s a great event,” Duke coach Mike Krzyzewski said. “You’re part of a double-header with three other unbelievable, storied programs in our country for basketball with a sellout crowd. It’s a great way to start the season.”

On top of the teams’ rankings – including the Final Four – will likely feature as much individual talent as the United Center did Tuesday in Chicago, which looked like a pre-draft combine. Freshmen Andrew Wiggins, Jabari Parker, Julius Randle and James Young, plus Gary Harris and Adreian Payne – all potential lottery picks in the 2014 NBA draft – were all in action. The Champions Classic brought out more than 60 NBA scouts, so while guys were playing for team wins first, respect, draft position and money were all on the line, as well.

In the first game, Michigan St. topped Kentucky 78-74. Most eyes were on Kentucky who boasts what many consider the best freshmen class ever, with six Top 50 prospects. However, the inexperience was apparent and is what cost them the game. “This kind of tournament is great for college basketball. It is terrific for the teams. It’s just tough for a really young team,” Kentucky coach John Calipari said, admitting that he expected his team to struggle like they did. The Wildcats never led and trailed by as many as 15, though they made a strong run in the second half to tie it up. 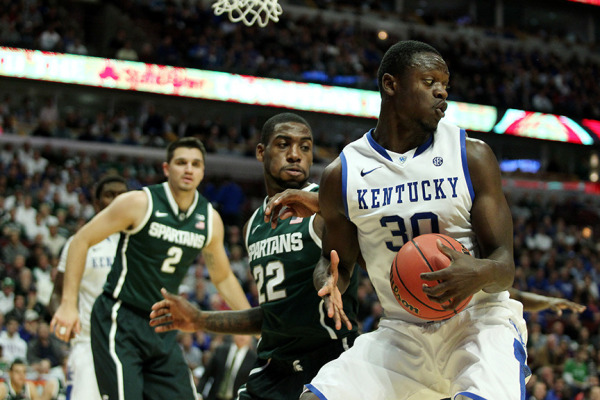 Randle finished with 27 points (23 in the second half) and 13 rebounds in the loss and showed great ability to play around the rim, but was part of a team-wide struggle in decision making and handling the adversity. Young got hot in the first half and finished with 19 points but shot just 3-for-11 from three and 2-for-5 from the free throw line.

“They’ve never been in an environment like this. One and two, when guys get that, they get into themselves. It’s natural, so now everybody’s trying to do their thing and it looks discombobulated,” Calipari said. “Instead of [making] that one extra pass, we held the ball. Julius had eight turnovers for one reason: he held the ball. Then he tried to go against five guys, you can’t play basketball that way. The ball moves and then you attack. If the ball doesn’t move, so you hold it and then attack, you’re attacking five guys. We had guys crying in there, which is a good thing. I want it to hurt like that. The biggest thing is, if you don’t do this together, you will not win. You will never be a special team. You’ve gotta truly do this together and that’s both on defense and offense.”

Michigan State, on the other hand, was led by upperclassmen who played with much more poise, balance and deliberation. They had a timely answer for every Kentucky surge, and amidst the buzz around all the freshmen, it’s the Spartans who will be the top-ranked team in the nation next week. Keith Appling (22 points, eight rebounds, eight assists), Harris (20 points) and Payne (15 points) led the attack, and a Branden Dawson tip-in with four seconds remaining sealed the deal. Appling was impressively steady, and Harris and Payne showed extended flashes as two of the most skilled players of the evening.

The second game, unlike the preceding one, was a duel filled with 19 lead changes. In the end, Kansas emerged with a 94-83 win. For the first 38 minutes, Parker, who finished with 27 points and 9 rebounds in his hometown, was the best player on the floor. He was 4-for-7 from three, showcasing a smooth stroke and well-polished all-around offensive game. “We didn’t guard him very well, he was great. He’s good. He was the best player in the game for a big stretch of the game,” Kansas coach Bill Self commented.

“I think it’s remarkable that a kid could who’s 18 could come in here – you go to your hometown, playing against Kansas,” Coach K said of his Chicago freshman phenom. “He was sensational. Imagine the emotion that you use. He wasn’t just worn out toward the end because of the way the game was played, I think he was ‘emotion-ed’ out. But he was terrific and that’s how you grow. I thought he handled everything really well.”

But it was Wiggins’ jumper and breakaway dunk on back-to-back plays in the final two minutes that ultimately put the Jayhawks over the hump for good. The sequence, “meant a lot because big players make big players,” Wiggins said. “I think our whole team, whoever is on the court, every possession we make big plays.

He humbly downplayed the highly anticipated matchup against Parker, where each player has been considered the top player in the class. “The hype was big,” said Wiggins. “I saw it all over TV, I just tried to block it out. Our names on the jersey don’t say Parker and Wiggins, it says Kansas and Duke. At the end of the day, a team’s going to win, it’s not one player that wins.” The freshman finished with 22-points and eight rebounds, wandering through foul trouble early on, but making his presence felt when it mattered most. Perry Ellis led Kansas with 24-points and nine rebounds.

It’s tough to live up to the hype in such highly touted events, but the 2013 State Farm Champions Classic was no let down. Fans got a look at some of the best college teams and coaches in the land this year, as well as a sneak peek of next year’s NBA draft.