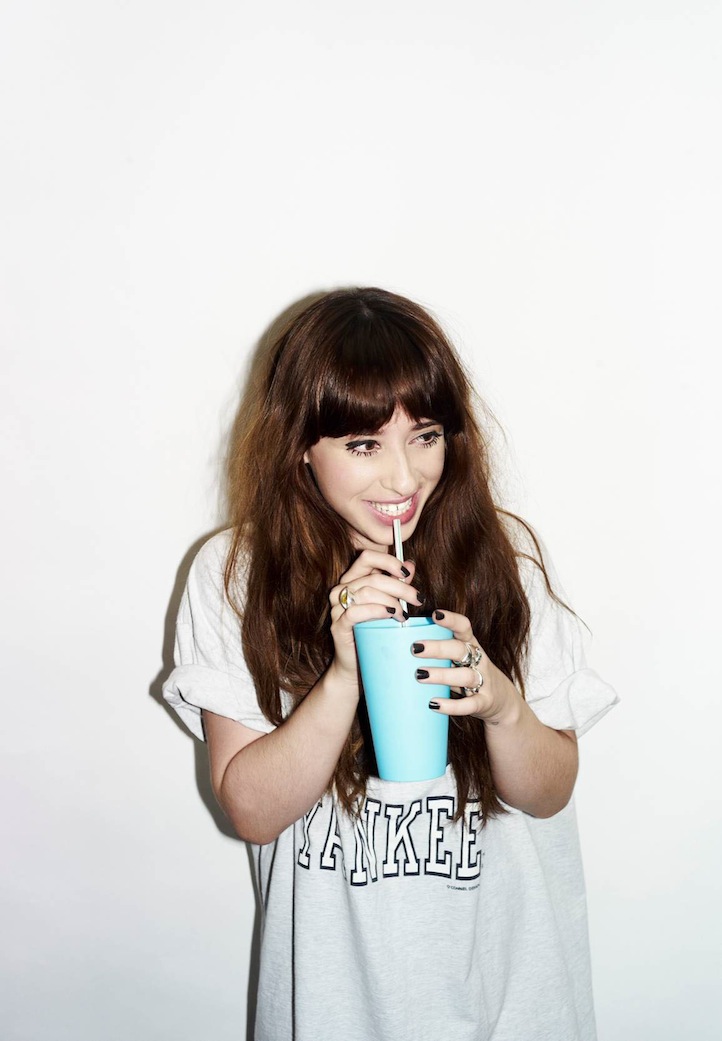 British songstress, Foxes, also known as Louisa Rose Allen, employed the synths commonly heard in dance music, whimsical percussion as heard in experimental rock, sentimental lyrics and her potent, yet delicate vocal range to her latest EP, Warrior. The 22-year-old channels the strong vocal strength of Stevie Nicks while exuding the same confident stage presence of Joan Jett, but in a manner that sets her apart from today’s melting pot of singers. Her passion for music began as a child and has resulted in her pursuit of a career in music that landed her the role as vocalist on Zedd’s “Clarity,” a tour throughout the UK and a debut LP that is slated to be released in the United States in 2013. Here, Foxes talks to Life + Times about her affinity for EDM , music’s therapeutic effect and the story behind her name.

Life + Times: You went to study music in college and didn’t like the studying aspect of it, so you dropped out. Did you have a game plan afterwards or did things haphazardly come about?
Foxes: I definitely didn’t have a game plan. I just knew I wanted to run off and write music and sing on stages! I do value the time I spent at music school though, it definitely gave me confidence and got me surrounded by music at an early age which was a whole lot better than if I’d been doing a beauty course in Southampton. It’s been a long journey, lots of writing, lots of playing at open mic nights and then musically I started to realize what I wanted to do and then met some people that helped me make that happen.

L+T: What served as the catalyst in your pursuit of a music career prior to your decision to even go to school for it?
Foxes: I’ve just always been musical from a very young age. I would annoy most family members with renditions of the Spice Girls and even make them listen to me attempt to rap Eminem. I do have a lot to thank for my mum and sister for really making sure I pursued music and didn’t stay in my hometown with a job I wasn’t passionate about. I think when you’re from a small town, it’s normal for you to think music is a bit of a dream career. My sister moved to London when she was 18 and when I got to 18 she insisted I come a stay with her on her sofa and go to music school. I was originally going to follow the rest of my friends who were all going to university to study beauty even though I knew that wasn’t the career for me.

L+T: Overall, 4 reflects your indie alt rock roots. Your collaboration with Zedd, on “Clarity” certainly highlights your versatility. How did you find each other?
Foxes: I’m actually a big fan of dance music. I take a lot of inspiration from good dance tracks. I think Zedd may have heard my voice on “Youth” and from there asked me to sing on the track. I remember Skyping him and embarrassingly not having done my research. It was only after we talked about working together that I looked him up on Wikipedia and found out about his work with all these incredible artists.

L+T: Tell me about what you found the most challenging, whether from a physical demand or creatively, about working on your latest EP.
Foxes: The last EP came from a very personal place, probably more than anything I’ve done. Emotionally, it was a very challenging time for me, so it was almost like cheap therapy writing the tracks. “White Coats” is probably the most personal. It was basically a way of taking the piss out of myself and trying to tell myself everything was going to be okay. It’s a very happy sad set of songs.

L+T: Now that Warrior is released, your new single, “Echo,” will be released in November and you toured the UK with Marina and the Diamonds; can you finally relax and sit pretty?
Foxes: Oh no, I’d be worried if I was sitting pretty! I think I work best when I’m busy and on the move. There’s lots coming up, so I’m still working on lots of stuff.

L+T: By the way, how was the tour?
Foxes: It went well, thanks! I loved it. It was funny because Marina tends to have these 12 to 13-year-old screaming girls there every night. It’s like she’s Justin Bieber. It’s brilliant! So, getting to play to that audience was great fun. They’re so enthusiastic and they really get into it.

L+T: Why the name Foxes?
Foxes: Well, it’s all down to my mum really. The first song I ever wrote was called “Like What Foxes Do.” I got to a point where I felt like my name didn’t really match the path I was going down musically. That and two other female musicians had very similar sounding names, so I needed to find something new. A friend suggested Foxes one day and I laughed it off thinking it was ridiculous, but weirdly when I went home it stuck with me. Then a couple days later, I rung my mum and dropped into the conversation what she thought of the name Foxes. She sounded really shocked and said ‘Oh my god! That’s so weird! I had a dream last night that foxes were running up our road and they were making really haunting beautiful sounds and I remember thinking it reminded me of your music!’ My mum’s a little crazy at times, but the good kind of crazy. After that, I just went with it. I figured mums’ are always right too.

L+T: As a musician, what do you find both beautiful and irritating about composing your music and the lifestyle you adopt?
Foxes: I think the most beautiful thing is being able to put your emotions into a song. It’s very much like therapy for me. I feel relieved after writing a song. It’s like being able to track parts of your life. [It’s] a bit like a cheaper and less painful way of getting a bunch of tattoos too. The lifestyle is pretty great actually. I get to do what I love and for a living! It’s a dream. I can’t think of much that’s irritating except maybe for stuff like writer’s block and the rarity of having inspiration just come to you. It’s a strange job to have, but I wouldn’t want to be doing anything else.