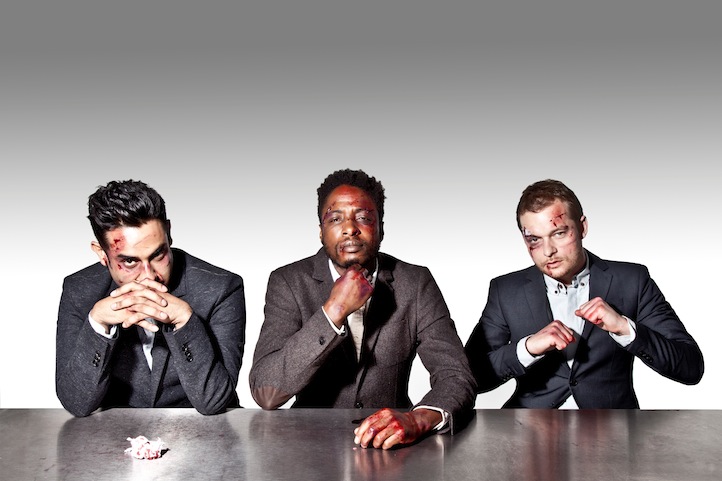 Although grime, a music style that emerged from British hip-hop and garage, is hardly a trend in the United States, dubstep, which also had its birth in England, is now a dominate sound in the American music scene. MCs Orifice Vulgatron, Metropolis and DJ Nonames, a British hip-hop, grime and dubstep trio by the name of Foreign Beggars has inadvertently reintroduced grime in a raw, dubstep package, The Uprising. On The Uprising, just released last month on deadmau5’s label, mau5trap, the trendsetting triad combined forces with EDM heavy hitters, Knife Party and even recorded a track with drummer Tommy Lee. “It was really nice to make a very varied album. I think one of the key reasons we signed with mau5trap as a label, they just gave us freedom to do whatever we want. We could have given then a whole ‘90s boom bap album or a techno album. They were like do whatever you want to do. For us, it’s just really special to put producers like Blue Daisy, Uzi and Kid Knievel on the same record as Knife Party and Tommy Lee. People we’d never pair in similar forums. That’s something that we love to do,” says Orifice Vulgatron. Life + Times and Vulgatron discuss genre definitions and the behind-the-scenes of the group’s latest project.

Life + Times: In the ‘90s, you dabbled in metal, grunge, indie rock, drum n’ bass and hip hop. You were also in a band. The latest record incorporates a bit of each of the genres I just listed. When did your love for music really begin?
Orifice Vulgatron: Since I was a baby, really. The early ‘80s for me. I think the first record I actually fell in love with, there’s two. One was “Beat It” by Michael Jackson. That was one of the first that I died for. Then, there was this song by Ratt called “Round and Round.” “Raspberry Beret” was one of my favorites too.

L+T: What instruments did you play when you were in the band?
OV: I used to play the bass, guitar and then I started rhyming in ’96 or ’97. I joined some different groups then. It was mostly guitar and vocals, then rapping.

L+T: Since you have such an eclectic background in music, I figured I’d ask you the definition of different genres, starting with grime. Grime is already established in the U.K. and different artists that are involved in it state that other countries really just don’t understand it. How would you personally define grime?
OV: Grime came out of garage. It’s still a hybrid of garage. There was a point when grime, dubstep and garage were all the same thing. The early 2000s and the ‘90s that’s when the start was born. Grime is a sound that is rap music, but has a much more frontal kind of attitude towards it. It’s underground U.K. Black music that comes from garage, drum and bass, dancehall and hip hop. So, it’s a hybrid of those four music movements. When garage went from being a purely instrumental music with hosts and it was all over the pirate stations and it kind of became a youth a movement, I think things got a little bit more serious and they developed their skills. Rhyming at that tempo you can get more lyrical than with the drum and bass, for example. That’s when grime was born. I think the sounds of the beats got dirtier. It was the same tempo as garage, but it got a bit harder and a bit more minimal because I think a lot of the kids at that time were making beats on their PlayStations. So, it had really simple sounds like claps and then synths and kickdrums. That’s where the sound comes from. That’s also what sort of inspired the early dubstep sound too.

L+T: Basically, grime is nothing new. That is interesting. Tell me about your writing process.
OV: We’re two emcees, so we write our own lyrics. The way we approach everything is very hip-hop. Those are our values and that’s where we come from. So, we write our own lyrics and perform our own stuff. If we’re writing a chorus, one of us will come up with an idea for a chorus and then we’ll work on the chorus together. Everybody writes their own shit because it’s important that we retain that individuality. Mainly, most of the vocalist and lyricists we work with write their own stuff.

L+T: “Never Stop” on The Uprising is definitely one of the boldest songs on the album. One of the lines on the track says, “I’ve seen so many things on this rocky road.” With artists, there’s always a hurdle that you have to overcome. Can you explain the experience that is behind this particular song?
OV: That was a more introspective version of our individual journeys that we’ve been on. I think that Chrom3, who wrote that chorus, has seen some things. I don’t know if I am entirely entitled to talk about them because it’s not necessarily my business and I can’t exactly say what he was talking about, but I know he’s had a couple of situations. If you look into his history, especially with the music that he releases, he’s actually been on two #1 hit records that have come out, but for some reason his management or his business stuff wasn’t sorted at the time. He was a young, aspiring artist. I think he’d been taken advantage of and he hasn’t been paid his dues for hits that he’s written. I think coming from the backgrounds that we’ve come from, being involved in this music and having similar aspirations over however many years, you go through so many experiences. You see a lot of things happen around you, especially in the industry over here [in England]. It’s harder for an independent artist to have a sustainable career just because it’s a smaller island. You have to build up your fan base locally before you take it internationally. Whereas, in the States, you can be an independent artist and kind of stay under the radar, but have a successful career which takes you over fifty or sixty markets. A lot of people come and go in the scene.

L+T:  “Apex” was produced by Knife Party. You guys also collaborated with Tommy Lee on one of my favorite tracks, “Mind’s Eye.” How was your experience working with them both?
OV: Yeah, it was wicked! Those guys (Knife Party) are from London. I moved [to Londonfrom Dubai many years ago for school first and then I moved back mainly for music. We’ve been on the scene with those guys for many years, but never really met each other and we respected each other’s music from afar. That (“Apex”) was one of the only tracks on the album where we actually got to spend a day in the studio making it because we’d been on the road so much, everything was mad remote. It’s just really nice to see how different people work. We had a couple of ideas, changed the ideas, just waited for the track to take shape and then bang! We wrote it, recorded it and did everything in one day.

L+T: Now, how did you get in touch with Tommy Lee? Also, what made you guys even think to include him on a track?
OV: For me, that’s crazy. My mom grew up in San Francisco in the ‘70s so she was mad into hard rock and everything .That’s the background I kind of come from. She showed me that stuff in the late ‘80s. I’ve been a Motley Crue fan since then. I was living in Holland with Noisia because I had some immigration problems and couldn’t come back to the UK for a while. So, to kind of sustain a career as opposed to going back to Dubai where I’m from, I decided to base myself in Europe so we could keep touring. I was out in Holland with Noisia’s manager, Walter, and that was exactly the time Skrillex decided to shell out the second Sonny Moore album he did and come out and do an electronic album with Noisia. So, we were living in a house together and he told me he (Tommy) had been a fan of our music and had been playing it in his sound checks. Between Sonny and Noisia that was the link to mau5trap and deadmau5 for us. He told me he had been on tour with deadmau5 and every time he sound checks he’d listen to our joints. Sonny a few weeks later sent us an email connecting us.

L+T: I actually heard about you three through 12th Planet a while back. He did a trapstep remix to the track, “Flying to Mars.” Just when you catch up with one facet of EDM, a new subgenre gets incorporated. What is trapstep?
OV: We called it trapstep for lack of a better word. It’s kind of dubby; it’s kind of chilled out. Trap is trap. I don’t want to see a fucking subgenre called trapstep. It’s too varied. It’s kind of the EDM trap fusion that’s happening…it’s really early. Some shit is dubby, some shit sounds garage-y, some shit sounds like moombah and some sounds like straight hip hop. I don’t want to start a subgenre yet. It’s already too small. It’s too early. I wouldn’t say trapstep is a genre; it just seemed like the rightest name to call it at the time.

L+T: I figured you’d be the best person to ask. It is such a challenge to keep up with all of these subgenres and fusions. What is the significance of creative freedom in your eyes?
OV: We could have made ten dubstep tracks and it would have sold X amount and made whatever money, but it’s important for us to be progressive. I feel a responsibility in that respect rather than us try to leech onto something, we should be inspiring people.