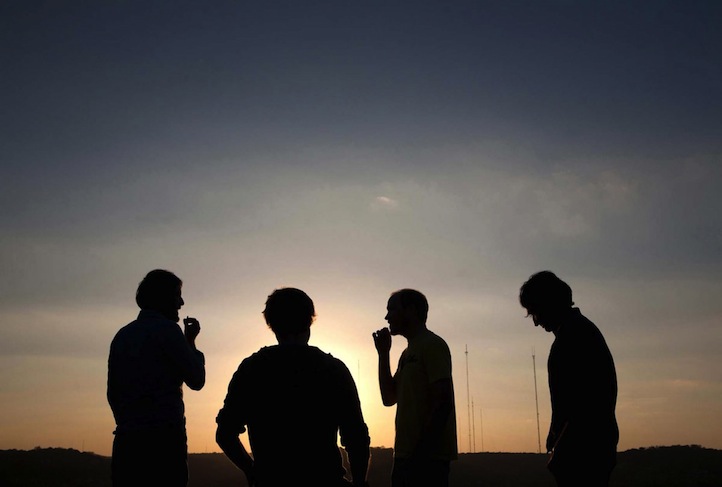 Strong camaraderie and creativity are the two components that have kept post-rock band, Explosions in the Sky (EITS), on the path of artistic progression throughout the years. EITS, Chris Hrasky (drums), Michael James (guitar and bass), Mark Smith (guitar), and Munaf Rayani (guitar), have been a band since 1999 and friends since the age of 14. “No ego has eclipsed the greater picture,” Munaf states. “We can go as far as we’ve gone with each other – same members, same people who have been with us since day one. It just shows that if you can find success with your friends, you should stay on that road always.” Their two year break in album releases should not be mistaken for misplaced ingenuity. The quartet is behind the soundtrack of the recent Prince Avalanche film. Each EITS song is a dramatic symphony that tells a unique emotional story. “We are always in conversation, like, ‘Hey man, what do you think about this kind of rhythm? What do you think about this kind of melody?’ We’re just telling each other stories all the time – kind of just collecting all of these notes while we’re on the road,” Munaf interjects. Their scheduled tour with Nine Inch Nails is fast approaching and once their two months on the road is up – they will potentially begin writing their seventh studio album.

With over ten years of success as a band, the thought of a musical divorce is completely out of the question. Concerning the band’s relationship, Munaf adds, “Fame and fortune can really amplify an ego. If somebody already has an ego, that can ruin a lot of things. We are all human and we all have our bad days, but for the most part we have good days.” Munaf speaks with Life+Times on the subject of the band’s future plans and the “good days” to come.

Life+Times: Although your songs are mostly instrumental, they have a distinct sound – none are the same. The songs are very true to the EITS sound, yet it’s unique. How are you guys able to create a sound that helps you progress as an artist, but at the same time doesn’t steer away from what you’re known for?
Munaf Rayani: Pure accident.

L+T: Pure accident?
M: (Laughs) Yeah, we just stumble onto melodies. No, I’m just joking! The four of us [have] equal parts in this thing. Each of our personalities, I think, find their way into the melodies and once we sit down to kind of play these notes together, they just start to form, really, themselves. It’s a bit silly to say, but truly we’ll start to write a song and flush out an idea and we’ll look up and it’ll be done. We’ll remember that the process was a little difficult and we couldn’t figure this out and that out, but by the time we get to the end and the song is finished it is a surprise to us every time.

L+T: Really?
M: Yeah! [It’s] a great surprise, a wonderful surprise. There’s really no definite rhyme or reason to how it’s done and why it’s done other than we want it to be something genuine, something sincere. Once our conversations move to musical notes, we hope for the best.

L+T: That’s one thing I definitely admire. It seems like it’s a calculated process, but like you said once you get the initial idea – it just comes about.
M: Absolutely. We are very aware of the song that we are trying to write while we are trying to write them. No notes are just kind of unnecessarily placed. We’re never trying to fill up a section of a song because we need to fill some notes here. Everything has its meaning, every note connects to each other. How it’s fully done isn’t realized until we step back and see the end.

L+T: Prince Avalanche was recently released along with the soundtrack that you all created. I just read an article that you guys along with David Wingo will be creating the score for the follow up film, Manglehorn. Is that correct?
M: Well, I mean we’re waiting to see how everything goes. It’s funny how one little thing gets said and it just spreads like wildfire. That’s all of our closest friends are making this picture or helping to make this picture, so when it comes time for music to be had, I have a feeling it will be us. But who knows what tomorrow holds, right?

L+T: That’s exactly why I wanted to confirm with you personally. I didn’t want to assume anything based off an article.
M: Well, that’s good. That’s exactly how you should do journalism because there’s a lot of lazy writers out there and they’re just referencing other people’s stuff. It doesn’t make sense. Manglehorn is in the papers and the man who wrote it is a gentleman by the name of Paul Logan – who is so on the up. You have no idea. You gotta keep your eye on him. He’s one of our best friends that we grew up with – just some kids in Midland, Texas. He’s been writing scripts his whole life. He’s an aspiring filmmaker and now his debut film is here. When he starts to move, he’s going far. We’re very excited about that. With Paul writing the script and David Green gonna direct it, I think it would be very natural for us to make the music with David Wingo again.

L+T: Thanks for clarifying that. You’re not a beginner to the world of film scores. The Friday Night Lights soundtrack remains one of my favorite albums. As an artist, I feel like you would have to see the film to actually know how to go about writing the song for specific scenes. What is the step-by-step of creating a movie soundtrack?
M: Well, if we sign on to do a film, we probably read the story or know the story. To tell you the truth, sometimes and in often times, it’s better if we just start writing. If we let our imaginations make the scenes before they even started shooting, we can hand over music that can hopefully kind of influence the way they set up a shot, the way a sequence is put together – especially when collaborating with such close people like David Green. We’ve known each other for so long and we know what he is capable of. We can almost hand him over a soundtrack before a movie is made and have that make the movie. But obviously, once the picture starts to get shot, we get to see the footage and kind of fine tune where to place the music in its best ways. Often times, and in a way I think it’s a much better way, is to make the music and then see the film get made.

L+T: So, there’s really not a cookbook method of creating a soundtrack.
M: No, no there isn’t. Honestly, there is and Hollywood does it all day every day. That’s why every score sounds the same, but there are much more creative ways of going about things.

L+T: What’s your favorite part of the process?
M: There’s so many aspects of it. It’s a lot of fun to just make music full-time. It’s even more fun to make music for movies. It’s indescribable when it’s something really cast, then when we all step back and see this film or hear the music play…and it actually works. Those are the best parts – eating popcorn in the theater, watching it, and listening.

L+T: I definitely think the track must set the mood of the scene. In 2011 you guys released Take Care, Take Care, Take Care. Is there a follow up in the works?
M: We’re gonna hit the road with Nine Inch Nails. So, a couple of months we’re gonna be on the road with them – which should be amazing, you know, and make-believe, exciting, and all those things. After that, we put our heads down and we start writing melodies. [We’ll] try and get that new record out and that’s where everybody’s inspiration is and that’s where everybody’s mind frame is. The end of the year into next year we’re just writing new music. Hopefully, don’t quote me on it, but hopefully sometime by the end of next year we’ll have something to show you.

L+T: Oh, I’m quoting you on it along with that Manglehorn score rumor! I’m just kidding. Yeah, I noticed that you’re opening for Nine Inch Nails in the fall. That’s so great!
M: (Laughs) It’s kind of crazy getting that call. We were like “Wait! Did you call the right number?” So, we were pretty thrilled with it.

L+T: That’s going to be a crazy experience. When is that – September or October?
M: Yeah, the end of September through the end of November. So yeah, a couple of months of playing basketball arenas which will be crazy because we’re big basketball fans and we’ve grown up watching ball all our lives. Now we’re gonna go play in the Staples Center or The Palace at Auburn Hills or Key Arena. It’s just all so make-believe, and pretty overwhelming, and exciting.