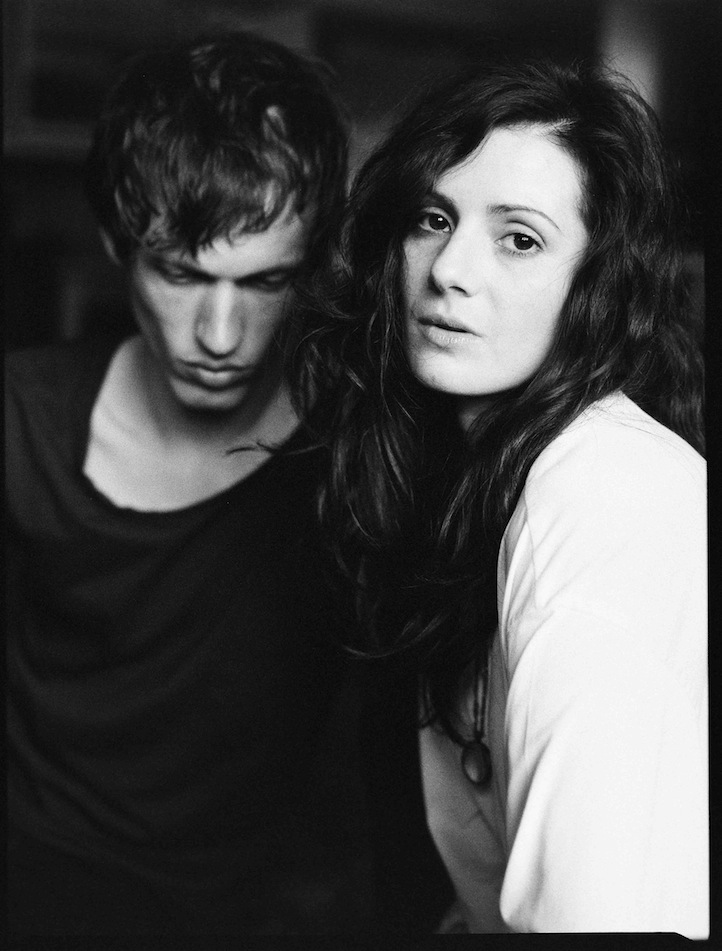 Brooklyn-based indie duo, Exitmusic, consisting of the musically gifted married couple, Devon Church and Aleksa Palladino are no strangers to the unknown and nonfigurative scenarios that are heavily exuded through the band’s lyrics and fused in the mesh of synths and electronica. The strong connection that was initially felt the first time the couple met while on a train in Canada, is the same link that adds to the complete harmony of their latest album, Passage. Aleksa reveals to Life +Times how one fateful trip served as the catalyst to her marriage to fellow bandmate, Devon Church and the beginning of their brainchild, Exitmusic.

Life + Times: I was reading through your bio and I noticed that you said some of your songs are slightly abstract, but where they are coming from emotionally is always clear to you. What would you say was your root emotion behind your latest album?
Aleksa Palladino: There’s so many that I think helped in creating the album. It’s so hard to answer. A sense of loss…the confusion of being a human and doing that while feeling authentic and purposeful. The struggle of being human, I think.

L+T: Did both you and Devon come up with the concept for this album?
AP: Yeah, we write everything together. It’s very much a joint process. We started writing when we got together years ago. We basically grew up as we were writing about the language we always were creating together. It really is one meaning, but it is two people that come together to create that one message.

L+T: Speaking of which, you were just saying you both have been writing music together for years. I know that Devon is from Canada and you’re a New York native. How did you two actually meet?
AP: We met when we were eighteen on a train from Canada, we were both travelling. We met on the train and were in the same car for a couple of days. We spent two days on the train and were just talking about music and we felt such a sense of recognition in each other, but we were young. We were separated for about three years, and then we reconnected.

L+T: At one point, you both moved to L.A. Do you think the move helped in the growth or evolution of Exitmusic’s sound?
AP: It’s hard to really credit a city with that. It’s so much of who we were in our lives at that time. We moved to L.A. in 2002 or 2003 and we didn’t know anybody. We went into sort of hibernating and really writing while in that.
Devon Church: I think getting away from New York was good for us.

L+T: When I was listening to the lyrics of the song, “Passage,” the chorus really stood out. “Hold back the curse of life. You’re so incredible, but why can’t I touch you? Hold back the pain of life.” I’m going to guess that this song is about suppressing feelings, but how do you two interpret this song?
AP: It’s a tricky one. It’s about a lot of things. It’s about wanting to sort of avoid reality, not wanting to see the light and know you have to. You see reality in the corner of your eye, but just wanting one more night of not having to be responsible for better judgment in a way. Falling in love with the illusion of something and not wanting the reality to take place.
DC: There’s a place you go to escape the day to day kind of realities, but in some respects are a deeper reality, but you’d always be forced back into your troubles. Does that make sense?

L+T: Basically wanting to live in a moment, but knowing sooner or later you have to come back and face reality and face the music so to speak.
AP: Yeah.

L+T: The album just came out in May. Are there any plans for a national tour?
AP: I think starting mid-September, we go around the country and then wind up in Iceland for the Airwaves Festival. After that, we will end up in Europe for a month. So, we’ll be basically be on tour from mid-September to November.

L+T: Considering you just released an album, creative people can never sit still. It seems like you both always have some idea circulating. Are you working on any new or side projects?
AP: We’re always writing. Anytime we’re home, we write. We’re always busy and trying to find other ways to fix our music as well. So we definitely take time to make as many ideas as possible happen. Just from the other side of things, I’ve been writing and directing films, which has been a really amazing experience. It’s my first time.

L+T: You’re in Boardwalk Empire. How are you able to balance acting and being part of Exitmusic?
AP: Well, I’m not doing Boardwalk Empire anymore. So, that frees up my year a lot, because that was like eight to nine months a year. So, yeah, you really just take it from project to project. You manage to make it work. If you don’t mind being exhausted for all of them… (Laughs)

L+T: Revisiting your writing process, do you actually right the songs separately then get back together and see where exactly the idea leads you to determine what will become a song or do you start out the initial process together from the start?
AP: You know, it happens in a couple of different ways, but the majority is always written together. I think that’s what adds to this project. It’s really something we do together. It’s this internal world that we have that we try and build in the exterior world. Every sound is important. For us, it’s like a painting where every choice has to be right. It’s very contemplative and thought through.