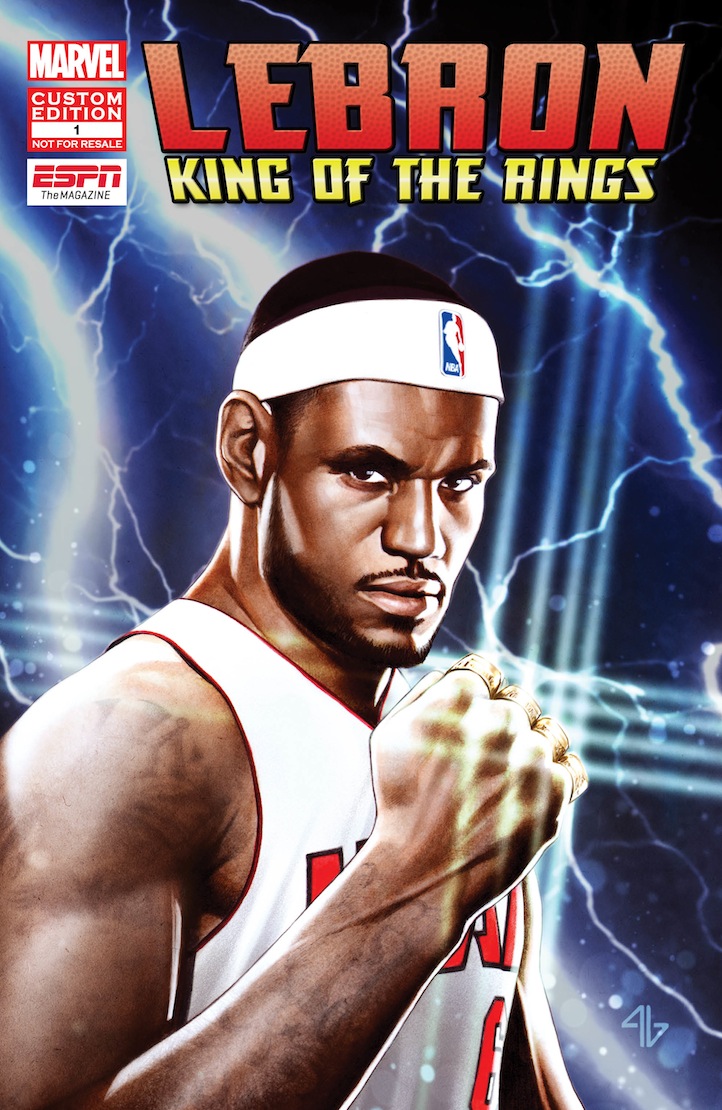 In sports, athletes of the modern era possess a unique skill set that allows them to appear more superhuman than mere mortals. No one exemplifies, nor possesses, these mythical traits more than the reigning NBA MVP and champion, LeBron James. In the game of basketball, only Michael Jordan compares to James’ out-of-this-world abilities. In fact, James joined MJ as the only player to win an NBA title, NBA MVP award and an Olympic gold-medal in the same calendar year. Impressive, nonetheless, but King James’ story is not done being written.

Two years ago, James predicted he would win not one, not two, not three…but seven NBA titles, upon departing Cleveland to join Dwayne Wade and Chris Bosh with the Miami Heat. The “Decision” caused quite a stir, but since his masterful performance last season, and during the Summer Games in London, not only did James set himself apart from the rest of the pack, but it also enabled him to turn the tide of public opinion that was once stacked against him. With a tight grip on the basketball world, what if LeBron’s championship prophecy ultimately comes to fruition?

ESPN The Magazine and Marvel Comics have teamed up to tell that story, creating LeBron: King of the Rings, an epic tale of zombies, clones, holograms, bionics and a superstar who will stop a nothing to fulfill his promise. Life + Times spoke with Axel Alonso, Marvel Comics’ Editor-In-Chief, about the creative process behind the collaboration, heroes and villains, and the future of athlete comic books.

LeBron: King of the Rings will unfold in the pages of ESPN The Magazine’s NBA Preview issue, on stands Friday, Oct. 19.

Life + Times: How did this spectacular collaboration come about?
Alonso: Deputy Editor Otto Strong at ESPN the Magazine, who I worked with on the NBA preview issue a couple years back, gave me a call and said, ‘hey, listen, we’re interested in maybe collaborating again. This time it would be a comic book specifically telling the story of LeBron James’ famous prediction of winning, not one, not two, not three, not four, not five, but seven or eight titles, and what if this were to comes true?’ Now, I hate LeBron more than the next guy [Laughs], and I will be rooting against the Lakers until the day that I die, so I was momentarily mortified. Then, I came to my senses and realized what a great opportunity this would be what a fun story it would be. ESPN the Mag’s Senior Editor Ty Wenger, who had written the story in a fevered dream, provided us with his vision of what would happen for titles two, three, four, spanning decades worth of time. It was reasonable to draw and about 95 percent of it worked. We hired Christos Gage, who is a comic veteran, to turn this beat sheet into an actually script, which included captions, balloons, panels and the entire art breakdown. Then, we agreed very quickly that it would be more fun to include a number of top comic artists in the project. Guys, who each of them have their own fan base, Mike Deodato, Greg Land, Scot Eaton and Terry Dodson, and each of them would get a spread since it was an eight page comic. Each artist would get a two-page spread. So we assigned those accordingly and we went to Adi Granov for the cover, because we wanted that real nice, painterly, photo-realistic, galvanizing, kind of cover. And that was that. 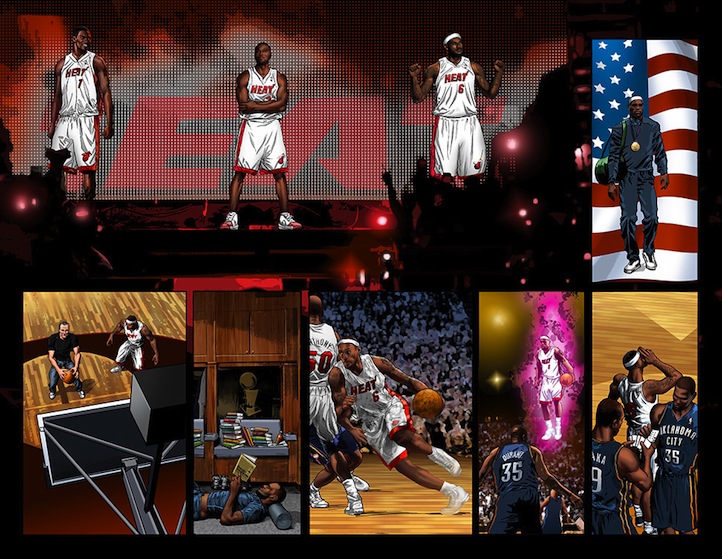 L+T: In many ways LeBron has ascended the ranks, almost to the same level of Michael Jordan, where he’s been immortalized in a fantasy world. MJ in Space Jam and now LeBron’s designed by Marvel. Just speak to that similarity.
Alonso: Well, LeBron is a figure that’s globally known and he’s extremely controversial. There’s no absence of people rooting against the Miami Heat, fairly or unfairly, right now. I would say he’s more controversial than Michael ever was. Michael very carefully cultivated his public image and didn’t take any public relations hit, the way that LeBron did. So, I think by Marvel committing to the story is immortalizing him. The story is fun and fascinating because what ESPN has done is taken full advantage of Marvel’s unlimited special effects budget to tell a story that involves science and magic. Rick Barry makes a cameo as a free throw shooting sensei. There’s a zombie Shane Battier. There’s a bunch of 60-year-old NBA players designed as a Dream Team. It’s a lot of fun and there’s a very frustrated Oklahoma City team waiting in the wings in the end. So, I hope, LeBron appreciates this. [Laughs]

L+T: How much different was this project compared to the Tim Tebow comic earlier this year?
Alonso: This one’s different in a lot of ways because it was such a pointed fictional narrative that reaches such a wide audience. I think that the synergy between ESPN The Magazine, and ESPN as a whole, and Marvel comics is incredible. Sports stars are the closest beings today to superheroes. They have super human abilities and they get paid for them. They also have personalities that reveal strengths and flaws that make them interesting characters in the story of the games. LeBron’s story is not over. No one disputes his excellence on the court. We’re waiting to see what feat of heroism he does next. And not all of us are rooting for him. So again, when ESPN came to us, they knew that there was a story here. That LeBron has a story that needed to be told in a manner that transcended just journalism. 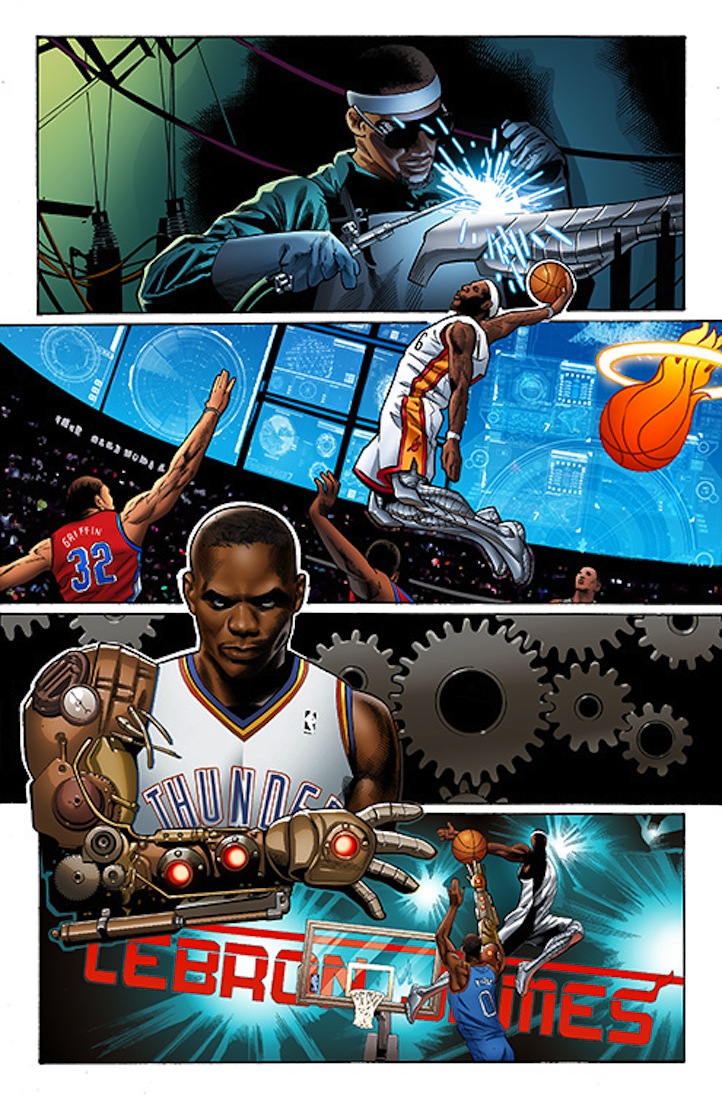 L+T: Do you foresee athlete comics in Marvel’s future?
Alonso: I’d love to do something in the future. I wouldn’t be surprised if we did do something in the future, without a doubt. When [the] Golden State [Warriors] wins the 2016 NBA championship, I pray we do a special edition comic book at that time. I think that, you know…they know where to find me [Laughs]. ESPN knows that we’re interested and I hope we do collaborate again. I hope we can do other sports as well. I obviously would love to see what we could do with the NFL, Major League Baseball and global soccer. I have artist all over the world, who would love to draw their favorite soccer players and teams.

L+T: Is there a market for athlete comic books that fans would support?
Alonso: Well, in the direct market, which is the market we sell to, I don’t know. Maybe, maybe not. It depends upon a lot of different factors. In the market that ESPN hits, I would say, ‘Yes.’ ESPN the Magazine has 2.1 million readers, if I’m not mistaken, and I know that the last time we collaborated with them it was a resounding success. There’s an understanding that there is an incredible overlap in our demographic and that we speak the same language. What’s interesting to me about that is, through the eyes of a child, the NBA is populated with heroes and villains. Guys you root for and guys you don’t. With good guys and bad guys. There are plenty of kids in Miami who view LeBron as being a good guy and that’s part of the beauty of it. So again, I think that collaborating makes perfect sense and as Marvel’s Editor-In-Chief, I would always be open to exploring the opportunity of doing comics with teams and players. I would have loved to have done an Allen Iverson comic book. 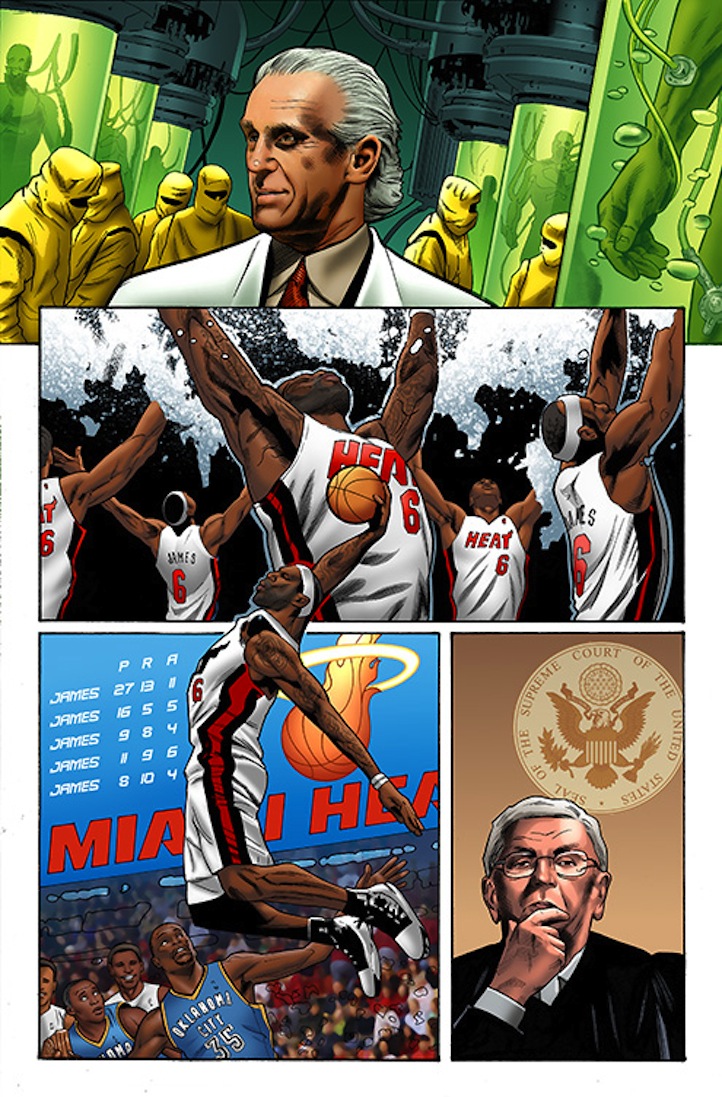