A pristine 42-0 record. A five-division world champion who has claimed seven titles. Two-time Ring magazine “Fighter of the Year.” The pay-per-view king with the largest buyrate in boxing history (2.4 million people tuned in for his fight with De La Hoya). The current pound-for-pound king of boxing. And, arguably, the best defensive fighter and ring tactician the sport has ever seen.

It’s hard to deny that Floyd Mayweather is the best fighter on the planet and will likely go down as the greatest of our era, if not in the top ten greatest boxers of all-time. Yes, that means he will be amongst the likes of Muhammad Ali, Sugar Ray Robinson, Joe Louis, Henry Armstrong, Jack Johnson and Willie Pep. Some may scoff while he’s still active, but Mayweather will wait until he hangs up his gloves for you to appreciate what he has brought to the sport of boxing. Many are reluctant to give him his due until he faces the other best fighter on the planet: Manny Pacquiao. For three years, the world has waited for what could be the biggest money fight of all time. It hasn’t happened and skeptics are getting antsy. You know who isn’t? Floyd Mayweather.

“I don’t worry about the fight,” Mayweather bristles. If the constant inquiries about a Mayweather-Pacquiao fight have been wearing him down, he surely isn’t showing it. Questions about his legacy being tainted bleed into conversations whenever the two names are brought up. “If it was really all about Pacquiao, then I wouldn’t have to fight 42 other opponents. I would just have to fight Pacquiao to call myself the greatest, right?” He has a point. You can’t totally discredit what he’s done because the Pacquiao fight has yet to happen. Forty-two times he’s stepped into the ring and 42 times he’s had his hand raised in victory. Beyond that, we’ve never seen Floyd Mayweather busted up or badly damaged. He has the face of a 20-year-old at the end of a Proactiv commercial — it’s quite the impressive feat when you consider the once-great champions that struggle to not speak in slurs. He’ll look to continue his extraordinary fifteen-year career on May 5th when he faces Puerto Rico’s Miguel Cotto at the MGM Grand Garden in Las Vegas. No, it’s not Pacquiao, but as Mayweather tells it, it surely could have been.

“Manny Pacquiao had a chance to step up for the May 5th fight and I’m the one who was turned down,” Mayweather says of the rumored $40-million purse that he offered Pacquiao over the phone. “We could have been made this fight happen, but he wants a 50-50 split of all the money. If you’re doing record-breaking numbers, it’s logical that he’d get 50-50. But he’s not getting those numbers, so there’s no way possible that he can get a 50-50 split.” 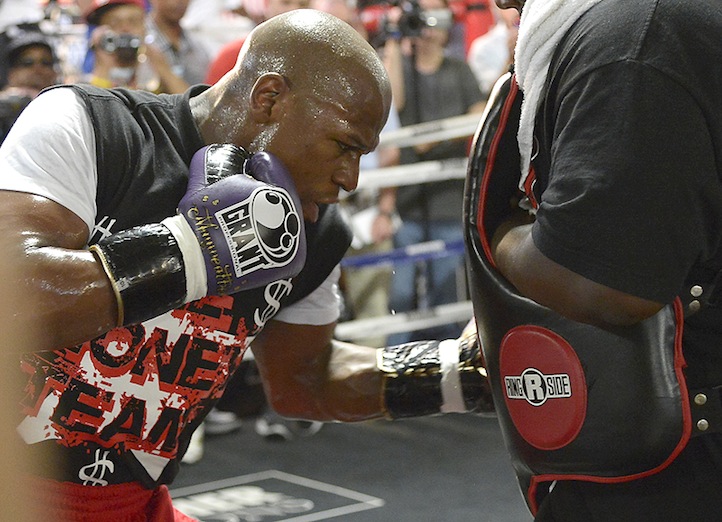 And with that, Cinco De Mayweather will be headlined by “Money” facing Cotto. There have been grumbles about Mayweather facing what is considered Pacquiao’s leftovers after the Filipino scored a resounding 12th-round TKO back in 2009. But Mayweather disregards the notion that Cotto is simply leftovers considering the fact that the Puerto Rican’s two losses have come against Pacquiao at a catch weight of 145 lbs. (Cotto regularly fought at 154 lbs.) and Antonio Margarito, who was caught loading his gloves with plaster in the fight after he beat Cotto.

“I can’t overlook a guy like Miguel Cotto,” he says. Mayweather feels that moving up in weight to face Cotto at his comfortable weight of 154 lbs. makes this a far more competitive matchup. And the last time Mayweather fought at 154 lbs. was against Oscar De La Hoya. “The fans should watch this [fight], because in my eyes, Miguel Cotto is an undefeated fighter. He fought one guy at a catch weight and another guy who got in trouble for cheating. He’s strong a knockout puncher and he always comes out and fights in a pleasing way.”

If Mayweather defeats Cotto as many anticipate, the reality is that many won’t really care. Yes, Cotto may be one of Mayweather’s toughest tests to date, but the only thing that matters to most is Pacquiao. However, the 35-year-old Mayweather and the 33-year-old Pacquiao are light years apart on making a deal and “Money” isn’t willing to wait. As a matter of fact, after he serves a 87-day jail term from a misdemeanor battery charge that begins in June, Mayweather plans to appear in the ring again before the end of the year.

As the window rapidly closes on the Mayweather-Pacquiao showdown, there is some concern as to how much longer Mayweather will continue to fight. Despite his age, the undefeated fighter hasn’t lost a step and plans to fight until the age of 38. “I think I’m getting better with age, actually — I think I’m still sharp, I’m still hungry,” he says. “I want to give you guys more than just a few more fights — this fight plus five more if I can.”

For Mayweather, it’s all about cementing his legacy as not only a great fighter, but a great person. While he provides excitement inside of the squared circle, nobody would care if he wasn’t as polarizing of a figure as he is. Love him or hate him, Floyd Mayweather is entertaining — or as he puts it, “must-see TV.”

“In the sport of boxing you have certain people that look at it as the sport, but when it gets to this level, it becomes a business,” he explains as he highlights the HBO 24/7 series that he helped produce. “When you’re doing pay-per-view, you have to put asses in the seat. You have to do creative things to make people tune in.” By creative, Mayweather has crafted the “Money” image that is pompous, egotistical, obnoxious and conceited. Instead of paying money to see him win, many do the same to see him lose. Either way, you will watch and pay attention. One thing you won’t do is forget.

“As far as my career, I think I will be really appreciated probably 15, 20 years from now,” he says. From the remarkable wins, charismatic personality and work in the community, Mayweather is at ease with his legacy — with or without Manny Pacquiao. “If anyone has followed my career, they know that there’s been a lot of obstacles and a lot of ups and down throughout. But day in and day out and in the squared circle, I went out there and always did my best. I always put my boxing first.”