At the beginning of the 2013 WNBA season, much attention was directed toward the first three selections of the 2013 draft – Brittney Griner, Elena Delle Donne and Skylar Diggins. Griner and Diggins had received plenty of national media coverage over the course of their respective college careers at Baylor University and Notre Dame, and were household names by the time they got drafted; Delle Donne, who attended the less-prestigious University of Delaware, was not as well known but perhaps the most talented. “Perhaps” has since turned into a “for sure,” as Delle Donne, the second overall draft pick this year by the Chicago Sky, has put together an incredibly successful season halfway through her rookie campaign.

Similar to Kevin Durant or Dirk Nowitzki on the men’s side of the game – extremely tall, highly skilled, perimeter-oriented players – Delle Donne is unlike any women’s player that’s come before her.  A four-time All-American at Delaware (she initially committed to play UCONN), at 6-foot-5 with the skills of a guard, she’s a rare breed and the only player of her kind at the moment.

“She’s 6-foot-5 with a skill set that’s special,” Chicago Sky head coach Pokey Chatman said after a preseason game back in May. “She has a little power to her game, a lot of finesse, she can put it on the floor with some quickness when she’s going against a four. We can invert some screens for her so she gives you some options, she creates a lot of space. She has a special skill set, that’s why we took her in the draft.”

“I really feel like I’m able to shoot over people,” Delle Donne said. “Even if I’m guarded, sometimes it’s still like I’m open because I have that 6-5 height, where [if] I have a smaller guard on me, I can elevate and shoot over them.” 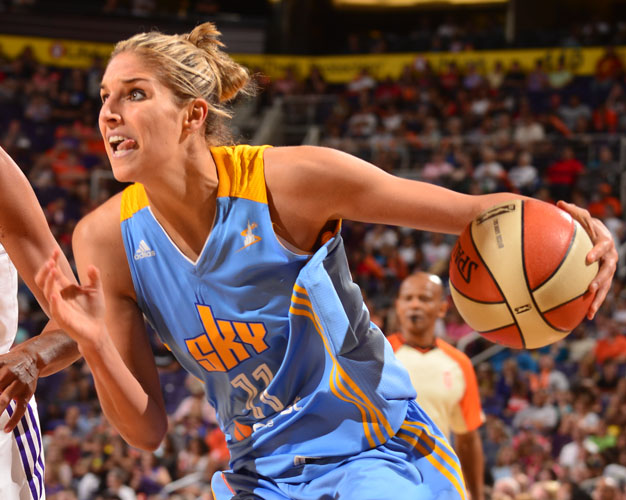 It’s proven to be a highly effective advantage that’s led to her being selected as a starter to the July 27th WNBA All-Star game in Connecticut. Moreover, she’s gone from being somewhat unknown entering the season, to the leading vote-getter among all players, making her the first rookie to do so.

“At first, I was speechless. It’s really an amazing thing,” she said reflecting on her upcoming first All-Star game appearance. “I’m honored to just be on the All-Star team and to hear I was the number one vote-getter was extremely humbling for me. I’m just so thankful to all the fans and their dedication to sit there and click vote for me. A lot of [the voting] was probably Delaware and hopefully I’m starting to get a following across the country.”

Halfway through the year, she’s helped the Sky to the top of the Eastern Conference with a 12-4 record, posting averages 18.6 points and 5.5 rebounds along the way. The success is simply an extension of her college career where in four years at Delaware she tallied 3,039 points – fifth all time among NCAA women – averaging 26 points and 8.5 rebounds as a senior.

“A real big reason for the transition going so smooth is my teammates and my coaches, they’ve really helped me along the way,” she said. “Since the first day of training camp, it wasn’t about, ‘Hey, you’re the rookie, we’re gonna put you in your place,’ it was more about them saying, ‘You can contribute to this team and we’re gonna help you get to that moment as quick as possible.’ Players like Swin [Cash] were in my ear, helping me out telling me different things I needed to do. We just didn’t have that whole rookie-veteran type of relationship and I think that was huge. It was a bit of a surprise that I’ve been doing so great, but I also had high expectations coming into this thing and I thought I could do a lot for the team and I knew that in my position I was going to fit in really well with this team. More than anything, it was going to be about chemistry and that all clicked immediately. There’s always room for improvement, I’ve got a lot of work to do,” she said before the season. “Defensively, I’ve been working extremely hard. My teammates have been helping me a ton, getting in my ear, telling me what I need to do and that’s exactly what I need.”