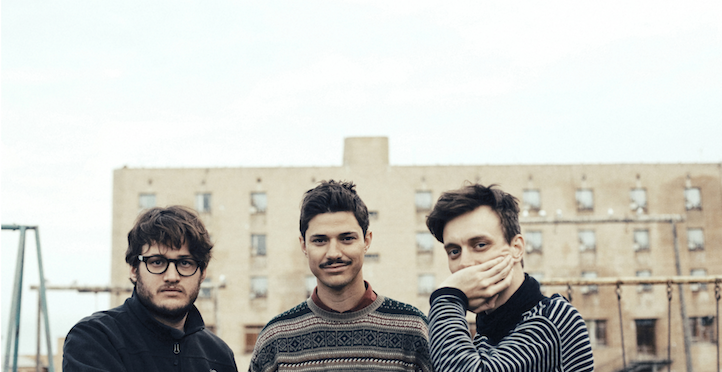 Electronic music has never before had such an extensive and open ended definition as it has now. Aiding in the mark on the history of electronic fusion is none other than the Danish indie band trio, Efterklang, consisting of Casper Clausen (vocals, multi-instrumentalist), Mads Christian Brauer (electronics), and Rasmus Stolberg (bass, guitar). Efterklang is the love child of the traditional guitar and drums of an alternative indie band with the glimmer of electronic instrumentation that is commonly used in house or industrial music. Their current tour in support of their latest album, piramida, also includes the intensity of a live orchestra combined with their cross genre amalgamation. Clausen speaks with Life + Times on how a ghost town, live sound samples, electronic elements and a classical symphony created piramida.

Life + Times: In Danish, “efterklang” means “remembrance.” What experience led to choosing this as a band name?
Casper Clausen: Primarily, it means “reverberation,” but it also refers to “remembrance,” as you said. It’s a term we came up with when we were searching for a name basically like ten years ago. We were just sitting down at a table and trying to figure out what to call ourselves and we stumbled upon this interview with a German electronic musician and he was mentioning this efterklang and we thought, ‘that sounds quite nice.’ It’s the spirit of the note once it’s been there, the aftermath of it. At that point, we hadn’t really put out music, so we didn’t see all of the trouble of people with the pronunciation. It works alright. People get it. “Efter” means “after.” “Klang” is also used in German for “sound.”

L+T: You are based in Berlin, right?
CC:: Yes, most of us. Rasmus, the third part of the band, is still in Copenhagen. Mads and I moved to Berlin two years ago.

L+T: How do you like it?
CC: I love Berlin. I think it was a great change coming from Copenhagen. Berlin is a very diverse city and full of a lot of contradictions in a way. It’s quite an easy going city in many ways, sometimes a bit too easy going. There’s a lot of hanging around and people just trying to make stuff. We just went to New York City and had the opposite experience of a city that’s full of people where everyone kind of knows where they’re going. It’s a little bit more flowing and much more all over the place than Berlin. There’s always a lot of bad stuff happening and bad vibes, but at the same time you also meet these incredible people that have gathered there to follow their heart. I like it quite a lot.

L+T: Their music scene is amazing. Your band fuses in the folk and indie rock while also combining electronic elements. So, that was an awesome move for you both considering Berlin’s ties with music, particularly electronic.
CC: There are a lot of good musicians there and a lot of things happening. A lot of people on the new record also, a lot of Berlin based musicians that we handpicked. There’s definitely been this shift coming from Copenhagen to Berlin because it offers a bit more opportunities to work with great musicians and personalities.

L+T: In regards to the various musicians you have partnered with, I’ve noticed that you perform with a live symphony sometimes.
CC: This fall is quite crazy. We basically started off with an offer from the Opera House in Sydney and they were asking if we would do something with their orchestra. We went in May to do the world premiere of this new album with the Sydney Symphony. Afterwards, we were working quite hard in getting all the scores and arrangements prepared. It felt kind of ridiculous to not try and fuse the other orchestras into it. There are a lot of producers around the world kind of interested in this crossover things and trying to mix the classical world with the rhythmic world in a way. We found the right people and the right orchestras. Then, we put together a tour, which is going on this fall. Then after that, we are going to strike it down to six people again and do shows in a more club environment without the orchestra. We’ve done these things before and we’ve done quite a lot with classical musicians and instrumentation. We are quite used to it, but the idea of putting concepts up still feels like a special occasion, it’s like a big show with a lot of energy and thought that is put into each one of them.

L+T: Yeah, it’s really original. In the teaser video for the latest album, piramida, there are samples of clinking bottles in a warehouse and one of the bandmates was recording the sound of his running footsteps on a pier. Tell me about the idea behind the compilation of these sound clips.
CC: The inspiration comes from the place where the video was shot. This place is called Piramida. It’s up in the Arctic Sea on an island called Spitsbergen. We went in August of last year. We heard about the place a few years ago. Then, we decided it would be really nice, fun and interesting to take this city, a settlement, it used to be a thousand people living there, and take that place, go there and start the album from going on a trip there; basically collecting sounds, collecting inspiration and let that be the beginning point before any music was recorded, before any songs that appear or anything. We went up there with a blank sheet. The idea was to start off there and then just see what we would come back with. Then, take all this stuff that we come back with, then try and start emulating some kind of sound patterns and process them into some keyboard sounds and multi process sounds. Then, start working in a more conventional fashion of making songs. A lot of the previous records kind of started from bits and pieces and never really had the overview of where things started. After the nine months, we all knew exactly where this was grounded. This was the root of the album. Afterwards, the album took off and grew. A lot of the sounds still stuck with it and the other sounds just morphed. It all comes down to that place.

L+T: Did you write the lyrical components before or after the trip?
CC: The way we make music is coming from a lot of experimenting and playing around. The idea of going to a place and picking up sounds, and sampling and just putting things together, maybe play some little patterns on an oil tank or running on a bridge and then make that be the tempo. It was the first time we did a lot of those things. The idea behind them and the place where they come from is not unusual to us. We make music off of fascination of a specific sound or a piece on the piano or a drum beat. Then, afterwards comes the structure of the song. I’ll be singing a little bit on top and try and make sense. Mostly when I’m singing, I’m just scatting, like jamming on top and then trying to figure out what kind of sound and phrasing I’d like. Afterwards, listening back on tapes, I would then kind of try and make sense of what words would fit those phrases in the way I’m saving the sound. The lyric part that grows out of the sound and the phrasing of the vocal then comes the lyrical part. The written lyrics are put together quite late in the process.

L+T: So, how would you define the creation of the lyrics overall?
CC: I tend to hold it together as I am singing the parts. Most of it, I am just trying to make sense of myself. There was a great ping pong of back and forth. Basically, I would just send whatever I would sing in the microphone on the sketch. I would ask them to just write down whatever they hear. I would get all these lyrics, whatever they heard on the recordings and then I would try and make sense. Sometimes there would be some sentence that surprised me. I would try to stitch it together like a patchwork. For a lot of the songs here, even though I was just jamming on top, there were certain words and sentences that kind of stuck throughout the whole process and also ended up being the major structure of the themes of each song. We just kind of built things behind certain chorus or a line and then use the other guys to feed me with ideas of what the other sentences.