Dance music encompasses so much more than house, techno and the abundant array of electronic-based genres. Artists such as multi-instrumentalist Robert DeLong, are combining organic instruments with electronics (such as video game controllers) to create fresh new sound apart from the masses. DeLong’s a one-man band that single handedly produces, composes lyrics and does everything in between. The solo aspect is not just limited to his self-produced music. DeLong kicks his musicianship up a notch by playing completely solo live sets, which consists of drums, Nintendo Wii-motes and keyboards. Versatility can be heard through his use of pop melodic harmonies, soul searching lyrics, edgy drum notes and of course, implementation of electronic based sounds. The journey to DeLong’s debut album, Just Movement (due out February 5th), began in his childhood and serves as a stepping stone for his future.

Life + Times: When did you get your start in music?
Robert DeLong: I sort of grew up around it. My dad was a drummer. He used to play for jazz bands in the ‘60s. That musical influence was always there. My mom sang and stuff. I started playing piano when I was in 4th grade and then started playing drum set by 7th grade. I picked up the guitar along the way. I use to play in bands in high school. Jazz was my primary palette for drumming. I played jazz through college and was kind of doing the drumming thing for a long time. Then, I ended up doing this, it took off and I got to quit everything else; which is awesome.

L+T: You mentioned that you played in bands prior to your current solo project, but how did you discover the fusion of electronica and jazz? When did you start to branch out to electronica?
RD: I kind of started messing around with electronic music probably when I was 15, but at that point in time I wasn’t really aware of any electronic music. It was probably about two years ago that I started with the thing that I’m doing now. A lot of it was that I just had a lot of gear lying around and I always wanted to do a solo live electronic performance, but I had no idea exactly how I was going to do it. Over time I would play these little sets at coffee houses or whatever and the set kind of evolved into what it is. As I started playing more shows, I realized that a dance vibe for a live performance works really well. It just kind of naturally fell into what it is.

L+T: I’ve seen video game controllers and drums when I attended a couple of Nintendocore band sets, such as Anamanaguchi. However, those bands have multiple members. How are you able to manage your set as a solo artist?
RD: Well, as far as mapping out my performance, it’s sort of on a song to song basis. There are a lot of things going on in the computer (laughs). For songwriting, I write an initial song and then figure out how to play it live, and then go back to the song after playing it live to incorporate the things I’ve added to it, like the live elements. Anytime I’m using a joystick, a Wii-mote or gamepad, I try to make sure that it’s also something visually interesting to watch where it’s not just me doing something that no one would have any idea of what I’m doing. 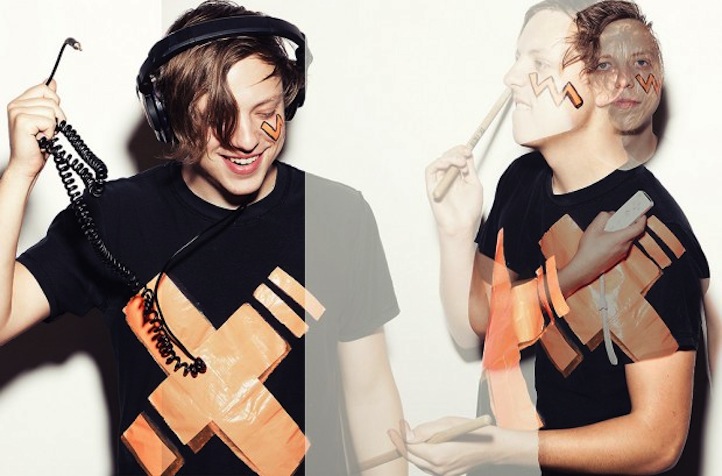 L+T: When I attended your set in the fall at CMJ, I got my face painted! When did you add the face painting to your shows?
RD: Face paint! My girlfriend started doing it randomly at some of the first shows I ever played. Some of our friends would do it before the show just for fun and everything was black, white and navy. The face paint glows under black lights. Once people saw other people with cool face paint on, it became something that they wanted to do too and it kind of just grew out of that. It’s kind of a cool thing. I find that if people have their face painted and they are dressed up for something, they’re a little bit more willing to dance to a song.

L+T: Yea, it definitely turns it into a party! Your debut album, Just Movement, comes out February 5th. Did you write and produce everything yourself or did you receive some help?
RD: It’s all me. I wrote, produced and recorded everything. I mixed it with this guy, Patrick Mundy, for a few weeks…and that was really the only part of the process where somebody else was involved. So, yeah, it’s self-produced. I think it’s pretty radical.

L+T: As far as muses and influences for your overall sound, are there any bands that you grew up listening to that you feel are instrumental in the music you create?
RD: I grew up in Seattle, so the sounds of the early 2000s, like the whole indie singer-songwriter thing. A lot of stuff like Death Cab [For Cutie] and Modest Mouse and all of that were kind of at the edge of indie. So, all of those sounds and that kind of songwriting certainly influenced me. Then, I moved to LA and started going to a lot more electronic events and stuff and picking up on the dance vibe.

L+T: Your music crosses over into multiple genres outside of electronica. When you put this album together, what concept did you have in mind?
RD: I’d say between 60 percent to 70 percent of these songs, were written between three and four years ago so they’re a little bit older. It was right after I graduated college, new found independence, period of searching or something like that. There was a score of things I was thinking about and I am still thinking about. Then, 30 percent of it was written within the last two years. I wanted to make sure my stuff kind of aligned with that whole feeling and vibe.