Usually you wouldn’t think to pair a hip-hop producer who’s worked with artists such as Wale and ex -State Property artist, Peedi Crakk, with a singer/songwriter gem from the indie rock world. However, Brent “Ritz” Reynolds and Dominic Angelella combined their distinctly opposite backgrounds to form the soul pop band, DRGN KING. In 2009, the Philadelphia based duo recorded together for the first time. “We would hang out for twice a week and then not see each other for two and half months. In summer 2010, we decided to finally record a record. It was on and off for two years,” Angelella said. During that gap in time, they released EPs and videos as segue to their debut album, Paragraph Nights. Reynolds adds, “We produced it and mixed it. It was a labor of love that took a while.” Not only is the pair touring throughout the summer and fall, but they are also working on their sophomore record. “Dom (Dominic) and I almost have a whole catalog of music together. In a few months, we’re going to start chipping away at the demos. We have a very strong starting point,” Reynolds interjects. Though Reynolds and Angelella have an extensive background in the music industry, this is merely the beginning for DRGN KING.

Life + Times: Dom, you come from a rock background. Ritz, you come from a hip-hop background. How did you two cross paths?
Dominic Angelella: There was a lot of cross pollination in terms of the rock and hip-hop backgrounds. I was in a band with Dice Raw from The Roots crew and a few other people and I was playing the guitar for a lot of different people in the city. I was producing for a lot of people in the city. We had a bunch of chance encounters. We’d bump into each other at parties. We realized we had a mutual love and appreciation for a lot of different types of music. That’s what kind of, like, brought us together.
Brent “Ritz” Reynolds: There was sort of [a] loose scene. I say “loose scene” because there’s sort of always a million things happening at one time. We had been working with some of the same artists. Even though I mostly came from a hip-hop background…we both have a pretty diverse background and our taste is pretty varied. We’re both into record collecting, so we’re both music nerds. We both like all eras. It just made sense that we eventually work together after sort of being friends first.

L+T: Ritz, you have worked with Wale, The Roots, Mac Miller and other artists in the past. Was it a hard transition to go from being in the studio to playing at live shows?
BRR: Originally it was because I never had any musical live experience. I would sort of get nervous and sort of be stressing out a little bit early on. At this point, I am much more comfortable. It’s a much more fun release than being in the studio. It’s been a nice process to get away from the studio because I am definitely in the studio all of the time sitting [in front of a] computer screen. It’s made me a better musician – overall playing live, having to know sets, especially when everyone else in the band is a very experienced musician. 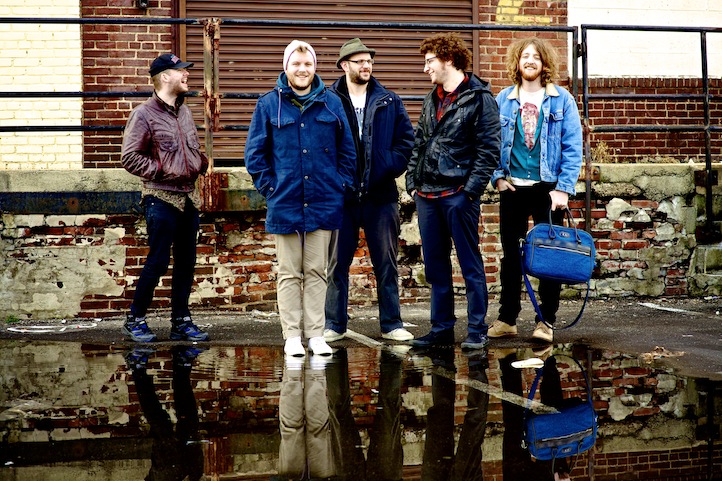 L+T: Was it difficult to seamlessly put the album together?
DA: It’s a process working with anyone intensely. We definitely went through a lot of phases in our creative process in terms of having trouble, then things working together pretty well. Brent and I have some really strong reference points where we meet up musically, so we both know how we wanted it to sound. It was just a matter of writing a bunch of songs and editing them, then making new versions – kind of like working on it like scientists.
BRR: It shifted from this casual little side project that we got up a few times and made a few songs that were cool. Then, it formed into, “We have like 20 ideas, okay, we have 40 ideas – alright, let’s form the band!” We’re going to do the second album in a fraction of the time, just because it was sort of an unusual circumstance just forming together. A lot of things happened over a few years.

L+T: Ritz, you said you both learned from each other. Separately, what was the most valuable takeaway from this project?
BRR: I’m scrambling to think of one thing, because it’s a lot of stuff – even the little things that you learn that you can’t put into words. This was the first time I worked on a project that was mostly considered rock with a lot of live guitars and drums on a lot of songs. My background was coming from hip hop and pop and R&B.
DA: I became a much better songwriter from working on this record. In the past, I would just write a song and that would just be what it was. I would very rarely update it. I would just really be into the idea of the song existing in the moment and not updating it. With DRGN KING, the song would get written and I would take the song home and bring it back and Ritz would have some notes on the lyrics, notes on the melodies, and update it. A year and a half later the song was done. So, I never did that sort of intense “workshopping.” I felt that was really, really good for my songwriting process. It made me kind of a lot better at what I was doing.
BRR: Quincy Jones said, “The best writers are rewriters.” Sometimes you catch magic and it doesn’t really need to be changed too much.