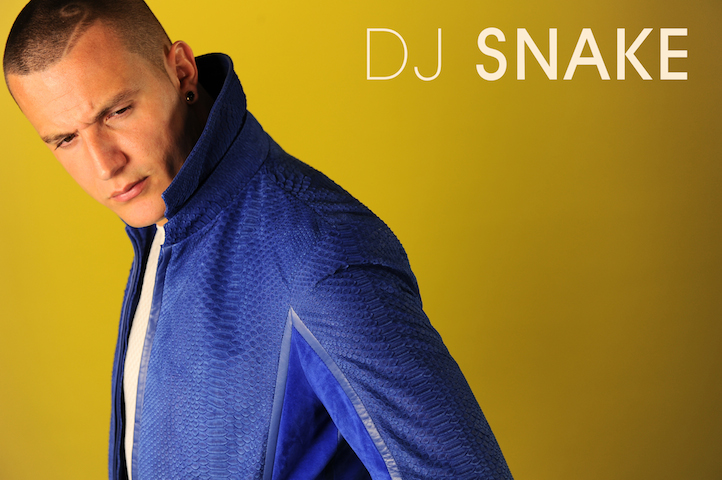 Everyone can appreciate a trendsetter within the music industry – even a hater. These tastemakers motivate fellow musicians to rise to the occasion and create something atypical to the trends. French producer DJ Snake is among the movers and shakers in the music world. Snake boasts that he wants to create the curve as opposed to being ahead of it. That bold curve has never been more evident than in the tracks he’s released this year alone. The rhythmic whistles from “Bird Machine” and the boisterous bass in “Turn Down For What” continue to be anthems on iPods and in the clubs. Not to go without mention is the Grammy nod he received for his work on Lady Gaga’s Born This Way. Snake is currently hitting select cities in US through New Year’s. When can we expect an EP or album? Snake frankly replied, “When I’m ready.” Maybe 2014 will be the year of the Snake – with a new release.

Life + Times: Some people are under the impression that you are new to the music scene. However, that really isn’t the case. Your “King Of Club” iTunes podcasts date back to 2009. When did you first start producing? Based off of your perspective, how has your style of producing evolved over time?
DJ Snake
: I basically started producing on a mainstream level in 2009. At first I was mainly focused on producing for other artists and figuring out what they wanted, but now I feel I’ve evolved into my own style and I now make music for me and what I want. For example, Lady Gaga‘s single “Do What You Want” featuring R. Kelly – the track was really about my own direction and incorporating it into Gaga’s sound. It went from “Snake strictly producing tracks for other people” to “Snake producing his vision for other people’s tracks.” I don’t want to fall into the trap a lot of producers get into in regards to catch up productions.

L+T: Catch up productions?
DJ Snake: What I mean is I don’t want to produce a song in reaction to another hot producer’s latest beat. I’m not in the imitation game. I’m in the “what kind of crazy sound can I create that’s going to completely flip the game” type of shit! I take pride in being innovative at all times. I never want to be behind the curve. I want to create that curve and make it extremely difficult to duplicate.

L+T: Did growing up in Paris help develop your taste in music? Besides your obvious interest in music, what specifically aided in your pursuit of becoming a producer-DJ?
DJ Snake: Just being in Europe, in general, I grew up around electro-dance music, as opposed to the US where it was a fairly new cultural phenomenon. I’ve always tried to incorporate those influences with my love for hip hop and all types of other genres of music that someone wouldn’t necessarily think I was into. One of the main reasons I wanted to become a DJ and make my own music was because of this one specific scene in a cult French movie called La Haine from the ‘90s. One of the characters, my mentor DJ Cutkiller, in the film opens up his window with all of his turntables and equipment set up and just starts spinning for his block – just blasting a sick routine that, at the time, no one was really doing. After watching that scene, I knew exactly what I wanted to do with life. I wanted to play music for my block, my own music.

L+T: The list of artists you’ve worked with is quite eclectic – Diddy, Pitbull, Tyrese, and T-Pain. These are the collaborations I recollect. Not to mention, you were nominated for a Grammy from your partnership with Lady Gaga on Born This Way. Consistency of your style and ideas versus what the artist has in mind – how do you balance the two so that you both are happy with the results?
DJ Snake: Right now, it’s not about balance. As said previously, I feel like I’ve evolved because I was able to let go of making songs for other artists and just put my vision into their songs I produce. I make DJ Snake tracks. When you hear a song produced by whatever artist, I want people to be able to distinguish it as a Snake beat. When Timbo produces a joint, you pretty much know right away that it’s a track produced by Timbaland. I want people to be in their car, turn on the radio, and distinguishably say, “Snake did it again.” That’s what I’m trying to do. I’m not trying to sound like the other guy. That’s not hot – ain’t nobody got time for that. I think all the great and influential producers would agree with me. You want other artists to come to you because they want your music, your vision, your creativity, and of course unique production skills.

L+T: In a 2009 interview with a Dubai-based publication, you stated, “I’m a fan of music; first and foremost, therefore I feel no barriers and no limits.” This is very evident in “Bird Machine” and “Together” with the hardstyle and trap. Your collaborations also highlight your flexibility as a producer. Particularly in America, EDM trends come in waves. Given your experience and love of music in general, how important to you is it for a producer to not limit himself or herself to one piece of the EDM puzzle?
DJ Snake: There’s nothing wrong with limiting yourself to one type of music whether it’s dubstep, electro, hip-hop, pop, or just trap. Just aspire to be the best producer in whatever genre you’re creating in. In my case, I feel music is music. If you’re a skilled producer and you have confidence in yourself, you can produce anything. What I feel separates a regular producer from a great producer is vision and a willingness to evolve with the times. If you have no vision and no passion for the present and the future – chances are you’re going to be irrelevant in today’s musical atmosphere.

L+T: With that being said, in what ways do you feed your creativity so that you don’t get caught in a rut or in the whirlwind of dance music sound-alikes?
DJ Snake: I take music very personal. What I mean by that is I feel like everyone has their own style and perceptions of music. Yes, of course there will be points when things begin to sound the same – but I feel like I have my own style. I try not to base what I make on what others do or what is popular. I just do me and trust in my own taste. You can only be the best you. You can’t be the best Tiësto because Tiësto is the best Tiësto. This is what separates me from other producers and other DJs. I’m not afraid to be my own fan, my own coach, and most importantly my own critic. People can suggest things to me and help me get to where I want to go, but at the end of the day I choose my own destiny. I make the final decision. Nobody gave me a head start in this game. I had to earn and fight for whatever I have right now. I wouldn’t have it any other way.

L+T: I feel so teased with all of the recent remixes and singles you’ve created. When can we expect an EP or album?
DJ Snake: When I’m ready.

L+T: Fair enough. Do you think a DJ is a musician?
DJ Snake: Yes, and also a maestro.