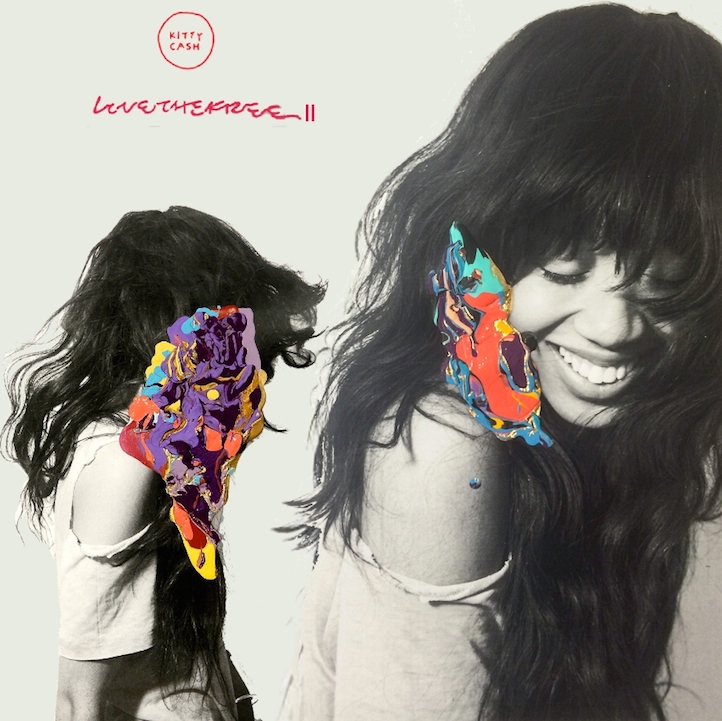 “People are so worried about knowing an artist that’s hot, but this tape gives you a chance to know them before they’re hot, see their process, see their growth and really ride with them on their journey,” says Cachée Livingston, known to some as DJ Kitty Cash, as she discusses her latest project, Love The Free II. Boasting a selection of original songs from a line-up of well-known and soon-to-be-known artists like Willow Smith, SZA, Yuna, and Dev Hynes and original artwork by emerging artist Jonni Cheatwood, the second installation of her Love The Free mixtape series showcases the Brooklynite’s commitment to discovering what’s new and introducing those discoveries to new audiences. “Love The Free is about bridging the gap and letting people feel free to accept and learn about new music,” she explains.

Though Kitty Cash only landed on the scene two years ago, she has already garnered cosigns from some of New York City’s very influential tastemakers. Last year, she received Paper Magazine‘s Nightlife Award for “Best DJ” and earlier this year, she was listed as one of NBC’s The Grio’s “Artists to Watch of 2014.” Also, when she’s not DJing for the likes of Solange and Kilo Kish, she’s handling publicity for G-Star RAW. The combination of the reputation she’s been building, her love of most things hip hop and R&B and her keen sense of fashion is positioning her for a reign reminiscent to that of Downtown’s sweetheart and everybody’s favorite fly girl, Va$htie. Life + Times sat down with DJ Kitty Cash to discuss her latest Love The Free mixtape, her journey as a DJ and how she juggles two careers.

L+T: What’s the meaning behind the title of your mixtape series, Love the Free?
DJ Kitty Cash: I thought of the name about a year and a half ago or something. I was on an European tour with The Internet and Kilo Kish at the time. We were joking about the fact that you get free shit when you’re on tour, so we were just playing around saying “love the free.” This was around the time when I realized that I really loved DJing and that it was something I really wanted to be respected at. I was like “Dude, how am I from Brooklyn and I haven’t put out a mixtape? I’m supposed to be DJ!” I felt like no one was going to take me seriously if I didn’t have a tape out there. Once I realized that I was going to put the first mixtape together, I said since I kept saying “love the free” that that would be the title of the project.

L+T: How did you select the songs that would appear on Love the Free II?
DKC: The process took four months. Everyday I would write notes on who I liked or who I wanted to work with. If I came across a new artist I would note that also. Then it was me going through all of these songs that artists were sending me and playing them on the train and in a car and getting a feeling from them. That’s how I figured out which songs would make the project. In no time, I had about forty songs to choose from, so of course a few songs didn’t make the cut. There were a lot of records to choose from, so I just went with what I liked. Some of the people on Love the Free II are people I wanted on the first tape that I couldn’t get in time or that I didn’t have enough space for. That’s also how some of the songs made the tape.

L+T: Were you involved in the creative process for any of Love the Free II’s songs?
DKC: Artists may send me a few selections, but I’m reaching out to artists that I feel have a very specific aesthetic . I want them to have fun with it, be as creative as possible and to do what they do best. I’m reaching out to these artists, because I like them and what they do, so I’m not trying to change or alter what they’re doing. With Love The Free they’re showcasing what they already do.

L+T: So far the Love the Free series is a solid mixture of alternative, r&b and hip hop music, but would you ever consider doing a mostly hip hop mixtape?
DKC: I wanted to do a hip hop tape, but it’s a little bit more difficult when you want to work with rappers. I would love to do a hip hop project though.

L+T: How did your career as a DJ begin?
DKC: One of my best friends is Kilo Kish. She was about to go on her first tour and was looking for a DJ. We would go to all these downtown spots looking for a DJ, but just couldn’t find one. One day she was like, “You should be my DJ.” I told her I didn’t know how to DJ and she was like, “You can try.” We were going back and forth and then she said, “You get to go on tour with me.” That’s when I said okay [laughs]. I hit up J. Scott, who was A$AP Rocky’s official DJ and Kish’s manager. He gave me a crash course in DJing. Then I took a course at Scratch Academy. I’ve been figuring it out ever since.

L+T: How did you get the name Kitty Cash?
DKC: That was also a joke. My real name is Cachée and my friends and family all call me “Cash.” I didn’t want just anybody calling me something my family calls me. Actually, that same night when we were talking about DJing we were with a few friends, including MeLo-X and I was like if Kish was going to be “Kilo Kish” I couldn’t just be “Cash.” We all started thinking of something to put in front of “Cash.” We were bouncing names around a lot. At the time, Kish was meowing a lot and I’m really not sure why, but we ended up with “Kitty Cash.” I thought it was so dope. It’s cute, but sexy. It’s just so me. It’s so weird, because who would’ve thought it was going to stick.

L+T: Aside from DJing, you’re also a publicist for G-Star RAW. How have you been able to have your two worlds coincide?
DKC: I feel like they go hand in hand anyway. Music definitely influences fashion and vice versa. I usually premiere my tapes on a fashion platform. The first was with Vogue and the second was with Elle. It’s basically me using me and my network as a platform for my collaborators, who may not have normally been featured on Elle or Vogue. Being on this tape gives them an entirely different audience to present their music to. That’s really important to me.

L+T: You seem to love both, but do you see yourself ever choosing one career over the other?
DKC: I feel like we’re all on a journey and there’s always going to be forks in the road and decisions to be made. Life is about choices and growth and what is meant to be will be.

L+T: Do you see yourself ever working as closely with an artist as you have with Kilo Kish?
DKC: I’ve never really thought about it in that way, because Kish is like one of my closest friends. Our synergy and chemistry is amazing. We don’t argue. I know when she needs space and vice versa or like when she needs someone to be her hype man or just be there for her.

L+T: Has there been a moment where you were like “Wow. I really do this. I’m really a DJ!”?
DKC: There were a few of those moments. I was on tour with Kish and we did a show with SBTRK that was like underneath a bridge. It was insane. After the show Kish had gone back to the room, but I stayed out. That was the night when I said I needed to be great at this DJing thing, so that I could keep doing shit like what I experienced that night. I had the time of my life that night. At that point, I realized that I wanted to really do this. There were other moments also, like when I DJed a Fashion Week event for Solange. Beyoncé had walked in right when I went on. I had about fifty or a million thoughts in my mind within like five seconds. I was wondering if I should play a Beyoncé song or something [laughs]. I didn’t know what to do, so I just started playing. I had my drink, which I probably finished in one sip. I then looked to my left and Beyoncé was just getting down and having the time of her life. I was so hyped, like “Oh my god, B is getting down to my set!” I know the decision to DJ was random, but moments like these have me believing that maybe it was really meant to be.

L+T: What’s next for Kitty Cash?
DKC: At some point as a DJ you have to figure out if you want to do this forever or if you want to grow and do something else. I feel like my next step is definitely production, because I really enjoy collaborative projects. When you produce you can work with new people and build on these ideas, so that’s kind of what I want to do next.