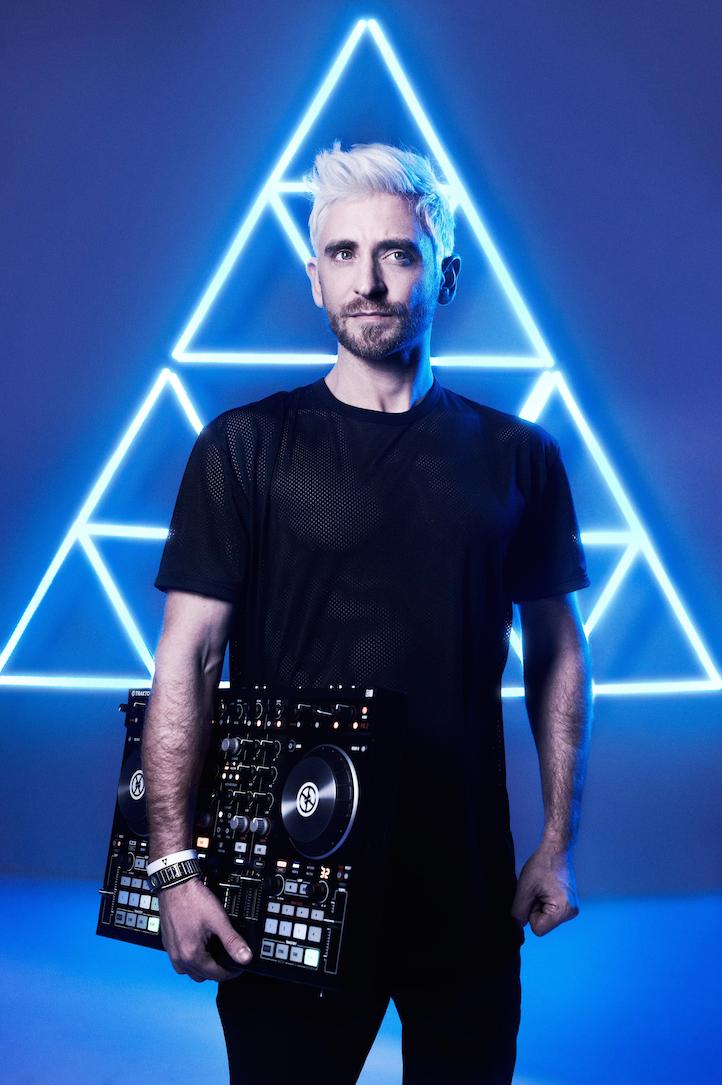 Hearing Daniel Stein, commonly known as DJ Fresh, enthusiastically recall some of the top tier moments of his career is infectious and motivating. The British DJ-producer has tried and tested just about every facet of the sounds electronic dance music has to offer ranging from his initial drum n’ bass days in Bad Company to dubstep (“Gold Dust”) to his most recent club ready rework of “Flashlight,” featuring Ellie Goulding – and beyond just these three examples. Dan has spent the past year writing and producing the follow up to 2012’s Nextlevelism. The album has already dropped three hit singles including the Diplo collab track, “Earthquake,” “Dibby Dibby Sound,” and “Make U Bounce.” Here, Fresh speaks to us ahead of his music video shoot for “Flashlight.” What’s more impressive than the actual Skype phone call itself? Fresh continues unhindered in conversation throughout his entire dye appointment at the salon. Hey, platinum blonde hair requires much maintenance.

Life + Times: How is your album coming along? Do you have a date set yet or is that still pending?
DJ Fresh: I’m not quite too sure of the date, but mostly because I’m terrible at looking at my diary. That’s the main reason. I don’t know what the date is, but I think it’s towards the end of the year. It’s gonna be more of a – at least the UK version of the album – dance music compilation rather than like an album that’s gonna take you on a journey. It’s just gonna be packed full of new, slamming club tracks.

L+T: Well, I’m looking forward to that. On this latest single, “Flashlight,” it’s actually featured on Ellie’s album (Halcyon Days) as well. What made you decide to do your own version of this track for your album?
DJ Fresh: We’d always kind of been planning to release the single, but Ellie loved the track so much that she wanted to get it on to her album. At that stage, the version that we had was cool, but it was like an album version. So, I had the chance to go in on it and develop it as a club track which we kind of re-recorded a bunch of vocals and added new sections to it. So this is kind of my style of version, whereas the version that went on Ellie’s album is kind of a little bit more of an album track.

L+T: Cool. You tweeted a quote the other day that I really loved – “Don’t climb a mountain to get to the top. Do it because you enjoy the climb.” So, as an artist how are you able to do that while maintaining a measure of integrity creatively? I understand as artists have to be able to appeal to your fans, but how are you able to produce music that you’re also proud of?
DJ Fresh: I came from a very driven kind of background. My family was always very about doing the best that you can and struggling to kind of realize your goals and not taking ‘no’ for an answer. So, that’s been a massive part of my kind of headspace really with everything that I’ve done. But I guess at the same time it’s really important to enjoy the path that you’re on as well as just focusing on where you’re trying to get to.

L+T: That’s true. You’ve definitely had some really awesome moments. I know you’ve been producing and deejaying for two decades now. You’ve come a long way since your Bad Company days. I’m sure you have many memorable moments, but give me a highlight from your producing career.
DJ Fresh: There’s been so many to be honest. There’s been quite a lot of moments I guess like over the past five or six years where I’ve kind of had to pinch myself, you know. I remember doing a gig that now seems like a small gig compared to what I’m doing at the moment. At the time it was five or six thousand people and this was when my first UK #1 single came out, “Louder,” and I went up on stage and the crowd was like chanting my name and stuff. It was really cool. It kind of felt like that because I guess I’ve been kind of seen to some extent as being a figurehead for bass music and drum n’ bass, especially in the UK. And it really felt like those people there were like celebrating not really just me and my track, but the sort of breakthrough that was happening for dubstep and drum n’ bass with that track and it was just a really special moment. I’ve been lucky where I can count a lot of moments like that…because I have worked really, really hard. That’s really for me at the moment that feels like it pays off when you get to try and make a change in behalf of all these other people that love the music you’re standing behind.

L+T: That’s great. And although obviously, I’m not a producer, I kind of can relate to you in a sense that I started out in fashion and transitioned into music journalism. Getting out of that comfort zone, you know. With that being said, did you ever see yourself being a producer that would extend himself outside of drum n’ bass music?
DJ Fresh: It’s pretty wicked. When I first started there was no I guess what you can call “EDM” which is, like, quite heavy dance music, but not like in the charts was supported in the radio and MTV. So, at that point in time I was very anti-pop music and I was trying to push what I was into and what we were into on the underground and that started to become part of mainstream pop music now. Everything’s changed. So, it’s really weird. As much as I wanted it to happen and as much as I wanted to be part of the group of people in making that happen, I never really expected it to happen. You know what I mean? It’s like when you make a wish, you don’t actually expect for it to come true. It’s really amazing. It’s really great to see the way the musical landscape is changing around the world with dance music. The type of music that I grew up on is now part of the landscape. Like if somebody would have said to me 15 years ago, “You’re gonna be in the charts,” I would have been horrified because at that point the charts meant mass-produced music. What makes up the charts is changing. One day I can go into a room and make a track with a singer and that can become a massive anthem that’s played all over the world.

L+T: Yeah, and the musical landscape even within dance music’s subgenres is constantly changing. It makes me think of the “purity” of certain subgenres such as house, techno, and so forth – do you ever think now that things are constantly evolving that those authentic sounds will ever just disappear?
DJ Fresh: Like in the ‘90s to now everything was like super segregated. You wouldn’t catch a DJ or producer that made one style of music trying or making something different. I think that’s just evolution. I think it’s positive to see. I know as someone that’s been making music for quite a long time compared to some other guys that have sprung up over the past couple of years, it’s really frustrating to keep narrowing your ideas down to such a narrow framework. I don’t really think that’s healthy. I think it’s great you’ve got these people whose talents you can enjoy; and you can explore that talent and hopefully along the way go through stages of going through discovering and unlocking parts of their creativity that can bring the listener a new experience.

L+T: Yeah, I agree. As a whole I feel like listeners are fairly open, but then you have those that are like, “Okay, that producer always produced house music. Why is he now producing dubstep?” You have to evolve as a person and an artist – not just in one way.
DJ Fresh: It’s kind of weird to me because I grew up on bands like Rage Against The Machine and kind of like the punky element like of what was around me when I was growing up. I guess the more the people have said that I shouldn’t be something, the more it makes me want to do it. It just so happens that I’ve always wanted to make lots of different genres of music. When I hear people saying you can’t do something, it makes me want to do it even more.

L+T: Good! That’s exactly how I feel also. Now for my last question I end my interview with every producer: Do you think a DJ is a musician?
DJ Fresh: Umm. (Pause) Well, I don’t know. It depends on how you define DJ. I mean I really wouldn’t call myself a DJ for whatever that means. I perform music electronically live with, like, the modern equipment and a pair of decks. Like DJs don’t make music? I mean, if you said to me a “producer” like the way that we understand in dance music producers is a musician, then I would say ‘yes.’ Like Jim Morrison once said, ‘one day there will be guys that will just sit in a room of their own and make music on computers’ and that is probably what he would be doing if he was here now. So, admittedly, I think that shows it’s an evolution in the same way that everything in our society is embracing technology. Music is embracing technology and it’s surprising and shocking, new, and exciting.

L+T: And he hit it right on the head. Morrison was a prophet.
DJ Fresh: Yeah, he was. (Laughs) And you know who else? Prince. Two great musicians in my opinion that both had that same view.