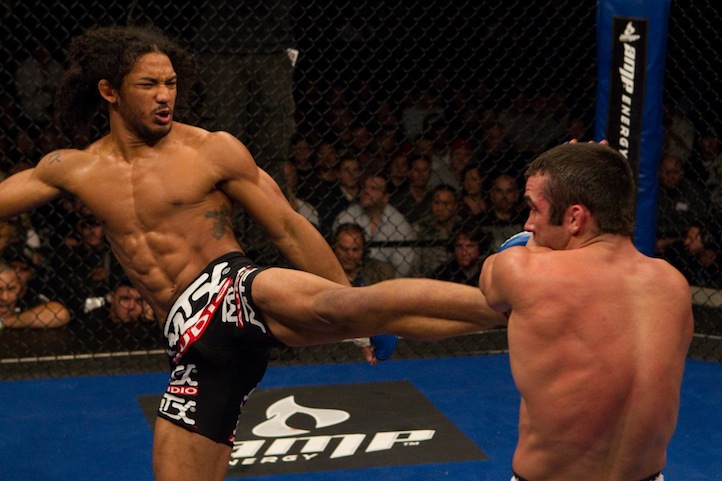 Everything that the UFC’s Benson Henderson has accomplished in his 27 years of life has been the result of career choices that he stumbled into; none of which were in his initial plans. Some may call it chance, but for the devout Christian who was raised in Tacoma, Washington, Henderson says his success has always been God’s will.

“I was raised in the church, so religion plays a big role in how I train and conduct myself on a day-to-day basis,” Henderson explains of his Christian foundation. The man who is preparing for his UFC debut on April 30th, when he faces jiujitsu specialist Mark Bocek at UFC 129, might not have ever been in this position if the chips didn’t fall in the manner that they did.

Like many kids raised in humble beginnings, the undersized child of a Korean mother and African-American father grew up wanting to be like Mike. Unfortunately, Henderson’s dreams of hitting game-winning jumpers in the NBA were dashed when he didn’t make the cut on his high school basketball team. But, as they say, when one door closes, another opens. And somehow Henderson found himself in a room where size didn’t matter.

“Tryouts for basketball didn’t go well so I just wandered into the wrestling room while practice was going on,” the man nicknamed “Smooth” reflects. “One of the coaches just yelled for me to take my shoes off and get on the mat. From there I just fell in love.” Although he would be teased by his buddies for having to wear the wrestling uniform known as the singlet, Henderson quickly realized he was a natural. After being a star wrestler at Decatur High School in Washington, Henderson excelled at the collegiate level and was named NAIA All-American twice, while also managing to acquire a dual degree in criminal justice and sociology at Dana College in Blair, Nebraska. He would exit college with jobs at both the Omaha and Denver police departments on the table. But divine intervention came calling again and changed the course of his life forever.

While awaiting word from the police departments in 2006, Henderson was helping train wrestlers at his alma mater. One evening after practice, a friend dared him to try his hand at mixed martial arts. Rather than being called a punk, Henderson took the challenge. He didn’t realize that a series of MMA bouts would be taking place in downtown Omaha that very night.

“I was caught out there,” Henderson explains. But being a competitor wouldn’t allow him to back down from the challenge. “I ended up taking a fight that night and thankfully I got my hand raised in victory. So I decided to give MMA a try.”