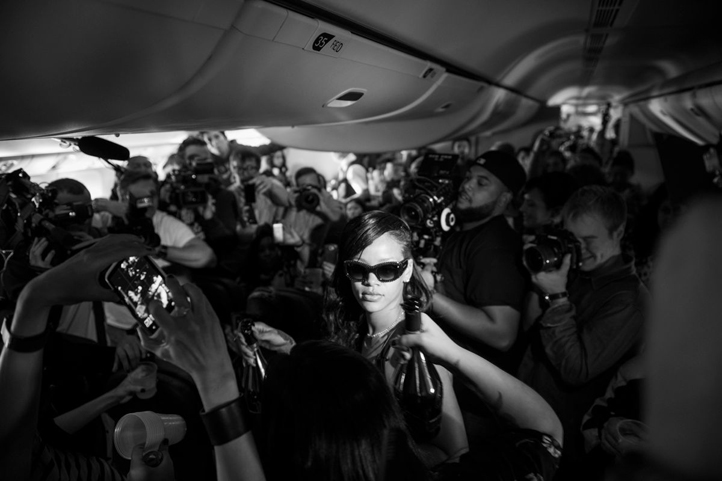 Rihanna’s whirlwind 777 Tour comes to an end tonight at Webster Hall in New York City. Spanning seven shows in seven cities in seven days, the pop star’s unprecedented trek—in support of her seventh studio album, Unapologetic—began last Wednesday in Los Angeles. From there, she embarked for the first stop in Mexico City at El Plaza Condesa, an intimate venue littered with teens whose boundless energy sent the tour onward in promising spirits. All 250 people aboard a Delta 777 twin jet included. 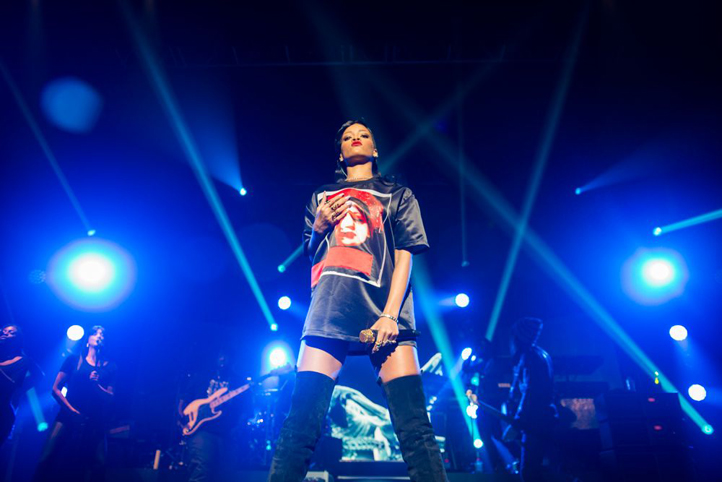 Beyond Rihanna’s sizable entourage of management, creative, band, and production, a press corps of close to 150—from French TV outlets to Brazilian magazine writers and New Zealand radio hosts—has been following aboard. True to Rihanna’s word, all involved experienced firsthand a “rock n’ roll fantasy,” or rather, the life on the road for a touring international icon: the routine of airport, venue, show, after-party, hotel (of course, one of the world’s most luxurious for a quick nap), and back to airport. And repeat. It’s 5 to 9 living—p.m. to a.m.

The 60 minutes every night when Rihanna commanded the stage gave the effort and adventure its purpose. Regardless of the setting—whether it was the baroque opulence of nightclub Berns in Stockholm, the hollowed balconies of Le Trianon in Paris, or the industrial confines of E-Werk in Berlin—all in attendance bore witness to Rihanna’s amazing duality, an innate ability to lose herself in every song, pulsating or slow, house-y or balladic, and then return to her cool, casual self, constantly riffing with the crowd between songs. It was a common, dominant theme—as were the trembling dancefloors on the verge of collapse by the time “Don’t Stop The Music” dropped midway through, every night on cue. 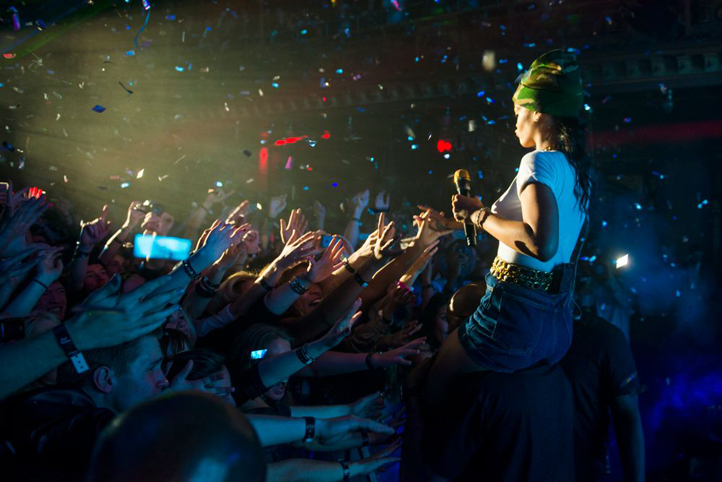 Last night, at show six in London, Life + Times caught up Rihanna’s Musical Director Adam Blackstone–an industry veteran who’s also directed the likes of JAY Z, Janet Jackson, Drake, and Nicki Minaj–to discuss the intricacies that go into a production like the wild ride that is the 777 Tour.

L+T: Seven shows in seven days. You’re used to touring but even this is something new.
Adam Blackstone: It’s been exciting, scary, tiresome, mayhem, monumental, epic all in one, based off the tour schedule and the routing. I’ve done a lot of shows in a row before—we just did Barclays with JAY Z, which was another historic event—but I’ve never done that amount and gone from Toronto to Stockholm to Paris to Berlin, so it’s been real, real crazy. It’s gruesome, yet historic at the same time. 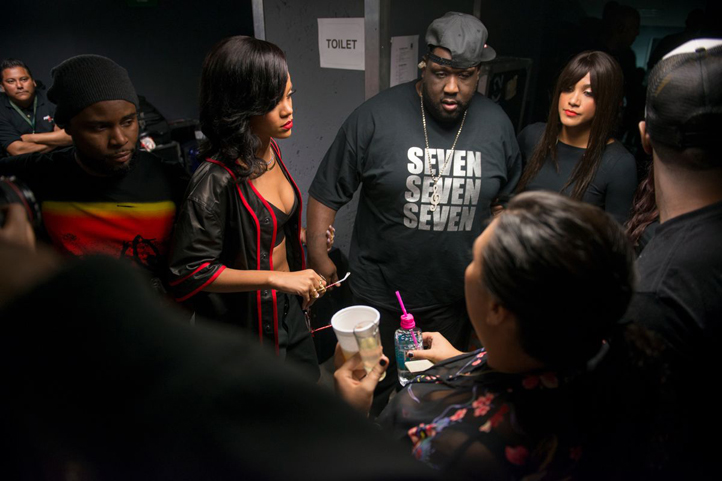 L+T: These stretch of shows are intimate affairs in smaller venues. What kinds of things are involved with scaling back a stadium act to work in these settings?
AB: Well, Rihanna’s still a pop star. What we’ve done is shorten a lot of the songs, so we play more songs that her fans are able to like. Her fans love her records, so the more that we can put in that’s recognizable, that’s what we try to do. These shows are more about condensed, short, but effective performances.

L+T: For the creative diversions in the set, such as adding Shirley Bassey’s “Diamonds Are Forever” as the intro to “Diamonds,” how do those happen?
AB: With “Diamonds,” that was an idea that [co-Musical Director] Omar Edwards and I came up with. “Diamonds” is still essentially a new song—it’s number one right now, but it’s still a new song—so with her affiliation with the Roc and all that, we wanted to try and make it relatable to new ears.

L+T: Talk to me about translating the more house-based records, like “We Found Love” and “Don’t Stop The Music” both live and to the people.
AB: It’s two different beasts, mainly because live, we have to emulate these synth instruments that are on track, so that’s when programming and attention to detail comes in, such as making sure the drummer’s not playing acoustic drums and drum fills on top of those records. People wanna hear their records…how it is. So, those types of songs, we do a little less arranging with because they play themselves. People jump around and know the words. If you switch up a hit song too much and make it unrecognizable, people are not going to necessarily be as into it as they would be if they just put the CD on. So making those records stand out is really about “less is more.”

L+T: As Musical Director, what do some of your other responsibilities entail, especially in terms of splitting duties with Omar Edwards?
AB: We have a great working relationship, man. He’s also very busy—he’s JAY Z’s Musical Director, while I’m out with Maroon 5, Janet Jackson, etc.—so what we do here is attack different things at the same time, so it gets double the work done. If I’m programming music, then he might be programming sounds. He may be talking to Ri about the arrangement, while I’m working on edits. He could be talking to management on a business conversation, while I’m talking to our travel party to make sure we’re all good with wardrobe. It’s an effective team that we have and I’m blessed to have him as a partner.

L+T: Last thing. How was JAY Z’s Ohio gig for Barack Obama the day before the election?
AB: I didn’t do Obama. I was in Abu Dhabi with Eminem. So Omar did that one. But Obama’s a good guy–I met him before when JAY Z played at the rally before his first term. I believe in his change and what he’s doing for America. JAY bought into it early on, as well, so whatever we could do to help him gain those four more years, we were down to do it. He won again—I like to think that that Jay concert had a lot to do with that (laughs).