New York City’s Rock scene has many layers. While the re-introduction of things like synths plus new technology has muddled the specificity of the genre, it’s allowed for a variety of music to enhance the scene and take the most talented to the top. The Dirty Projectors found a home within this scene many moons ago. Led by Dave Longstreth, the band has consistently taken their style and sound through a variety of turns during their seven-album stint. Their latest Swing Lo Magellan is arguably the deepest, where lyrics sit at the heart of the project and all else accompanies them. In a musical landscape that currently promotes production over poignancy, it’s a bold move for Longstreth and his band. Life+Times checked in with Dave Longstreth as he anticipates the July 10th release of Swing Lo Magellan. He talks about working with Bjork, and his decision to keep it simple with Swing Lo.

Life+Times: This time around, what was kind of your thought process or the band’s thought process coming into this new project?
Dave Longstreth: Well you know, after all of the touring that we did on Bitte Orca, you come away with this feeling that playing music for people is just one of the most amazing and lucky experiences that you can have in the world, and that you want to be giving something of great value to the people that you played to. In a way, you want to feel the way they feel as you’re playing. And so you know, to the extent that Bitte Orca is this collection of ideas or something like that, that was interesting. I feel like the best songs are way smarter than whatever dumb ass wrote them. To the extent that some of Bitte was really this ecstatically, intellectual music, it’s only as smart as me or as us and the band. And I’m a fuckin’ dumb ass, you know? It’s true. And so with this album, I really wanted to try to use just the simplest tools to say something simple. As simple as I could, as basic as I could. The gamble there is to see whether in doing that, there would still be something that was kind of irreducibly personal or true to me in the music that came out of it. So that was maybe where these songs come from.

L+T: It’s interesting that you chose to strip down your formula at a time when music is so full of bells and whistles.
DL: You know, that’s another part of it. I look around and I see music that’s all veils and vapors and impressions and clouds and silt, you know? Even over to look at the Chris Brown‘s and the Rihanna‘s…music is so impressionistic. It’s so abstract – it’s sort of like a perfume that you might choose to wear on a given day or cologne or something. But for me, I wanted to make a stone, a rock that you could kind of hold in your hand and maybe throw.

L+T: What was it that you think about Bitte Orca that really just…I don’t know…on a mainstream level, I guess took you guys to the next level? What do you think it was sonically or just on a larger scale that just made it pop the way it did?
DL: You know, I think that I was getting better as a songwriter. I think that’s one thing. But I also think that with Bitte, I was making an effort to present an emblem of the band that we had become in touring for the prior two and a half or three years. That entails this self-awareness that comes with making a self-portrait. It was kind of a caricature of a certain kind of rock band. I think maybe what resonated is that a rock band in the late 2000’s…2009, 2010, 2012…a rock band is a caricature because that’s essentially a closed cannon.

L+T: Were you totally freaked or crying when you found out that you’d be working with Bjork on Mount Wittenberg Orca? I mean, I cried for you when I found out that was happening.
DL: That’s amazing. It was amazing. I mean she is an incredible woman and an incredible artist, you know? Both of those collabs, it was like collaborating with some sort of artistic mother and father in the songs that David [Byrne] and I wrote, and then in writing the music for Bjork and the ladies.

L+T: Her voice fits so perfectly with everything as well.
DL: I know, I know! Well, you know, her voice is like any music you love. Her voice is kind of like a part of me in some way so it wasn’t really hard to write music for her voice.

L+T: So the album art for Swing Lo Magellan, it looks like there’s a guy playing air guitar for two tourists. That’s what it sort of looks like to me.
DL: [laughs] I can see that! 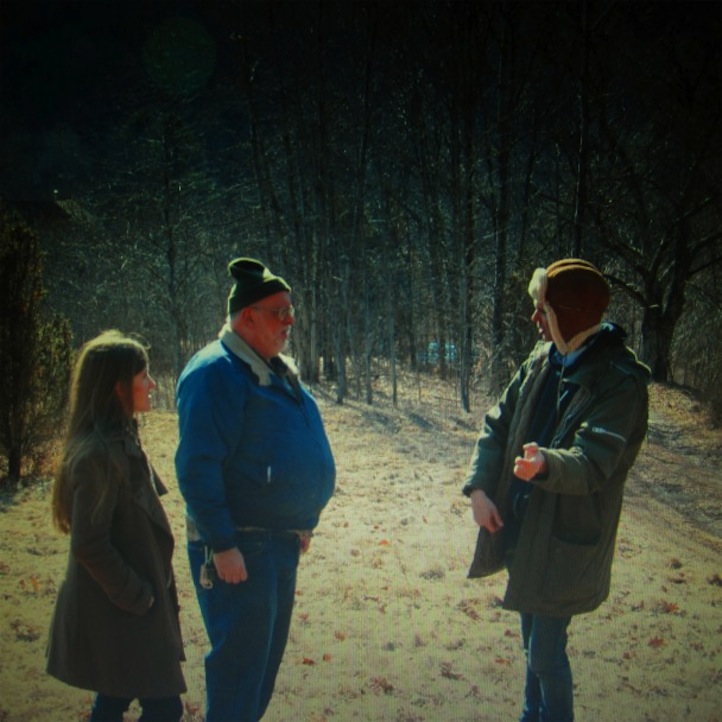 L+T: What is the story behind that photo?
DL: Well, it was taken in the driveway of the house where we recorded the album. The house, it’s spent a fair amount of the last 15 years pretty much abandoned. Hunting is a big thing up in that part of New York State, and at one point I think the owners of the house had operated it as a B&B for the beginning of open season. So all these hunters knew about this house with this kind of deck in the meadow where lots of deer came and chilled out. And subsequent years they wouldn’t do the B&B so these hunters would just roll down here and post up in little deer stands on opening weekend and just like, mass murder style. So this guy was just up in the driveway, and Amber and I went up there to talk to him. I don’t know if that’s what his deal was. He might have just been peeping the scenario, I don’t really know. He was a really nice guy. But yeah, my brother was there taking photos, and we came across that one photo. It was just one of many that he took that day and I immediately thought it would make an awesome album cover.

L+T: It is awesome. And it looks very simple and to the point, kind of like how you’re describing your approach to the music.
DL: Cool! Yeah, yeah I just felt like it was a match.

L+T: When Solange covered “Stillness Is The Move,” all of a sudden your music was showing up on random hip-hop blogs and stuff like that – after a while when people became hip to your band. Are you noticing a change in your audience since that time?
DL: Umm, maybe. Yeah maybe a little bit. I think a bunch of stuff from the last couple years has really broadened who listens to the band. It’s a band that takes in a lot of different pieces of the culture and spits them out in a weird fucking mélange. But I loved Solange’s cover so much. It was incredible!

L+T: It was really good. So what did you listen to when you were growing up?
DL: Oh, all kinds of shit. The Beatles and Black Flag and Motown and Bach and 90’s hip-hop and stuff like that.

L+T: You said that you were taking more of a simpler approach in the whole process with Swing Lo Magellan. Listening to the lyrics though, it seems like they are still very, for lack of a better word…complex. Like there’s still great depth to the lyrics. It’s a really heartfelt album. Did you get to the core of that by kind of stripping away everything else?
DL: Yeah! I guess there’s some metaphors too in the lyrics. I guess there’s some of that. But by and large, you listen to like Bon Iver or something and it’s like there’s not a single discrete thought on the entire album. It’s as if John Ashbery suddenly taught all the Creative Arts courses in the world in the last ten years or something. It’s insane! Maybe that lack of specificity just enables this kind of porous, Facebook method of absorption where anything can mean anything to anyone. And maybe it’s just because I’m a polemic bastard, but with this album I wanted to…at the risk of just sounding like a total dumb ass…I wanted to try to write about things that I was thinking about.

L+T: In coming up with the band, what was one of the worst venues that you guys performed in?
DL: One of the worst venues? We played in a gay strip club in Manchester one time. And that was cool. I mean it was fun, but it made us kind of rethink our European booking agent.

L+T: So that was the best/worst place you ever performed?
DL: I think it might have been. Best worst! I mean God, there were a lot over the years but that might take the cake just because it was so absurd.

L+T: Have you had any creepy fans yet do weird stuff?
DL: I had somebody give me a Book of Mormon when we played in Salt Late City one time. He was just like, “I really love your tunes. I really love the spirit of what you’re coming from and sometimes I worry about your soul. I wanted to give you this book.”

L+T: What’d you do with it?
DL: We kept it in the van. We’d read passages of it on long drives.

L+T: What other cities are you hitting?
DL: Oh, all of them. No, it’s going to be a pretty good tour of North America. I think it’s about six weeks. So we’re going to start up in Canada, come down, play New York. Go out, Chicago. West to the West Coast, down, across. You know, Texas and some of those Southwestern cities. Austin, Houston, couple dates in Florida, which I’m psyched about and then rolling back up into the Rust Belt where I think we finish.

L+T: So you’ll be keeping pretty busy.
DL: Oh yeah. Yup. Then after that we’re actually going to Europe, so that’ll be really cool.