Last week’s private set atop The Standard in New York’s East Village consisted of radiant sunshine, well-dressed tastemakers and the introduction of a gem from the South. Hailing from Durham, North Carolina, Delta Rae, the six member band that enamored the crowd with their larger-than-life performance can best be described as genre defying. Their set bled of sultry vocals from the soul amid an overlay of cross genre sounds that lie somewhere between blues and Americana with a hint of R&B. The band’s music even motivated producer/artist, Pharrell Williams, to recently tweet the following comment: “Stop what you’re doing right now and go listen to Delta Rae. Unbelievable!” In fact, this year has certainly proved to be unbelievable for the sextet in that they were signed to Sire Records, released their first album, Carry The Fire in June and are currently touring the country until November. Life + Times caught up with Eric Hölljes and Brittany Hölljes, both siblings and bandmates of Delta Rae, to discuss how they ended up in their current adventure.

Life + Times:  I noticed you guys come from a musical background in your childhood, right?
Brittany Hölljes: Kind of, yeah!

L+T: How would you say that your background shaped your sound now?
Eric Hölljes: It’s been really influential. So, our parents are both very creative. They are not particularly musical I would say. They both sing around the house, but we grew up in a house that was always playing great records and I think that music really lodged itself deep within us as writers and performers. So, it’s been very influential. Billy Joel, James Taylor, Peter, Paul and Mary, Fleetwood Mac…who are the other ones?
BH: Cat Stevens, Chris Isaac, Joni Mitchell, Janis Ian.
EH: There are a lot of singer-songwriters.
BH: Well, their storytellers…in that style of music. I think also, we had musical family members, like extended family. My uncle on my mom’s side is a blues musician out of Georgia. My aunt is a fabulous vocalist. We would get together with that side of the family and sing. My dad’s side of the family has a good ear too and huge lung capacity. They’re all like Viking stock.
EH: They’re all over 6’4”; all seven siblings on my dad’s side of the family. So, it’s a huge group of people and they all have very big voices. 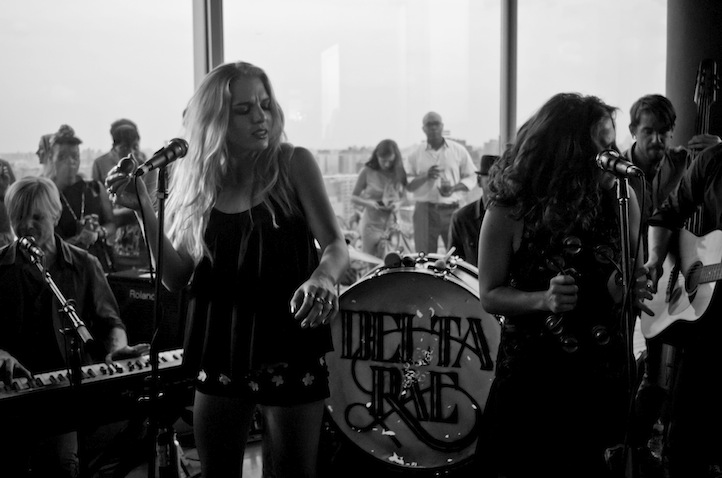 L+T: So, it was inevitable…
BH Yeah, so essentially we got some of the ear, some of the lung power and also we were very lucky to have wonderful, encouraging, supportive parents. Ian (the oldest brother and fellow band member) jumped up on stage at a very young age in my mom’s total horror. Ian’s the eldest. She’s had some stage fright when she was younger. As soon as I watched Ian perform in Oliver when he was like, ten, I was just like, “Me! Get me up there! I would like to get flowers at the end.” I was enthralled and totally excited by everybody’s reactions to the play even more than about my own. It is fun to watch the interaction of performers and the audience. So, I think it’s been an early fascination and was nurtured very well by my parents and now it came together, finally.

L+T: You mentioned storytelling and we were just discussing inspiration via singer-songwriters, on your album, you have a ton of lyrics that have a lot of meaning and depth. With there being six members, how do you collaborate on songs and decide what will actually be a song? Do you write them separately?
BH: My brothers are the songwriters for the group. Eric will tell you his process.
EH: It’s very much what you (Life+Times) just described. We write separately and then come together with ideas. What usually happens is either Ian or I will have an idea and we’ll follow it until we hit a roadblock in which we do not know if we should go left or right…write a sweeping chorus or go into another verse? “What should the song be about?” We’ll bring it to the other person and just discuss it or sing it for them and see what their instincts are or if it’s even an idea worth pursuing. Once you bring it to them, you usually can work through that roadblock, but then the real work is done, again, in isolation and brought back under the microscope with one person in a locked room and they’ll emerge again with something that’s stronger than what they went in with. I think it’s that back and forth. Then, at some point once the song is sort of standing on its own, we’ll bring it to the band and work in the drum parts, the bass parts and vocal harmonies that we love to add and really make it a Delta Rae song.

L+T: With that being said, how long did it take you guys to produce your debut album?
EH: We waited two years to record it, to go in the studio and record it. It took a month to record it and probably another four months of post work to get it mixed and mastered just the way we wanted it.
BH: But it was a long time in coming…the creative process and the fundraising and all that went into it on the front end was what took the two and half years.

L+T: I was just about to ask about that. $28,000, right?
BH: Yes, from Kickstarter and even more than that from other donations.
EH: Some people missed the deadline and still wanted to contribute. We ended up with closer to about $34,000 or $35,000. It really was amazing! We were enthralled and really overwhelmed by the response. We had low expectations, if any, and our fans just totally blew us away. It made the whole process a lot more fun and a lot more worth it.

L+T: I thought that was amazing too! Especially considering this was all accomplished without the aid of marketing or a publicist and all these things that typically go into the process.
BH: We were at such a different phase in our career when that happened.
EH: It’s funny because it was not even a year ago.
BH: I look back at all those people who were fans then and are totally diehard fans now. I am so grateful for them. How amazing for people to look at a scrappy band like ours from Durham, North Carolina and say, “I want to give above and beyond to these people who I believe what they’re doing.” I am so flummoxed by that…I am just floored by the generosity. It’s not that I don’t wholeheartedly believe in what we’re doing. This is a dream come true. How could you possibly…you barely know me, and yet you are onboard with my dream? That’s amazing. So, it’s still hard to get over. Without those people we would not be able to be here.

L+T: How did you actually get in a meeting with (Warner Music Vice President) Seymour Stein? How did he even hear about you?
EH: Very obscure.
BH: I always say our manager, Adam, who sort of loves music and is extremely outgoing.
EH: He’s a buddy of Ian and mine from college.
BH: He had no band managing experience before he signed on with us. He’s extremely skilled in a lot of ways, but he also has a way with coincidences. He’s good at them. I don’t know how he does it.
EH: To get to the story, he’s a buddy of ours from Duke. These two fellow Duke students, their dad is a doctor at Duke. He’s a very prominent, world renowned neurosurgeon at Duke. Adam reached out to him. We’re based in Durham, North Carolina. Adam reached out to him just to ask if he could introduce him to some people in Durham because he was new to the area and told him he was managing this band and would love to meet for drinks and said “your kids are great.” So, the doctor, his name is Dr. Friedman, responds, “I never do this, Adam. I think there’s someone I can introduce you to. Meet me here at this time.” It was very short and very cryptic. The person he was gonna introduce Adam to was Seymour Stein of all people because Seymour’s daughter was being treated by this doctor at Duke. Dr. Friedman reaches out to Seymour without even hearing our band’s music just as a favor to Adam because he knows he’s friends with his kids. The doctor says, “There’s this band in Durham I think you should listen to.”
BH: He said, “They’ll be up in New York. Can you take a meeting?”
EH: As a total courtesy, Seymour sees us in his office. He didn’t expect anything. We get up into his office and we have a couple of acoustic guitars and we start playing our first song, “Hey, Hey, Hey,” which starts out four part harmony and within the first five seconds he says, “Stop!” We freak out because we know his history. We think we’ve blown the audition, but then he picks up the phone and calls people saying, “Get in here. You have to hear this! This is so beautiful!” It was really touching us because he’s such a song guy. After every song he’s saying, “That was a beautiful song. It reminded me of this artist from the ‘50s you might have never heard of, but he’s brilliant. Can you play another song? I’d love to hear another song.” We played in his office for about an hour.
BH: I get chills even when I tell the whole story.
EH: We feel very lucky. Luck is a big part of our story.