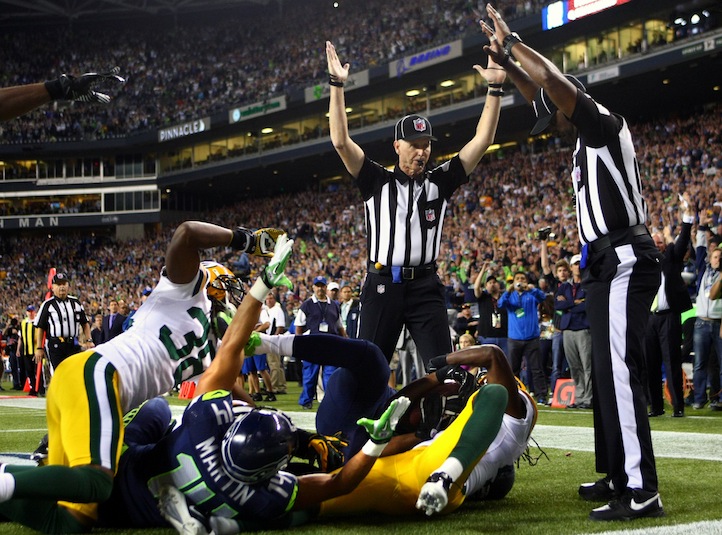 Monday Night Football’s controversial ruling between the Seattle Seahawks and the Green Bay Packers revved up the national coverage of the replacement ref debacle and seemingly has forced the NFL to do right by the players and the rest of its constituency.

The NFL so rarely makes a misstep. It’s careful and smart on how to trot the line. That’s why it was such a shock when the league issued a statement on Tuesday afternoon, affirming the replacement official’s contentious ruling that gave the Seahawks the last-second touchdown and the 14-12 win over Green Bay, Monday night. The league stood firm that the ruling would not be reversed. Instead of taking full accountability for their part in the fray, the league admitted one mistake (Golden Tate’s offensive pass interference) and took an end-around to avoid the other (Tate and M.D. Jennings “simultaneous” catch/interception). The response came nowhere close to suggesting that the league was embarrassed, humbled or deeply concerned by a game decided on two bad calls by incompetent referees. Fans and media members who watched the replay over and over again erupted in uproar, outrage and disgust that this type of crime could go unpunished.

The NFL and other major sports are popular mainly because professional sports are seen as a legitimate competition in which strategy and talent always trumps undermined ways. Legitimacy is what makes people consider the league a sport and the WWE, an entertainment circus. People tune in three times a week to see men battle it out so that the best team can leave the field the victor.

Outward pressures from the public and media often force companies to act. This afternoon, ESPN’s NFL Insider Chris Mortensen was the first to report that according to sources on both sides, the league and the NFL Referees Association (NFLRA) made enough progress in negotiations on Tuesday night that the possibility of the locked-out officials returning as early as Thursday, has been discussed. A tentative agreement in principle is at hand and the NFL could have something permanent in place by the end of the week.

In a tactic to restore the faith with its fans, the NFL has gotten he word out that negotiations with the real referees are complicated, but moving forward, which includes making some officials full time and the proposal by the referees’ union to start collecting a pension instead of a 401k. From a salary standpoint, the referees are asking for roughly $10 million a year, which comes out to a rounding error for a league that pulls in $10 billion in annual revenue.

Monday night’s fiasco had to change the league’s disposition. Despite the ink not being dry on a new deal as of yet, at least there is progress being made by both sides to rectify the situation. While the coaches, player, fans and the media, believe that the old officials are more skilled and versed in the rulebook, the NFL and the NFLRA are looking to implement a mentoring/training program, that would create a large pool of potential referees and would bench bad refs and replace them with competent officials. Seems like a suitable solution doesn’t it? Still, progress is being made and the national nightmare that has been the referee lockout appears headed to a conclusion.